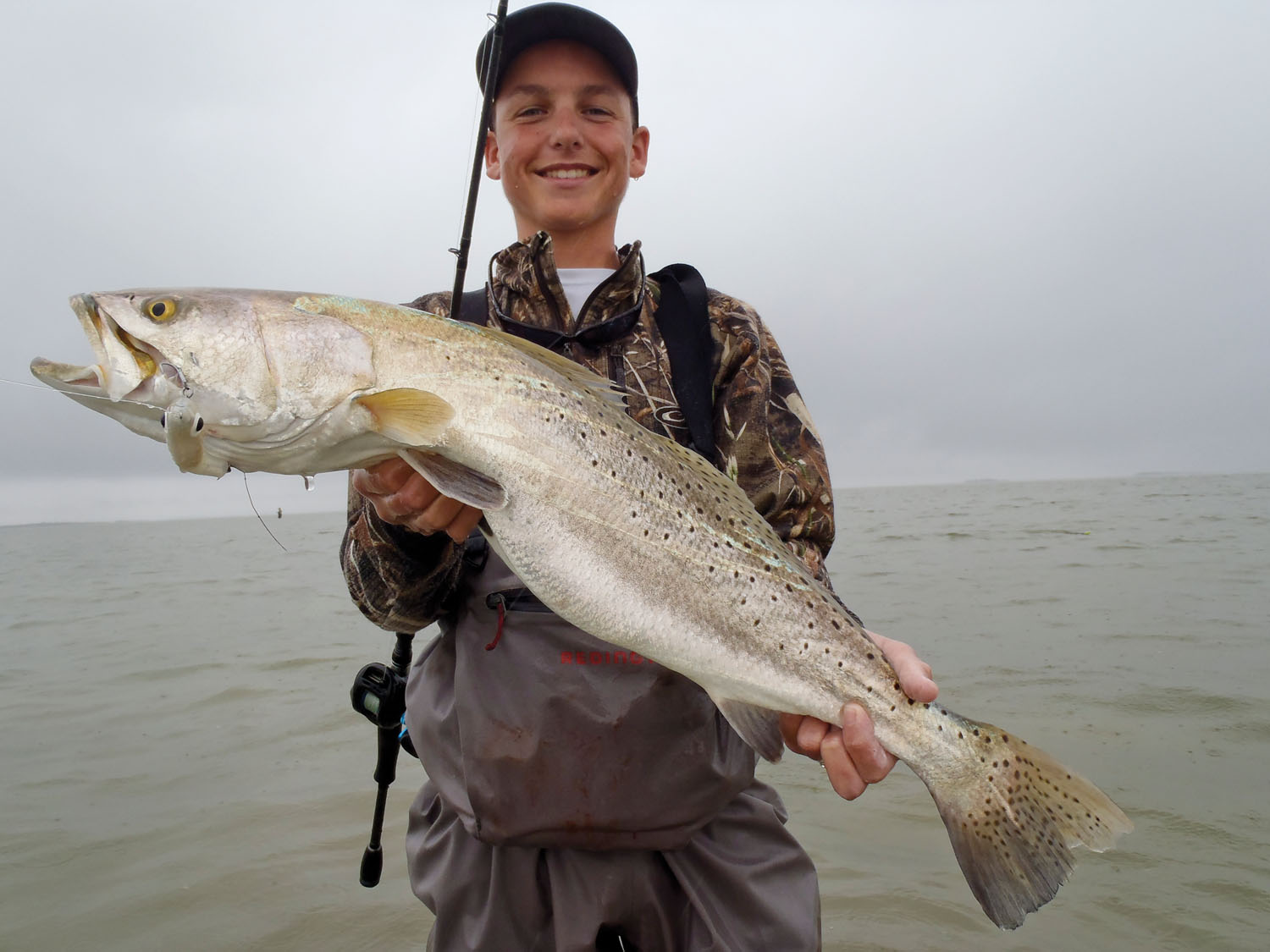 Eric Kuhn shows off his career-best trout. Kudos to Eric for eagerly releasing this beautiful fish.

Many articles have been written, several by me, on useful tactics anglers can employ to improve post-front fishing success. One of these is downsizing lures to entice the often-finicky trout bite. However, despite what others may say, and even though I have seen it and used it effectively myself, I will typically not resort to downsizing lures until all other options have been explored.

Good anglers can develop bad habits, just ask me. We become overly confident with baits that produce consistently, overlooking the advantage that a smaller offering might provide.

So, to set the stage – I want to refresh those not familiar with post-front conditions and the tough bite one can experience. Calm and clear is the norm in the wake of a front and this goes hand in hand with high atmospheric pressure. Any way you look at it, high pressure makes for tough fishing. Water turns air-clear due to lack of wind and tides are typically low. Add that the fish probably gorged as the front approached and have no urgent need to feed, yet. When trying to entice already well-fed trout basking under warming sunshine in clear water, to accept a lure, you have some work to do!

If water temperatures are not abnormally cold, trout might not need to move to the shallows to warm up. Fish acclimate to the cold and remain capable of feeding aggressively even though some, including me years ago, might believe they have become lethargic. I think this paints a fair picture, so let’s go fishing.

I got my first package of Bass Assassins from Jim Cooper, then owner of The Tackle Box in San Antonio, almost twenty-five years ago. These were the little 3-inch size, not the popular 5-inchers we use today. I had a slick-calm fall day after a rather strong early-season front. If my memory serves me, I had Glenn Martin from San Antonio fishing with me. Bait was present and a few slicks were popping as we moved along the shoreline between Long Reef Bend and Jay Bird. Bites did not come easily, even with significant evidence that fish were present.

Around noon we were working an area of scattered shell west of Jay Bird Point. After a short wade with slicks popping and receiving no bites, I went to the boat and retrieved that greasy bag of pumpkinseed-chartreuse 3-inch shad Bass Assassins. It was like magic, bites came quick and fierce. The smaller profile was evidently appealing whereas my old standby 5-inch Kelly Wiggler shrimptails were being ignored. Little did I know it was more about downsizing than brand. (Even though I became a diehard Bass Assassin man that day.) The lesson eventually sunk in but to this day I’m probably still one of the last in the group to make the switch. I’m hardheaded I guess, or maybe not too bright, in general.

Speaking of switching to smaller baits – Anglers can also downsize surface and suspending lures. MirrOlure offers the Top Dog floater, the medium-sized Top Dog Jr., and finally the Pups. Heddon has the Super Spook and Spook Jr. In the suspending category, we find the MirrOdine XL and the MirrOdine. The Corky line includes the Fat Boy, the Soft-Dine XL, and even smaller standard Soft-Dine. Going smaller with these lure types in post-front conditions might be more critical than with soft plastics.

There is little scientific evidence that would support trout with large baitfish in their stomachs preferring smaller offerings. It seems logical to me but, are trout capable of logical thought? This is a study for Dr. Greg Stunz and crew.

I have always believed that fish that have already fed are more likely to eat something small versus another large baitfish. This observation might actually have scientific merit as seldom in my career have I cleaned a trout with more than a single large baitfish in its stomach. Most have a large one and perhaps several much smaller.

Forage species vary in shape as well as size, and this often leads me to trying different lure shapes. Mullet are shaped very differently than menhaden, shrimp are different than crabs, eels and ballyhoo, etc. Much can be gained by examining stomach contents of trout at the cleaning table. Freshwater fly anglers routinely pump the stomachs of fish in attempt to “match the hatch” with their flies.

We might also consider downsizing the diameter of leader materials and increasing the length of our leaders when targeting finicky post-front fish. Bass fishermen have been doing this for years. While I seldom downsize the diameter of my leader material, you can bet that I increase leader length whenever conditions warrant.

For anglers with deeper pockets, one can even consider going to a lighter action rod for greater finesse in presenting smaller lures. I apply this trick often when facing tough post-front weather patterns. I use a 6’-6” Henri Custom – Jay Watkins Series – CS. Waterloo makes the 6”-7” HP Light in medium-light action which is also excellent for this application.

We should also consider downsizing our wading areas. This will involve some scouting and planning on the angler’s part. You need to choose an area that has the proper bottom structure, some bottom contour, bait presence, referencing the Solunar Table, and a magnum dose of patience to pull it off.

Personally, I try to work the edges of the areas I choose, depending on the wind direction. If I am fishing alone I seldom enter the sweet spot, trying to work the area from the perimeter. Long casts laid across the wind or even into the wind when possible are preferred. I can’t always do this when I have 3 to 5 guys in the water.

If I had my choice, wanting to put myself in position to catch that special fish, I would also downsize the amount of time spent “fishing stupid” and work on “fishing smarter.” Why burn up all your energy fishing hard in harsh winter weather through low probability periods, when you can concentrate instead on major and minor feeding times?

I am not a fish at night or run 50 mph in the dark kind of guide trying to beat others to the spot. I tend to be confident enough to try and locate other areas and be there at the right time. Timing is critical to all that we do when trying to put ourselves in that special place where those few special fish reside.

As I have said many times, no single downsizing tactic is the key but applying many, if not all of them together, makes a noticeable difference in fishing success. So, the next time you find yourself fishing a bluebird winter day under post-front conditions, try some of the tips we have talked about. It can’t hurt.

May your fishing always be catching!-Guide Jay Watkins