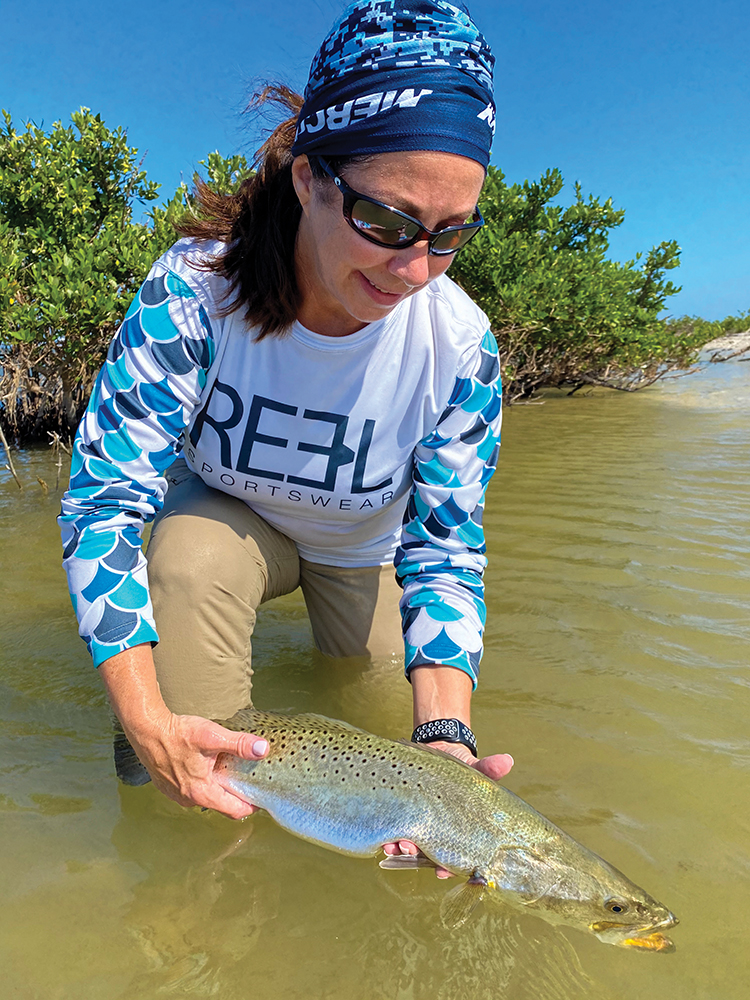 My lovely better half, Miss Renee, with nice trout along windward spoil - CPR.

The season begins way before the first official day of fall. I start seeing blue-winged teal in August, along with a few flights of pintail and wigeon. Brad Smythe, one of Rockport’s best-ever duck guides, says the arrival of waterfowl signals the approach of weather changes days before the weather actually arrives. Jay Ray worked for Brad as a deckhand and I greatly appreciate the way Brad kept him on the straight and narrow. He was a great role model and I will always respect him for that.

Brad and I would touch base on the duck migration as we saw it occurring. He could tell by my description of how high the ducks were flying and their flight pattern whether they were incoming migrants or local birds relocating. I was always amazed at how accurate the ducks were. I learned to pre-pattern my fall fishing strategies by what the migrating ducks were showing us was to come. Might be hard for many to believe but Brad and I believed in it.

I like to concentrate my efforts on windward spoils or shorelines where water ranges from about 18 inches to 3 feet over a distance of 50 to 75 yards. Within this span I need to see a lane – a fish highway if you will – at least 2 to 5 feet in width, along a heavy grass edge prior to the start of the sand. Next would be a broken bottom of grass and sand in the 2 ½ to 3 foot depth zone. Finally, a slight drop-off, distinct enough to feel as we walk into it. I want deeper individual grassbeds out here, and prefer that they be scattered in nature. The more scattered they are the more likely the trout are to be concentrated on each of them. Think of this as sight-casting to the structure. We can predict and anticipate where the strikes will be encountered.

Tide levels can be high as long as the shoreline sand remains exposed and continues to create a wall or barrier. Big trout will get extremely shallow despite what many might believe. I watched Jay Ray and his guys catch 7-plus pounders one day on floating Custom Corkys in 53° water, that was barely shin deep. During the milder months of the fall, trout will at times be shallow enough to see their backs out of the water. Fishing super skinny like this requires stealth at every level, but that’s an entirely other article.

I prefer winds to be strong enough to push water onto the shoreline. A slight chop never hurts us when the water is clear. We need a food source but the bait doesn’t have to be in the fish highway. The reason for this is simple. As the bait moves throughout the morning, the trout will set up in areas that the baitfish must cross when moving from one area to another.

Trout can be harder to catch due to light penetration, predation from above, boat traffic, and a full stomach. Trick is a better word; we only catch the truly big ones because we trick them first. I’ll give them a larger bait early but honestly prefer sticking with lures smaller than five inches. I’ll downsize as the bite slows. Diminished activity from bait and birds are sure signs of diminished feeding and movement. Africa’s plains antelope are less afraid of sleeping lions than ones roaming. When trout roam, baitfish take notice, and so should you.

Going from your favorite topwater or Fat Boy to a smaller soft plastic offering is hard for some trout aficionados to do. I know this. I also know the best of the best, and ALL of them will go small when needed. This knowledge and discipline is what separates them from all the rest. What’s funny to me is that the window for downsizing lures is usually short. To me, it’s when they’ve already fed and moving to another area. Once they relocate and settle in we can go back to our larger favorites.

It is a misnomer that trout always start out shallow early in the morning when water temperatures are suitable. They acclimate to cold and can lie in wait in cold, shallow water if that is where the food is. If it’s too cold early, they will pull up later in the day as the shallow water warms. Nighttime cooling in fall is not as pronounced as summer, so I typically start shallow and work my way to deeper water. Downsizing lures can be very critical when fish are super shallow. Many times the noise of a large topwater hitting the surface is enough to put the largest trout on high alert. When in high-alert mode, tricking becomes tricky! I wade as quietly as I can; no place for track stars here.

I like to stand at slight angles to the wind and cast from deep to shallow. I prefer NOT to stand on or in the line where I feel the fish will be moving. As bait activity or the bite slows I will slowly work my way out to the drop-off, working the intermediate depths carefully as I go. Bites can come quick from fish that are moving from one position to another. I have been fortunate enough to see large trout turn on a lure as she is making her way from one zone to the next. Many times these are very quick takes so be ready. Also, there is usually no follow-up bite if the strike is missed. Just for your notes, singles are harder to catch than multiple fish. Competition for bait creates more aggression when fish are traveling as a group.

In the lure department, you’re going to want the following lineup in your wading box. MirrOlure Lil John, both the smaller original and the XL. A few 5” Provokers and several Texas Customs 1/16-ounce jigheads, I prefer watermelon and black. You will also want a couple of Texas Customs Double Ds and Custom Corkys to cover the floating, swimming and suspending category.

Re-sizing our lures, both up and down, is probably going to be in the cards many days as we experience significant changes in the fall weather pattern. This can be especially true as regards barometric pressure. High skies with no clouds, light winds, and high pressure, definitely calls for downsizing. Likewise- heavy overcast with average wind and lower pressure calls for larger profiles and some of that “noise factor” stuff.

Throughout the day we have to continue to monitor all depth zones in the areas we are fishing. Areas previously determined to be non-productive can quickly become productive during optimal conditions and/or peak solunar feeding periods. This is why we don’t want to chop up our water if we can avoid it. Wade slow and easy and idle the boat a good distance offshore when making a move. Burning an area will show you more fish but wading and chunking will catch them, and enable you to catch more. I have old school knowledge that allows me the luxury of confidence without having to actually see the fish. I suggest that young fishermen put in the water time and concentrate on fine tuning their fishing and fish-finding skills the old fashion way. You’ll be a much better fisherman at the end of the day, I promise.

So, weather patterns are going to be changing and with those changes the fish will react, which means we too must react. It’s like a game of chess, we have to think about every move. Predicting what their next move will be is where problems can arise.