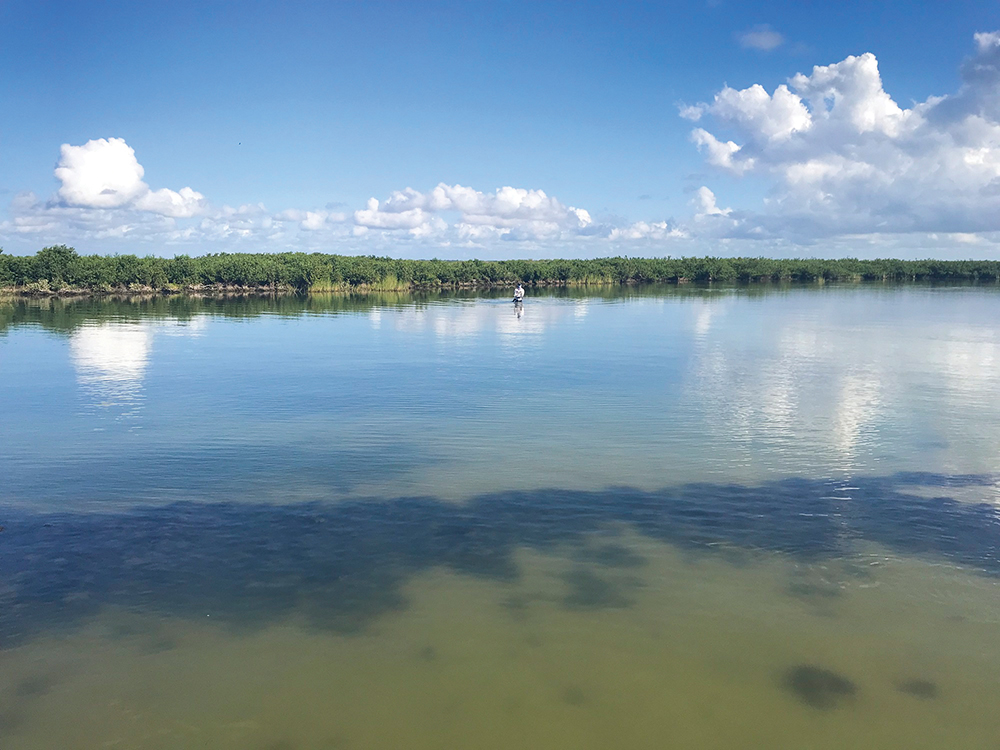 Air-clear and calm with tough written all over it.

I hope everyone is enjoying the New Year; 2019 went by in a flash, so I guess the old adage that time flies remains true. I celebrated my 62nd birthday in December and have honestly never felt better. Sure, tired at day’s end, but give me a good night’s rest and I am ready for another day. I am blessed to truly love my career and be busier than ever at this stage of the game. I believe this is a reflection of the passion I still have for fishing and people.

Social media has brought me some new younger clients that are recharging this old guide’s outlook and I am very thankful for this. Several new sponsorships as well that are forcing me to up my game and inspiring me to continue to learn and pass these findings along to fishermen willing to learn something new. Thus far 2020 looks to be shaping up to be another busy year for me and Jay Ray and we are looking forward to seeing many of you onboard our boats.

So, what do you do over the next several months when your fishing day presents less than favorable post-front conditions? The simplest way for me to explain how I handle situations like this is to describe some of my recent trips.

To set the stage; the past year was drier than average, which means we received below average freshwater runoff and little staining of the water in the major bay systems around Rockport. I personally like fishing the stained stuff, so long as salinity levels remain above 18-ppt.

The lack of freshwater runoff, along with reduced algae levels due to earlier-than-normal arrival of colder weather, has created some downright super-clear bay waters. Add to this the scant amount of oystering activity in Aransas, Copano and westernmost portions of San Antonio Bay that normally contribute significant turbidity to our bay waters. Then we have the absence of tidal flow in Mesquite, northern Aransas, and southern San Antonio due to Cedar Bayou being closed. John Blaha reported recently that reopening of the bayou has been pushed back to 2021. Not what we wanted to hear, but it is what it is.

Along with all the above factors, add post-front high-atmospheric pressure, clear skies, and dead calm winds. Your day is setting up be super-tough. Two things which are positive, though, are the very early morning and late afternoon feeding possibilities. In the past we would often not leave the dock until 1:00 or 2:00 PM and fish until the sun went down. It was always amazing to see the drain mouths and windward shorelines come alive about an hour before sunset. Being able to take advantage of a late afternoon solunar feeding period just might save the day.

This past week, the temperature dropped into the upper-30s two nights in a row. The water temperature declined to 47° but recovered to the low-50s by late afternoon. Our early wade on the first day produced a handful of solid trout but the bite died after the sun was up. With almost identical conditions, our late afternoon wade the next day produced a dozen really good fish. On both occasions we had either a major or minor solunar feeding period that I believe boosted our success – the rest of day was a grind to say the least.

My groups all week asked what I thought our prospects might be, given the conditions we were facing. Ever the optimist, and firmly believing I can make fish bite even under tough conditions (if I can get a lure in front of them), I had to give my answer some careful thought. Here’s what I told them.

Under tough conditions, I look for small areas that might concentrate fish, believing that competition for food might get them to take a lure when they otherwise might not. One or two bites can set the tone on these super-tough days.

With little success another recent day guiding two very capable and seasoned anglers, I came to the conclusion that the fish were simply not where I thought they would be, although I still believe gamefish seldom stray too far from a stable and reliable food source. On this particular day we had few bites and caught only a few fish. The wind never blew more than 5 mph, tides were dead low, and water movement was literally zero.

The low tide situation is huge in my thinking as I believe trout have definite preferences for feeding in certain sections of the water column. No science to back this up, just forty years of experience fishing low tides that linger for extended periods. I tend to struggle during a prolonged low tide scenario, it messes with my mental game, and there’s no surer recipe for continued struggling than when you’re off your mental game.

The best strategy is believing in what you observe and then repeating what brought success. I was seriously doubting my mental game on the day with those two seasoned anglers until a late-afternoon wade in a swag that lies between two finger reefs. I noticed a slight water movement which indicated a falling tide. I honestly didn’t think it could get much lower but it seemed to be headed in that direction. With that air-clear water mentioned earlier, I could see every oyster shell and any signs of life between the reefs. Over the period of an hour I started seeing silver flashes moving into the slight current. Casting at an angle up-current allowed my lure to be presented naturally with the flow, in front of any feeding trout that might be present. I only caught four fish but all were on the edge of the slope to deeper water, along the edge of the shallower shell.

I believe the trout were coming up to meet the mullet – which reinforces my belief that predators never stray too far from a reliable food source – and that the darker edge of the deeper water put it all in motion. I have always preached the “deep and dark” theory when fishing clear water. Predation not only comes from beneath, but also from above. When the water is clear, calm, and shallow, death can definitely lurk from above. Hence the foundation of the “deep and dark” theory.

In high atmospheric pressure weather patterns, my suggestion is to concentrate your efforts early and late in your favorite areas. For the in-between hours, concentrate on deeper and darker water with close proximity to shallow feeding zones where current velocity will be increased due to the sudden decrease in depth. Pay close attention to not only the surface activity you might or might not be observing, but also what’s happening below the surface where you’re standing. Be acutely aware of each cast so that when a bite is received you can duplicate it precisely. Chances are you will catch more fish if you can repeat the process.

Lure-wise, under the less-than-primo conditions I’ve been describing, I’ll go to my MirrOlure Lil John on an 1/8 or 1/16 ounce Texas Custom Lures jighead. Other good choices are the Texas Custom Lures Double D, Custom Corky, and the new MirrOlure Fat Boy Pro. I find that during some of the toughest times a Double D or floating Custom Corky presented aggressively will draw reaction strikes when they have no inclination to feed.

Failure is part of the learning process; maybe the most beneficial part, so long as you can swallow your pride and learn from it rather than dwelling on it. In the trip I mentioned in this article, I failed my guys and it felt terrible, but losing has always felt terrible to me. I was obviously not good enough that day to get the job done but I was smart enough to know that I did not, and was then willing to search for answers that might reduce the odds on future days.

Fishing is one of the purest sports, the ultimate challenge, as it is subject to so many factors we will never be able to control. All one can do is learn to navigate through the tough days and maybe become more creative and make positive things happen when the situation demands this of us. I hope you enjoyed reading about my tough times. It’s meant to educate and let you know that even a guide with forty years of experience still suffers failure on tough days, the same as the average angler.