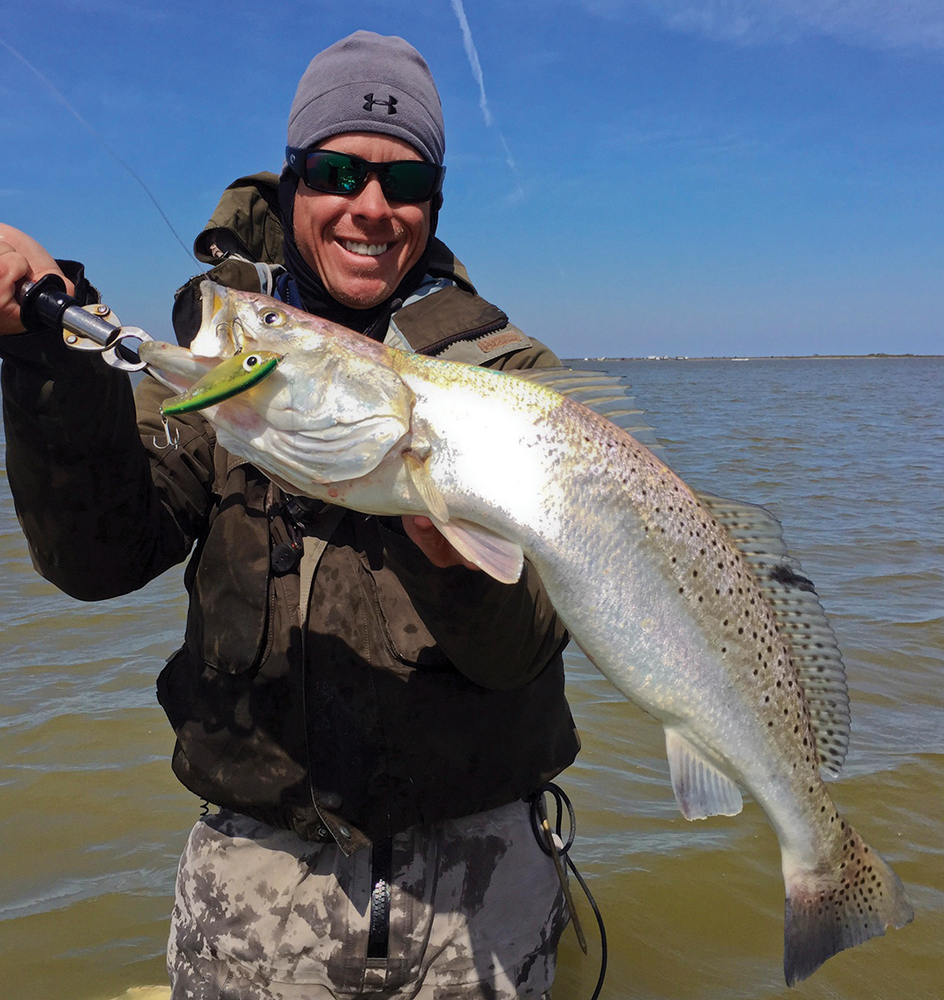 The end of 2018 and beginning of 2019 have proven to be cold and wet, more so than the previous few winters. Our local weather forecasters have been exceptionally accurate with their predictions lately, so kudos to those guys and gals. I personally prefer the wet over the dry, believing that years with abundant rainfall provide better fishing than the drier ones.

I am now in Port Mansfield, my winter home away from home, enjoying the friends I have here and entertaining my fishing club members as they seek that one very special fish. Prior to leaving, fishing had been great at Rockport. No really big trout but solid fish on a very consistent basis. There were definitely days when we had to work harder, and also times when the larger fish avoided our efforts, but seldom were we unable to find good numbers of solid trout to 20 inches along shoreline drop-offs and areas of shallow, scattered shell.

I have greatly enjoyed the number of clients this winter whose primary goal was to learn to become better anglers. I sometimes get too focused on so-called trophy trout in winter and neglect the wants of some who book with me. The truth is that most anglers, myself included, have zero problems catching two to three-pound trout when the larger ones seem to have the  feeding switch turned off. These gals eat in very small windows and are affected by weather changes to a large degree.  It seems to me that the smaller trout can be coaxed into eating even when the feeding clock is not showing the proper time.

I have always believed that trout of all sizes will feed more readily when they’re grouped tightly together – and so it is with the smaller ones – there’s just so many of them. Call it greedy behavior or whatever, competition for food puts them in eating mode more hours of the day.

Likewise, I have always believed that I was good enough to create a feed, so long as the fish would give me some idea that they are present in decent number in the area I was fishing. A single bite here and there or a few mullet flipping in the area is usually enough for me to gain confidence to set up and start the grind.

Yesterday began with a super slow start. The wind and water conditions were not helping us. I just couldn’t get comfortable with the areas that had been holding both bait and fish. It is very true during winter that a single mullet along a shoreline can show the way to extraordinary things. I’d get the guys out and start working but I could not get anything to happen that could sell me on the fish being present but not biting. Hey, I know they don’t bite every day; truth is they might only feed strongly every other day. One of the guys asked me what I was looking for that would lead me to believe that fish were present but not biting. I didn’t think about the question long at all and just said I would know when I saw it and would tell them what it was as it developed.

Around mid-morning I suggested a run around the shorelines for a looksee. Zero boats on that Tuesday morning, so I got shallow and started looking for bait and game fish holding close to the bottom in the 50° water. My brown pelican buddies were no help – sleeping and loafing all morning. Very little bait or fish in the shallows for about a mile, which suggested they were holding deeper.

I don’t like long-tapering shoreline drop-offs when the water is air clear and the wind is dead calm. What I do like are areas where either wind or current combine to provide assistance to the fish when feeding. I also like areas of deeper water where these two  factors can come into play.

In winter, I like slightly deeper and muddy areas that are influenced by wind-driven current, tide levels, water temperature changes, and actual tidal movements. Seems like a lot to ask for but there will almost be times during the day when we can find at least two of these factors working in concert.

Lots of folks get the idea that trout prefer mud in winter because it’s warmer, but I have come to believe it’s more about food availability. Mullet are filter feeders and mud holds a better food source for them. And, of course, trout will always follow the mullet. I touched on this in an article a few months ago.

On our second of such stops, just as I eased over the side, I noticed a mullet flip right along the shoreline where the mud met the sand and grass bottom. Water was slightly sanded up due to the muddy bottom and the previous days higher winds. Air temperature was 64° and the water was 51° at that time. Winds were dead-calm and the tide was slack but we were entering a Moonrise Minor feeding period.

I had been using a 5” Bass Assassin but dropped down to a Lil John as soon as I realized the bites were very light and tentative. I quickly instructed the guys to downsize their lures. I prefer the rattail plastics way more than the paddletails for tough bite days. I can’t really say why except that I personally catch more fish on them.

Once in the water I saw a mullet and then another on the same line as the first. Within a few casts I felt a very light tap on the lure. “Definitely a take,” I said to myself. “And right on the line where mullet appear to be active.” Stop! Don’t take another step!

Some guys have trouble planting their feet. So, I ask this question to help them understand: If you were sitting in a boat and caught a fish, would you pull the anchor and move up ten feet before making another cast? No way! You’d throw right back to the same spot. The lightbulb usually comes on pretty quick.

It works most of the time, unless there’s track star in the group. He’s the guy that takes three or four steps forward with every cast – bite or no bite – fish or no fish.

I don’t get along with this type very well, and rather than let him screw it up for the whole group, I casually suggest he might want to scout the shallows along the shoreline for tailing reds. He’ll usually be happier doing that and so will the rest of us.

So, the bite started slow with some really good reds on the line were the bait was jumping but we soon discovered there were trout just offshore that line in slightly deeper water. You literally had to let the bait get to the bottom and then lightly “dust” the bottom with the small rattail on the 1/16-ounce 2/0 jighead.

I’m a big believer in high-modulus rods with fast action for this type of fishing. Steve Henriksen with Henri Custom Rods makes mine and Jay Ray’s rods but, Waterloo, G-Loomis and Sarge also make quality sticks that I see coming aboard my boat on a regular basis. Make sure your rod maker or tackle dealer knows what types of lures you are wanting to throw; it definitely makes a difference in your ability to make the lure perform at the level it needs to in order to get the most bites.

Back on the line with my group, one bite led to another, and then hookups and multiple hookups. Over a two hour period, three of us caught at least thirty-plus solid slot trout and eight upper slot reds. Through it all we never ranged more than 75 yards from the boat.

As the bite increased and the fish became more aggressive, we switched to the Custom Soft-Dine. I really wanted to try a Custom Corky Fat Boy but thinking back to that small profile concept that worked so well earlier we opted for the smaller Soft-Dine instead. That hunch was right on the money and several really solid trout to almost 4 pounds were landed.

Once the lure hit the water, I would allow the lure to sink on about a 5 or 6 second countdown. Then a quick but short rod tip twitch, almost a vibrating motion, followed by a quick turn and a half of the reel handle to gather slack. Let it fall again while lifting the rod slightly away from the falling lure. There will be a tiny bit of slack in the line but with braid you will still feel the thump.

This takes practice to master. As soon as you feel the fish take the lure, quickly reel down to the weight. Set the hook just as the rod begins to load. Take the fish off, release if you do not need fish, and repeat.