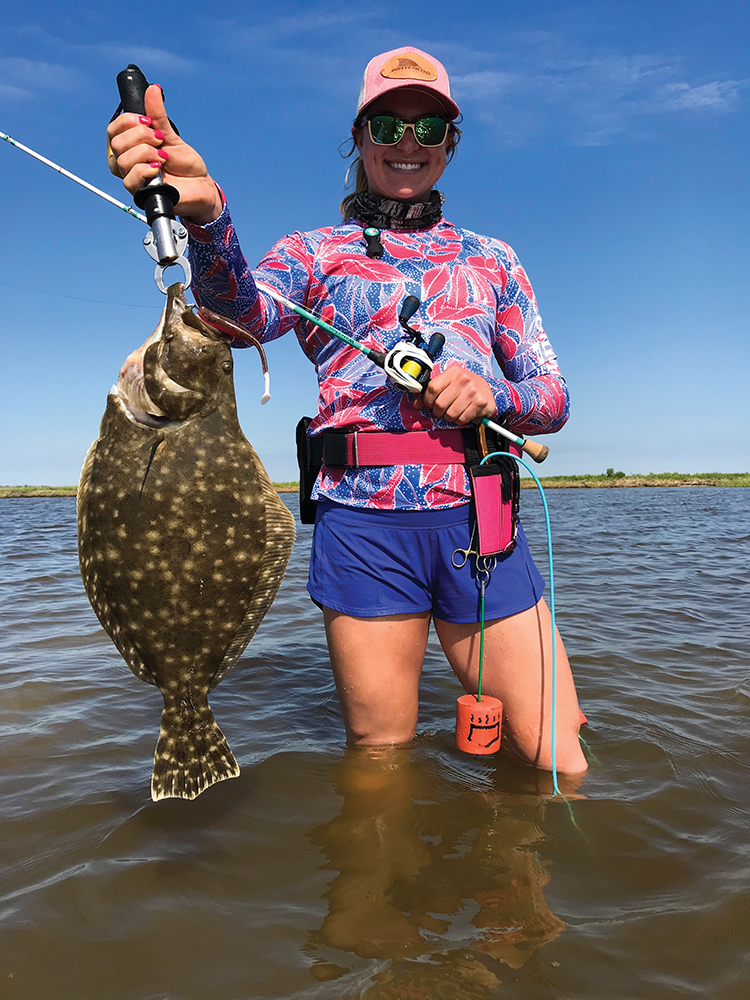 Taylor Fritz was pleased with this summertime flat fish.

As water temperatures begin to rise into the mid and upper 80s I start looking for areas of bottom structure that provide quick deep water access, shallow ambush opportunities, water movement, and cooler nighttime feeding possibilities. It’s a lot to ask of an area but we actually have plenty of them. Some of the best are shoreline and mid-bay reefs.

During dog days, mornings are mostly calm, so mid-bay reefs become a prime target. I frequently fish half-day charters to escape the afternoon heat. I go early and return to the dock much earlier than other times of the year. I tend to be more selective of the areas I plan to fish and allow these areas time to develop once setup. We learn so much if we pay attention to everything that happens each day and note the timetables in which they happen.

It took me a few seasons to learn productive strategies for small mid-bay reefs. There was a time I would pull up close enough to get out and wade, and we would move quickly toward the points of the reefs where consistent bites were often found. When the bite wasn’t happening I would be quick to return to the boat and head for another reef.

Many times as I was getting back to the boat I would notice my guys catching a few fish. Took a while for me to put a timeline on it but I eventually learned it might take 15 to 30 minutes of standing quietly near the end of the reef for the first fish to be caught. The longer we remained quiet, meaning that we were not crunching shell, the more fish we caught. I also discovered that drifting to the reef rather than motoring, and then walking on any available sandy or scattered shell bottom to reach the points created less disturbance and a shorter wait for the fish to turn on.

I typically look for reefs holding good numbers of mullet. Early morning, larger trout typically stage where water currents push bait to them, or they will sometimes stage directly under pods of mullet. It’s always awesome to see the bait begin to shy from what we believe to be the approach of our lure, when in reality a trout or two is following it and that’s what spooks the mullet. Sticking a better than average trout a few seconds later confirms this. When the water is clear and calm we can actually see the trout’s gills flare before we feel the strike. It’s a flash and an instant thump.

As the sun rises higher the baitfish will remain shallow but the trout will drop down to the deeper edges of the reef where the shell becomes scattered and the bottom turns to sand and then mud. By noon they’ll be even deeper, farther from the reef, staging on mud. We need heavier jigs in order to get the lure down to them as we slowly twitch it along bottom. Try to imagine vibrating the lure more than twitching. Quite often we crush the trout with this technique, once I get everybody dialed in.

Lures were very limited in my early days. We threw gold and silver Johnson Sprites and Tony Accetta spoons. I used the gold H5 with yellow and red bucktail. And, of course, we threw 51 and 52 Series MirrOlures. I was a big fan of the 51M - white with silver flash. To this day my favorite Custom Corky’s, Double D’s, and MirrOdines are white with gold or silver flash.

When I was a kid we had very few soft plastic baits. Ray’s Worms were my first, I think, and my favorite was root beer with yellow spots. Next was Boone’s that came out with Tout Tails, and then it was Kelly Wiggler and H&H Cocahoe Minnows. Soft plastics have come a long way the past 40 years. My favorites today are the MirrOlure Lil John, Lil John XL, and the 5” Provokers. I am also a big fan of the 5” Bass Assassin Shad. I have confidence in my ability to make these lures do what I need them to do.

The good thing about rattail baits is that I sometimes want a lure that creates as much or as little action as I need for the day’s conditions. I know it sounds crazy but I have years of shallow water sightcasting history that tells me there are times when a lure can have too much action, too much flash, and make too much noise. I am a huge believer in “less is more” if that makes any sense. These two brands work for me and at the end of the day that is how a lure earns a place in my tackle box.

I also have tremendous confidence in Texas Customs Double Ds. These baits swim very well, have a subtle rattle, and float slowly to the surface when paused. They are effective on both slow-roll and aggressive presentations. I love this lure in moving water over shell when bait is stacked on shallow reef crowns.

Last August, we had a couple weeks of terrific trout fishing in Copano Bay with Double Ds, over shallow sand and reefs where we found large concentrations of bait. The water around the reef structures was very clear and the bait was thick enough to foul hook them with regularity. What was cool was watching the baitfish bail as a trout charged our lures. Many times I would see the flash of the trout before feeling the strike. There are few things as exciting to a lure enthusiast than seeing the fish hammer his offering.

Right now we are experiencing some tough days due to elevated water temperatures and solunar feeding periods that do not align with our morning wading schedule. I try not to beat up the areas that I know are holding fish on a daily basis and I typically don’t do the dink thing – trying to scratch a box of keepers from a hundred small ones. Larger trout become increasingly unpredictable during tough years. The concept of running and hunting while fundamentally sound can also lead to a morning of searching and little catching.

During August through September, the best bite will often occur extremely early and for a brief period. Miss that window and you will likely struggle in the effort to make the day a successful one. I personally feel more confident when I know of numerous areas with high possibilities in order to be comfortable with the day’s prospects. Here in my fortieth year of guiding I still get highly upset when I fail for my clients. It happened twice this week and it killed me.

You’re right, they don’t bite every day, but at this stage of the game I feel that I should be able to put 15 to 20 fish days together no matter what. Just proves to me that I still have some work to do. I have never been shy about the fact that I like to be in control and find my own areas. I like knowing that after all these years my brain’s search engine can pull up dozens of files to solve puzzles related to tough conditions and seasonal patterns. Although changes occur yearly, the basic patterns can be trusted most of the time.

Jay Ray and I make a good team when tough sets in. With Ryan’s return to Rockport the Watkins fishing team is once again complete. Ryan is not guiding but has his license should he ever decide to take a trip here and there. This gives us three separate skill sets, all based on a sound foundation as to what the fish are doing on a daily basis. I talk with both of them daily, bouncing ideas and thoughts off their younger brains. What a wonderful life fishing is still providing me and the boys. Jay Ray brings raw grit and energy to the table and Ryan brings a thinking fisherman’s brain to our game. I am the combination of both, I think. Grit, yes, still some. Energy, a little less by midday, but my brain is definitely still my strongest suit at this stage of my career.

Summertime is when we have to do more of the little things right and typically have to do them early in the morning before the heat shuts the bite down. Narrow your lure selections to soft plastics and shallow running swimbaits, and work shallow structures with deep water access. You will also do well to concentrate early morning efforts in areas most likely to have nighttime feeding taking place – shallow coves and shorelines with thick bottom grass. As the morning progresses, fish will typically be found where the carpet of grass gives way to sandy bottom along the drop-off toward deeper water. Be patient and work these areas thoroughly.

I often suggest picking an area and spending the entire morning, allowing a pattern to develop as the day progresses. This can sometimes cost you but when one is able to experience one pattern developing into another the knowledge and confidence gained is priceless. With this new knowledge an angler can expand his search to other areas of similar makeup. I hope what I’ve had to say here helps get you through the tougher days of summer.