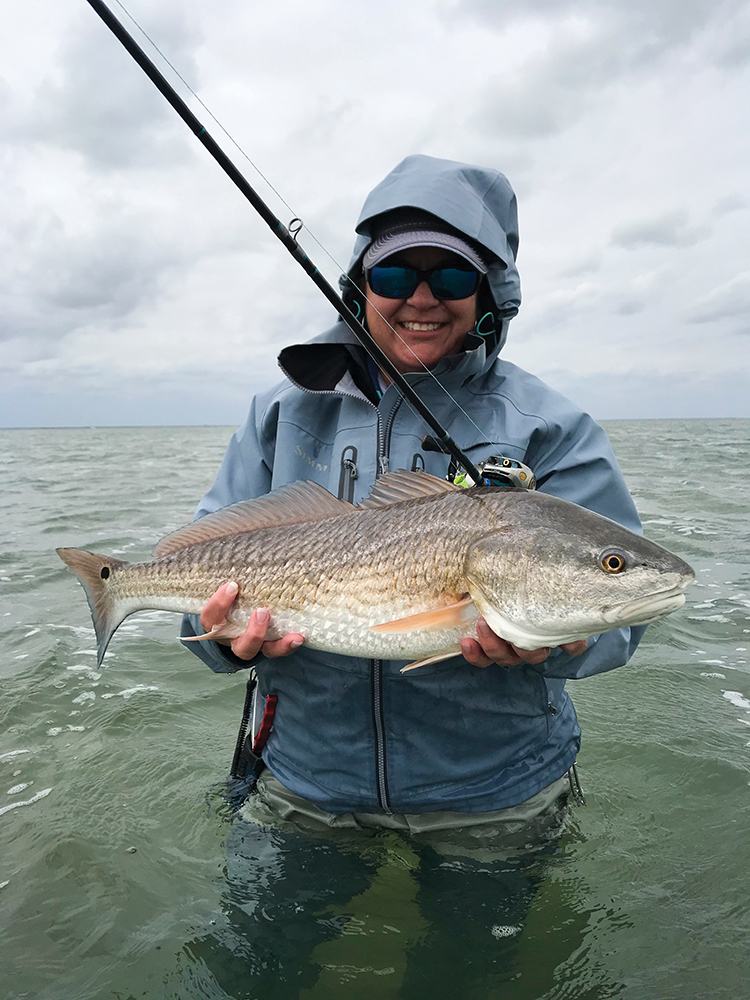 Lisa Laskowski was our redfish queen this day.

Over the past couple of years I have had an increasing number of people hiring me to teach and coach them to become better anglers. Funny how my career has changed over the span of nearly 40 years. My qualifications as a teacher or coach did not come by design. My dad was both a teacher and a coach but that hardly qualifies me as either one. I certainly possess the mentality common in good teachers and coaches. That is the mentality to produce winners in life; and that is what sports of all kinds is supposed to instill in a person.

Sports can be seen as a preview to life; practice makes closer to perfect; we learn to overcome failures and to be humble when we win. I started as a guide that tried to put my clients on the best and most fish I could each day. I was a single dad on and off, so at day’s end I went home to spend time with Jay Ray and Ryan. I seldom ever socialized with clients then, or now for that matter. Being dad came first and the fishing was secondary.

While on the water I gave each group the effort they were paying for. Not always the attention they were due but that came as I matured. It was said that I showed up to the dock with my game face on. That came from what I learned playing sports. I was not a star athlete nor do I consider myself a star guide. I am however a product of WANTING to be the best that I can be and it just so happens that is a fishing guide.

For the record, I know that my footprints on the shorelines were by no means the first. In fact, I am honored to have even had opportunity to step where so many greats before me have trod. Rockport old-timers like Bill Bardwell and Alve Wyatt, just to mention two. I mention them because my dad knew them and was always talking about their wade fishing adventures in Copano and Port Bay, where we fished most often in my youth, and also because their careers predated the positive influence of GCCA, now CCA.

The guide business has changed incredibly over the years. Rockport alone now has hundreds of fishing guides and there are hundreds more up and down the coast. The plain truth is that fishing pressure is changing the patterns of fish in our bays and only those willing to work outside the box can expect to achieve consistent results. These changes have allowed me opportunity to start teaching and coaching those interested in becoming better anglers. With the  investment we make nowadays just to get on the water, it only makes sense to get a little coaching if you’re struggling with your game.

I guess the teaching thing began with me making a statement one day that all my talking during a charter is really just me thinking aloud. Those that paid attention gained a little something each day. One of my groups made the comment after a successful but very windy day that they missed all the talking. Oh, I was talking, the wind was just keeping them from hearing me. I know there are probably days that some clients pray for the wind to pick up.

To be a good teacher and coach I must have students willing and wanting to learn. An open mind toward what I believe the best approach to the day is vitally important. Successful teachers and coaches typically have students that BELIEVE in them. I am very fortunate to have many anglers that believe in my fishing knowledge.

While teaching, I privately make mental notes on the type of rods, reels, and line the clients are using. Earlier in my career I was quick to express my opinion of their tackle. Maturity has taught me this is not a good way to start the day. I still revert to this once in a while but I am learning to hold my tongue. I still see some guys fishing with monofilament line which I no longer use. If you must use mono, please at least use Seaguar Invizx in shallow, clear water. I am a braided line guy but was probably one of the last to switch. In addition to their line I also make note of their knots. The weight and hook size of the jighead is also huge in my opinion for the water conditions and type of fishing I do.

I also focus on how my anglers rig their soft plastics on the jighead. So many ways to get it wrong and wrong just makes it more difficult. Add a tough bite and wrong turns difficult into nearly impossible. I believe it’s the little things that make the real difference.

Once in the water with my guys lined up for a wade, I observe continuously while I fish. I don’t want them spread out so far that I cannot see what they’re doing as we fish our way forward. They likely don’t even notice this. I can typically tell when someone gets a bite they did not detect. It’s crazy what the human eye can pick up once trained to see it.

I always try to watch and see if, after a bite, the angler checks the lure. Many times a bite tweaks the lure just enough to cause it to run improperly during the next retrieve. Just another one of those little things to look for that can cause you to miss an opportunity.

I don’t change my Corkys, MirrOlure Lil Johns and Provokers when catching fish until the bait just won’t run or sink properly. I honestly change baits very little during the day. I have a good working knowledge of what’s working under each day’s weather and water conditions, which is definitely an advantage. Changing lures constantly tells me the angler lacks confidence in their lure selection, which opens the door for a teaching moment. Confidence in lure selection comes with experience. I often tell clients that I would rather see them work on technique versus lure selection and color.

In order to truly teach and coach, it is imperative that I put my clients where they have the best chance of getting bites. Without bites every aspect of coaching goes out the window. Anglers must have confirmation that the lure they are presenting and the way they are working it are effective; receiving bites is confirmation. Sometimes a single bite is all it takes to kick the learning process into high gear.

My wife Renee said it best many years ago on one of our first fishing trips together. I explained that on that day I was not husband but coach. Coaches bark at players to get their attention and to gain respect. Respect by the way is earned through the coaching process as players start to see successes.  Anyway, with Renee, things were pretty easy as she was a very good athlete in both high school and throughout her adult life. Despite a bum knee she was still playing co-ed softball when we met. She understood coaching but we still had to work on the separation of me being her partner and her coach. I wanted her to catch them worse than she did, so I really had to concentrate on my coaching skills and not let my emotions play into the equation.

At one point during the fighting of a really good fish, I was telling her to get the rod tip up when the fish surged downward and then to the side when it came to the surface. Of course I was barking instructions. Finally, after repeatedly telling her how to fight the fish, she stopped and looked at me, “Which is it; UP or DOWN?” I learned a ton about coaching that day. What was obvious to me was totally foreign to her at her experience level. Today, I allow the day to develop, and as each situation presents itself I coach that situation at that time. It’s been one of the most rewarding things I have learned in the fishing business to date.

I love teaching all ages of anglers. I like kids. Well, let me rephrase; I like kids that have respect for their elders and those who spend their time and money trying to raise them up to become responsible adults. Have to say I am not a big fan of entitlement attitudes. One should be willing to work to achieve and more often than not worthy achievements require hard work.

I have guys that want me to take their kids, wives, and girlfriends and teach them the basics so they can better enjoy their days on the water together. I had a guy tell me one day that I was his son’s hero. “Gotta fix that,” I said, as we pushed off from the dock. “You need to be his hero and I’ll do my best to help with that.” I still fish with the now 44-year-old son and his dad is definitely his hero.

I look forward to each group that starts the day off by saying they are not so much interested in catching a bunch of fish as they are in learning something that will help them become better anglers. It’s rewarding that they believe I am qualified to provide that. This business continues to be the best thing that ever happened to me.