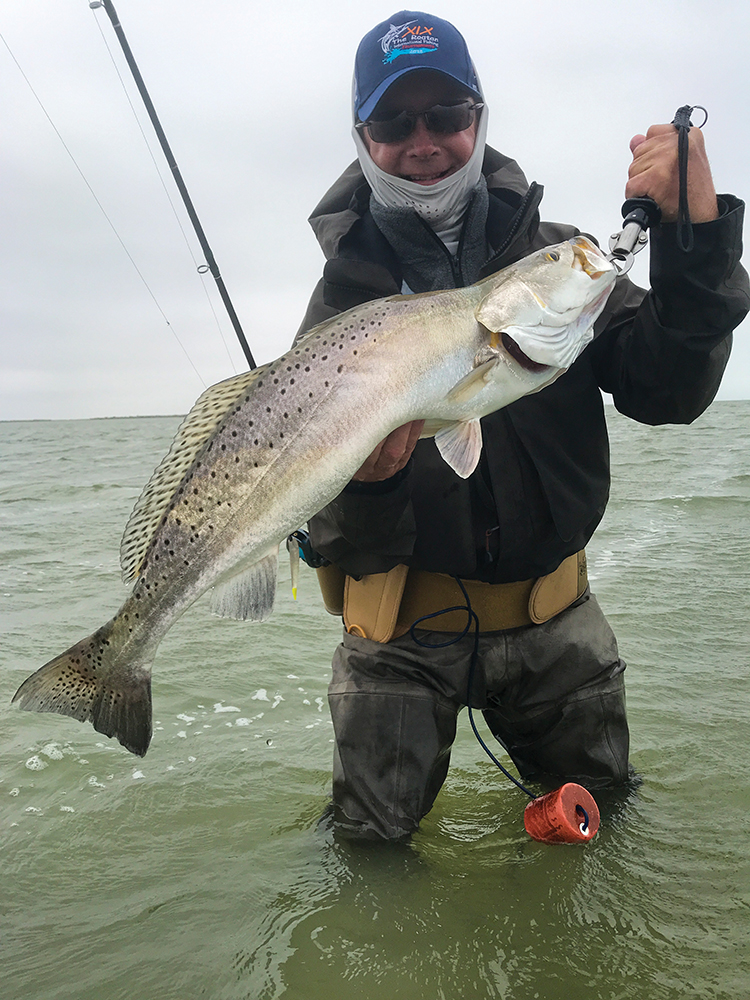 I search continuously for little things that can help us become better anglers and my fishing philosophy is definitely old school and basic compared to most of today’s younger crowd. I believe in sticking to proven game plans, basic blocking and tackling in football terms, and then adjusting to the conditions as needed. The conditions being your opponents if you’re still thinking football.

In this month’s article we will talk about two small aspects that many overlook. “If it looks good it probably is,” and, “Staying put once you’re in the right area at the proper time.”

My annual two month sojourn to Port Mansfield compels me to abide by the mindset that if it looks good it probably is. Remember that what looks good includes proper bottom structure with ambush points, and an ample food supply. Another key point is that just because there are no boats in an area doesn’t mean it does not hold potential.

Even though the water depths I fish here are similar to those in Rockport, the configuration of these bays is very different. Currents here are more the product of wind than tide. While there is tide movement through the East Cut that flows between spoil islands, I honestly don’t fish this area much during winter.

In my playbook the “looks good” approach applies more to working shorelines, flats, and drain mouths where it’s definitely more about wind-generated currents. I believe very strongly in the Solunar Tables but understand that to catch the right fish you must first be on the right fish.

Like my home waters, northeast wind in the Lower Laguna can create false tides and strong south-southeast wind can dump a flat quicker than you can imagine. It pays huge dividends if you understand and predict the effects of these water movements. I learned much of this by having to float or push the boat out of a flat that only a few hours earlier had more than enough water to easily jump up and run out. Tough lesson, right there. But one you’re not likely to forget.

Trout and redfish that live in these areas use these wind-generated currents to position themselves in deeper troughs and along the up-current sides of shallow bars on the flats for feeding opportunities under the conditions described in the paragraph above.

The features I have described can be seen on Google Earth, and I enjoyed the luxury of tutoring by Mike McBride and Tricia early in my learning curve down here to better understand what I was seeing on the screen.

So, my suggestion for you is that when you see something that looks good, try it. Get a feel for the area and see what happens. Trying new areas that look promising helps us become more area-oriented in our game planning versus simply being “spot” fishermen.

I am always amazed to see the flat come alive as the wind starts to move the water. It’s almost magical some days; nobody’s had a bite in an hour and suddenly we have three fish on at once. Just a few days back we were wading a flat with bait present but not active. About thirty minutes into the wade I hooked a solid 6-plus trout. Almost immediately, one of my guys on the opposite end of the line hooked up, and then the guy on my other side hooked up. We see this all the time and I suspect you have too.

Another thing I see is that after shutting the boat down in an area, we have to wade about 100 to 150 yards before the fish settle in to our presence and begin the feed. In today’s highly-pressured fisheries we see this distance increasing and I believe it is due to the increase in boating pressure.

Now let’s talk about staying put after receiving signals that your “looks good” area may actually turn out to be good. The knowledge I will share on this was gained over many years of guiding and tournament angling and time is of the essence in both of these worlds.

As a guide you only have so many feeding hours during a day and so many hours of productive effort from your anglers. Early in my career I tried to kill my clients. Not literally, but I fished them daylight ‘til dark. We got out in areas that looked good, that had produced in the past, and went to fishing. Those endeavors demonstrated great effort but lack of knowledge on my part. If the client was trying to justify hours to dollars he was happy, but too often the production was lacking. We just wrote if off by saying, “That’s why they call it fishing and not catching.”

During those long days I observed peaks and valleys in feeding activity even though I hadn’t yet learned to correlate those with the solunar table. But what might have worked on a daily guiding trip when there were no real time constraints, other than daylight and dark, did not work during tournament play. The restricted hours of fishing tournaments forced me to concentrate my efforts on much smaller areas and, due to fishing pressure from other tournament anglers, it forced us to stay in these smaller areas longer.

Back in the days of the Gulf Coast Trout Master tourneys it was not uncommon to have more than 200 anglers at each event. I think one year at Rockport we had 350. To top it off, those events were held on weekends. Which meant you not only had tournament anglers vying for places to fish but the weekend fishermen as well. It forced us to scout for areas that would produce during the tournament fishing hours and also where winning fish could be found. Fish and winning fish are totally different animals.

As our experience increased we discovered that working small areas VERY SLOWLY usually paid off sometime during the hours we were allowed to fish. Some feeding periods were longer than others, obviously majors and minors. As I gained success in the tournament game I always tried to identify what I had done differently than others in the field.

My dad was a coach and always told us that on Friday night we would play like we had practiced all week. I soon found that in tournament fishing I performed better on tournament day when I fished the way I’d practiced. I eventually reached an age where my want and need to fish tournaments became less important than my real source of income, which was guiding. I discovered that by fishing my clients as if we were fishing in a tournament, I fished more intelligently. I picked areas based on weather conditions, seasonal patterns, and fishing pressure. I monitored the solunar tables for every trip and paid close attention to weather forecasts and changes that would occur during the fishing day.

I became a teacher of what could make our day a success based on fishing smarter, not harder. Hard and smart are different but can be deadly in tandem. My dad told me before he passed, in the early days of my career, the adage of being lucky rather good wouldn’t work in the fishing business. “Luck runs out,” he told me. “So you better work at becoming good.” I never forgot it.

So becoming good takes hard work and an awareness of all that is happening around you. We cannot do this if we are sprinting across a flat or along a shoreline, hoping to cover enough water that the odds will turn in our favor. I am a huge believer in picking an area, reading what an area is trying to tell me, and devoting enough time to allow the area to develop.

I heard a client of Jay Ray’s tell him the other day that he would have never given an area the amount of time that they did that day. For the record, that gentleman caught a 30-plus personal best trout that day.

Typically, I line my guys up and coach constantly to those that I feel want to learn. “Move slow and easy,” I tell them. “The first bite stops everyone.”

I think aloud the whole time, mentioning everything I observe, trying to relate only to the positives, whether bait jumping or an osprey wheeling overhead. To start a day explaining why you’re not going to be successful is a defeatist attitude and leads to failure.

At the end of truly tough day; if asked, I’ll give the reason or reasons why I believe the fish did not eat for us, but seldom at the start of the day. Believing in your ability to interpret what you’re seeing and then reacting with knowledge and skill is huge. If there are any in a group of clients who do not believe that it’s all about fishing smart, I put them out on the end of the line and turn them loose. The results at the end of the day usually speak for themselves.