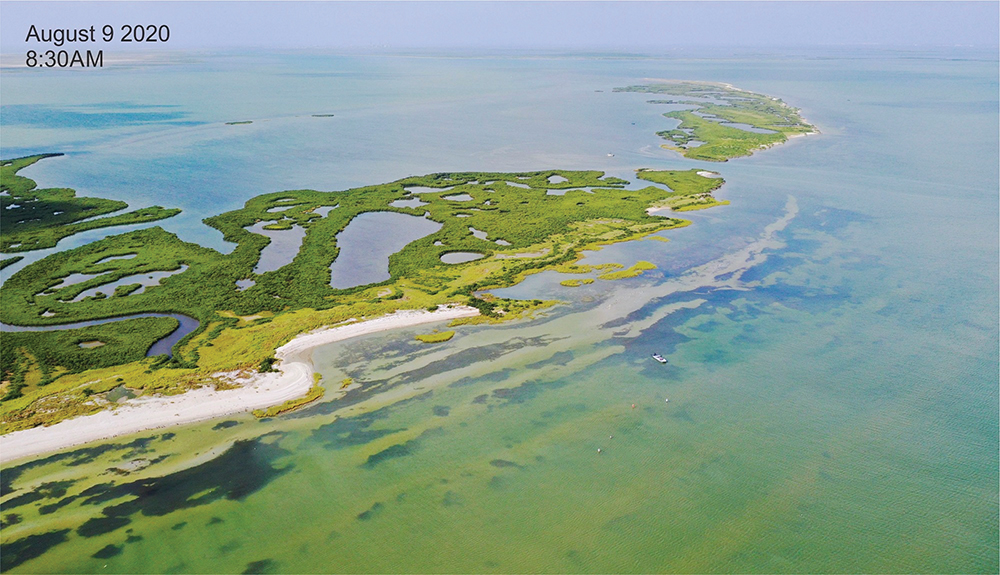 During the final weeks of September and early October we will begin to see the change from summer to fall with the passage of each mild front. I prefer to call it change; I never liked the word transition in this context. To better understand this we first need to understand that fish are in a constant state of change, daily and even hourly, due to changes in weather and water conditions. During this period some areas offer better fishing than others, and this forces me to be ever more vigilant every day of the delicate changes as they occur.

My dad taught me from a young age to put the day’s successes and failures behind me and look at each day as a new beginning. “You need to learn from both success and failure, but also be able to let both go,” he would say. Never has this been more important than with the pressure our fishery receives daily.

With the start of each day I am presented the question, “Where we headed captain?” Just so you know, I don’t like to be called captain. Just call me Jay. I’ll reserve the captain title for the real ones.

The tail end of September can be tough due to elevated water temperatures and seasonably low tides. Prolonged periods of low tide can boost our redfish success but hamper our trout bite. One would assume that when flats and back lakes are virtually dry, and the majority of the baitfish have moved to the drains and outer shorelines, redfish and trout would be equally abundant. Well, trout may be abundant but catching them, especially those in the 20-inch and longer class, can be difficult at best.

I see them and catch some here and there in the shallows with the redfish but it’s difficult to pattern. One pattern I have learned over the years about early fall fishing is the tendency for large trout to mingle with schools of redfish. My one double-digit trout from San Antonio Bay came during the last week of September, out of a school of mostly oversize redfish, as I worked slicking reds on my way back to the boat. Yes, slicking reds, you read that correctly. More on that later.

I released that fish but when I drifted down to my group they had found her floating. Efforts were made to revive her but the near 90° water temperature wouldn’t allow it. So, into the ice she went, with a handful of upper-slot reds. We didn’t carry Boga Grips back then, so I stopped by a local seafood shop on the way home to have her weighed. The scale said 10 pounds and 11 ounces. The lady at the counter asked if it was a big one. Really!

Getting back on the trout track, I start my day focusing on edges versus individual potholes or grassbeds. I can normally find mullet strung along the edges where heavier grass stops and broken bottom begins. I cannot see the edges distinctly in the low light but the mullet typically string along such edges and provide all the visual I need. Bites will almost always come directly under the larger schools of mullet.

Last September I had a particularly good morning in St. Charles Bay working this pattern. Winds were light and I could hear the mullet flipping and bumping into one another as my lure passed through them. I love the Texas Customs Double D for this application. The lure swims with just enough noise to draw attention and at a maximum running depth of less than 18 inches, and I can swim it under the mullet versus amongst them. The bait shudders to a halt on the pause, suspends momentarily, and then makes a slow ascent to the surface. Intermittent pauses, twitches, and short jerks create an almost irresistible action that on this day was met with unbelievable blasts. My guys were like…“You better have four more of those.”

The beauty of working defined edges is that the edge concentrates both bait and gamefish into very close quarters, creating smaller strike zones for anglers. I love working these edges but as a guide there can be times when the size of the group prohibits utilizing the pattern effectively.

I seldom, as in never, drop guys off to hopscotch with the group. One – I want to control the speed and direction of the wade. Two – I can’t help the guys if I can’t see what they need help with. Three – I like an audience when I am teaching. I also hope to never be labeled as that person that drops his buddies off in hope of blocking a large area.

I like to cast at angles to the structure. This allows the lure to be presented out in front of fish that are moving or facing in the opposite direction of our wade, which is more times than not the direction they are facing. To create the proper angle one must be in the proper positon in relation to the structure. It sets up like this.

I lead, but I stand back farther than my anglers. My second angler is to my left and slightly more forward, but still inside the edge. Angler three is left of angler two but a little closer to the edge. Angler four is the closest to the structure, so his and angler three’s casts are reaching beyond the edge and picking off fish that enter and exit the edge. Angler two and I are casting closer to the edge but also catching the upwind side of it due to being a greater distance away from it. This setup allows each angler the ability to work “unfished” water.

When an area of bait concentration is located, the group has to adjust accordingly by lining up in closer quarters and actually timing their cast as to not tangle or cross one another’s lane. For the record, it is not the duty of the angler that has a fish hooked to get his fish out of everyone’s way. It is your job to move out of the way as needed.

I suggest turning and walking to the side rather than backing up. Most anglers hit by stingrays are hit when backing up. Rays are known for following a mud trail and settling in dirty, recently disturbed water. It’s a lot to think about. There is more to wading as a group than just exiting the boat and taking off. If we wade slowly and observe carefully, the fish will tell us where we need to be, which will then tell us where and how to set up.

As the day progresses and with the sun rising, I will usually turn my attention toward the drop-off where the combination of rising water temperature, low tides, and seasonal migration patterns of redfish will have them schooling in numbers. It is pretty easy to spot these fish when schooling as they push along the drop-offs – smashing pods of baitfish and shrimp as the herd moves forward. Redfish are known for saving many a day during late September and October along the middle Texas coast.

Now, back to redfish making slicks. There is often a distinct pattern in which a sequence of two or three slicks will pop along a similar line, and mostly near a shoreline drop-off. Many times these slicks are created by reds when they have been spooked, not from feeding. It is way better odds of staying with the school if you locate the slicks and then set up a wade to intercept the line they’re traveling. Jay Ray and I won two IFA Redfish Tournaments working slicking reds while other boats ran right past them.

Most everyone that has ever fished with me knows I’m not a big fan of paddletail plastics. Yeah, they work, sometimes maybe better than what I am using. My rhythm, though, is best suited to rattails, and therein lies my confidence.

Old dog new tricks – I recently discovered the new and improved Marsh Minnow paddletail from MirrOlure. What I really like about it is the tougher connection between the body and tail that prevents pesky tail-biters nipping the tail off when fishing for reds over heavy grass. (Piggies and pinfish love heavy grass.) The Molting Sparkle and Golden Copper are my favorites so far.

Another good bait on shallow, heavily grassed flats is the MirrOlure Lil John, in Watermelon Red Glitter. You know me and my glitter. Lures with smaller profiles seem to work better for shallow-water redfish.

Wrapping up: Target shoreline edges for trout early where you find strings of mullet, and then move to deeper shoreline drop-offs with submerged grass as the sun rises.  For redfish, allow the daytime heating to drive them off the shallow grassbeds toward adjacent drop-offs. Despite seasonal changes, savvy anglers following the patterns described will find success when many others will not. Stay safe, stay distanced, and stay positive.