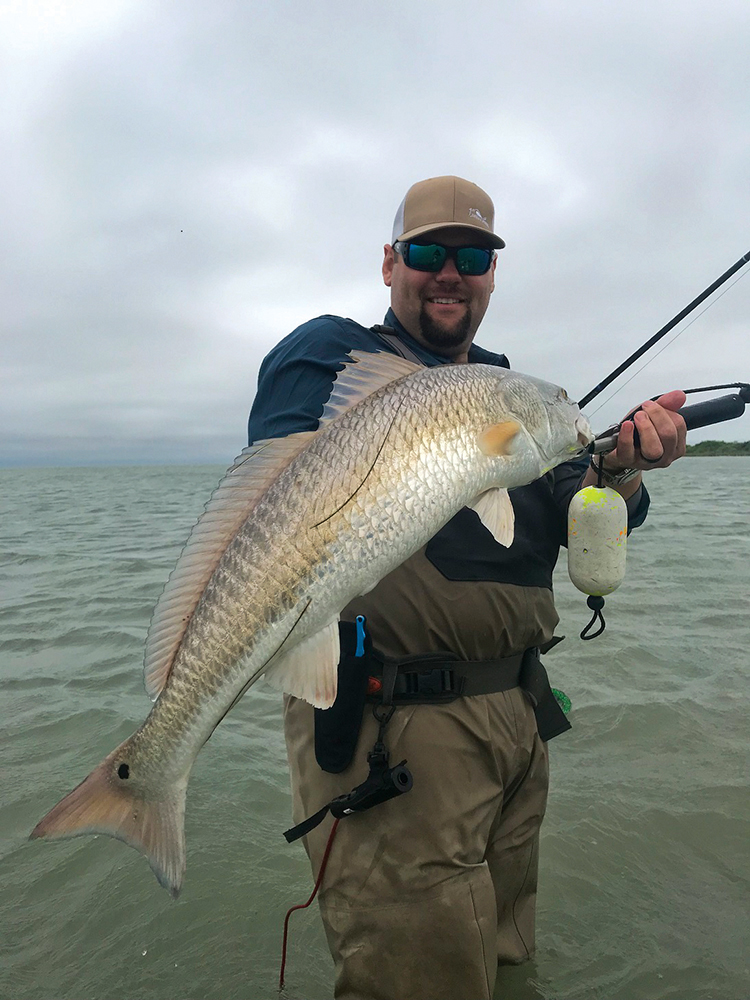 Unusually low tides following late but strong cold fronts hampered fishing for a few days this past month but, overall, fishing remains very consistent. Trout are in full spawning mode which makes it more important than ever to release upper-end fish after a quick photo. Winds continue very strong most days with 20+ SE more the norm than the exception. As spring leads into summer we will begin experiencing calmer wind overnight and during early morning. Time to play the shell game!

To me, reefs are the easiest of structure types to fish. I cut my teeth on Copano’s mid-bay reefs as a young boy with my dad. You will note than many reefs lie in a crescent shape and this is created by predominate SE wind. I doubt there is a bay in Texas that does not have a reef called Half Moon, and most generally lie east to west.

We also have reefs that run north and south. These were more often than not formed by dredging along the ICW, sometimes referred to as spoils or dumps. We also have spoil islands but that’s another topic for another time.

I prefer reefs that allow water to be pushed around points or through guts within the reef itself. Water movement is critical and the points and guts act as funnels that direct the flow and increase velocity. Bait presence is also an essential element in this game but remember that not all the bait the fish might be feeding on can be seen with the human eye.

During strong tidal movements, shrimp and menhaden will be ushered around points and through the guts. Gamefish stage both up-current and down-current of these structure features, lurking along the current seam for forage to be delivered to them. Gulls, terns and pelicans working over these features often provide clues for anglers to key on when bait is not otherwise visible.

I have reefs in several bay systems that I fish ONLY when birds are present, and others where I wade and work obvious ambush points ONLY when I see bait active on the surface. As mentioned earlier, I grew up fishing mostly reefs and mostly during the summer months. My dad was a high-school athletics coach and summer was when he had the most spare time.

My neighbors, Mr. and Mrs. Edwards, had a small skiff that we would use occasionally to wade the shallow reefs in Copano. I remember the mullet being stacked on top of the reefs when trout were present and no mullet when the trout were not there. Years later, Don and Donnie Frels and I would fish these same reefs and the same was true. Mullet stacked on top of the shell…trout present. No mullet…no trout. It’s still that way 35 years later on the very same reefs.

I have not put much effort into reef fishing since Harvey but expect considerable changes in reef configuration in Copano, Mission, and St. Charles as those bays were in the direct path of the storm. I do know that major reshaping occurred in Carlos and Mesquite bays – and very much for the better as far as catching is concerned.

Sharper drop-offs along reef edges, deeper passes between reefs, and new washouts within the reefs are clearly evident. The sharper edges and washouts seem to be the most attractive ambush points for gamefish.

Cedar Reef and Ayers reefs now have significant washouts that form points extending into deeper water. These points were formed by shell swept from the reef and deposited at the ends of the reefs, which left corresponding low spots where water now flows through. Terrific ambush points all for trout and redfish, I might add.

The magnitude of Harvey’s tidal surge added much-needed contour to many of the reefs in this area, and it is the contour that directs the amount of water and velocity of that water that so dramatically improves the fishing. During the summer months I look continuously for strong water movement that will improve my odds of catching fish in elevated water temperatures.

I also want to talk about a pattern I have mentioned in the past but deserves mention again when fishing mid-bay reefs located in proximity to the ICW and other major channels. The key to this summertime pattern is the displacement of water created by barge and ship traffic. I call it manmade tide.

Current is current no matter the source, and days without strong natural tide movement can be especially challenging. Reefs and spoils create structure where fish will congregate but we need water movement for them to feed, and this is where manmade tide enters the picture.

Many have been the days when wading an ICW spoil reef that we received no bites until a barge passed and triggered a brief feeding flurry. Once the line where the fish are holding has been established we would continue to catch a few here and there until the next barge came by and gave us another flurry. I have actually made a practice of picking up when the flurry ceased and motoring ahead of the barge, setting up before it arrived on the next spoil reef in its path. I know this might sound farfetched but it works.

The same is true on the Ship Channel spoils in Corpus Christi Bay. However, ships are a totally different animal. One must make certain that the boat is positioned in an area where large waves created by the ship’s displacement will not swamp or leave your boat high and dry. I have had both occur in early years and was lucky to learn quickly without anything too serious happening. I remember bailing water from my old Majek one day years ago with a large Dallas Cowboys plastic cup while my guys continued to fish. Close call for sure.

I like to anchor on the protected side of the reef. Try placing your Power Pole or anchor where the shell is mixed with sand or mud for better holding capability. Leaving the boat on the Power Pole alone works in many situations but deploying a Danforth or similar anchor WITH the Power Pole is even better.

Should your boat ever get loose while fishing a reef or spoil area; NEVER attempt to swim after it. Worst case scenario: boats can be replaced but you are too valuable to your family and friends to take the risk!

I like to walk off the reef where there is less shell on the bottom. Fish can definitely feel and/or hear you coming if you’re walking on shell. My dad called this, “crunching them off” and I use it frequently when teaching clients the finer points of wadefishing reefs.

You also want to give the reef a chance to settle once you’ve pulled up and gotten into the water. I think it may take as much as 20- to 30-minutes for the inhabitants of the reef to settle down and resume normal activity, especially feeding.

Drifting in quietly and setting anchor or Power Pole off the shell can reduce the time required for the reef to settle. Allow the bite to develop around you by wading slowly and fishing with purpose. Do these things during the summer months when fishing your favorite mid-bay reef and I‘ll bet you’ll see some improvements in not only numbers but also the size of the fish you catch.