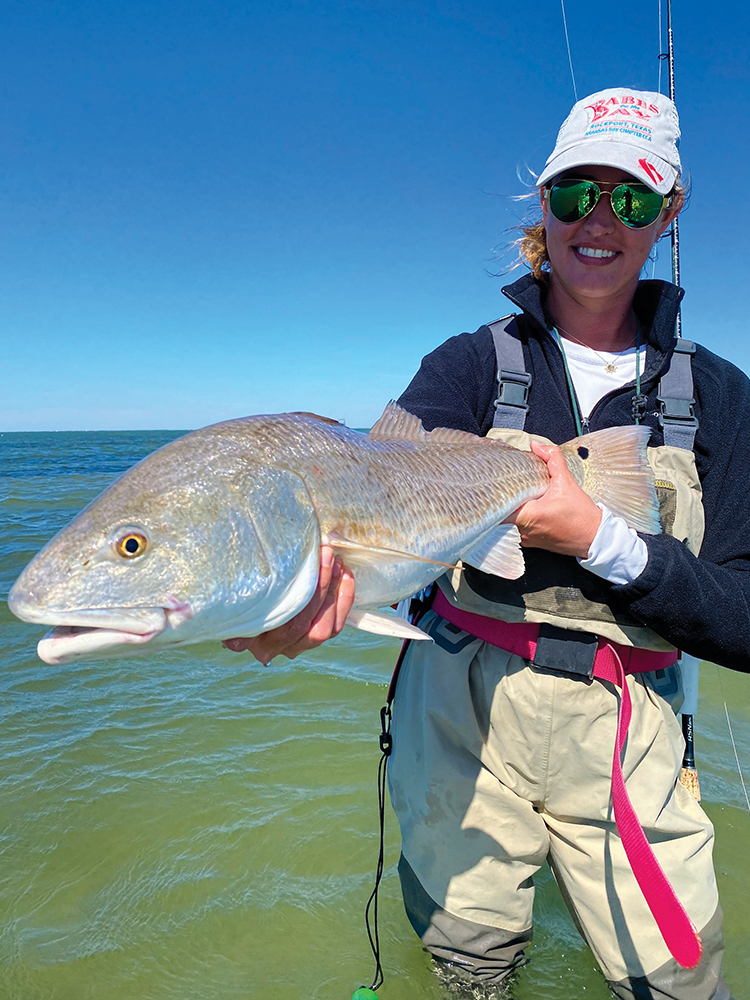 Lauren Sponsler preparing to release a great redfish to fight another day.

As I write this piece we’ve experienced very little cool weather and basically zero cold weather. The forecast for the next week is showing no significant frontal systems that would change much in my daily fishing strategies. After nearly 40 years at this gig, it’s true that I can plan from day to day as the weather pattern presents itself but that is not really who I am as a fisherman or a guide. With that said, I want to dig into my game plan for each day, from a fisherman’s viewpoint as well as a guide.

You might think they would be one and the same, and for that matter you might think that all guides are good fishermen. You want your guide to be both, for sure, and not too much of one and less of the other. There’s a nice common ground that we hope to find, that supplies all your needs for the day’s fishing. I will also say that I would want my guide to be a better fisherman than guide, if I could pick only one.

A great fisherman will unconsciously drag you right where you need to be if you’ll follow his lead. No doubt my strong suit was fishing and not guiding in the beginning of my career. To this day I know a lot of guides that are better guides than me from a perspective of taking care of the client’s physical and emotional needs. I kind of went off track a bit, so let me just stick to what I know and that’s winter fishing.

Thus far we’ve had no real winter conditions but it will happen, and when it does we need to be ready to act. Right now the water temperatures in Aransas Bay are nudging 70°. Daytime air temps are running low- to mid-80s and driving daytime water temperatures up slightly but cooler nighttime air is dropping  water temperatures each night in the shallows. I much prefer mid-50s morning water temps and then slight warming throughout the day. This will allow trout and baitfish alike to push into shallower water to warm and feed…or be fed on.

Warming trends, no matter how slight, create periods of shallow feeding during winter. Just a few days ago we eased into a pocket were a creek mouth was dumping warm water into the bay from a back lake. Trout to 4 pounds were literally nosed into the current where the water temperature (according to my boat’s gauge) rose almost 3 degrees. We could feel the difference through our waders and verified it when I pulled the boat into the area after fishing it.

Winter’s colder bay water temperatures trigger the movement and migration of many baitfish species to deeper water, and even out to the gulf surf, if they have access. Most of the larger mullet will stay in the bays through winter over soft, muddy bottom where decaying vegetation provides their food. The mullet then attract trout to the area as a primary food source first and foremost – not the warmer water temperatures. All fish acclimate to colder water temperatures and, once acclimated, will become very active, something I think many seem to overlook.

Ask any diehard topwater fishermen whether trout and reds can be caught in the months of December through February, even with colder water temperatures. However, we must also keep in mind that a sudden drop in water temperature will push trout to the deeper sections of the waters in which they reside. And yes, they can become lethargic for short periods of time, which can require anglers to slow everything down for a day or so. But, I promise, as the surrounding shallows begin to warm, the bait and gamefish alike will be quick to head there for warmth. During this warming period savvy anglers will find the best feeds from the best fish.

I remember a late afternoon on Second Chain of Islands in San Antonio Bay when my boys were junior-high age. We took every opportunity to fish when they were younger. It was a bitter cold December day and the boys were on Christmas break. It was cold enough to make your hands hurt until about 10:00am. Tides were low and waters clear due to 52° water temperature. Yes, we carried aquarium water temperature gauges on a string back then and it worked like a charm.

I knew the Second Chain held deeper troughs of water between long shell fingers that extend from the main reef structure. In days prior I had been catching some great trout along the fringes of the shallow shell flats and guts that lie to the south of these fingers. It’s really soft in spots on the south side of the back bone as well as in between the smaller guts to the south of the fingers. We went early because we wanted to spend all day fishing together and, honestly, back then I was still guessing a lot when it came to strategy.

Early in the day we fished the deeper muddy troughs, almost dragging Red Shad Bass Assassins along the bottom. Every once in a while we’d feel a slight tick on the line but not really a take. Around 10:00am, just about when we could feel our fingers, the tick became more of a light but distinctive thump. Quick reel-downs resulted in solid reds, and while I’m no doubt biased, my boys were natural fishermen and they caught them right along with me. Their Watkins and Adams genes no doubt contributed, plus they used the same rods, reels and lines I used. In short, they could feel what I felt in the bite category, something to remember when you want others to learn to become good anglers.

By about noon we began to get a few trout bites. With a light NE wind direction we were moving slowly to the south, leaving the trough and wading up on the shallower southern broken shell and gut-littered flat. Come early afternoon, and with midday sun warming our backs and the shallows, trout bites became more frequent and by 3:00pm the size of the trout increased dramatically. I was honestly amazed at the size of trout we were catching as this class of fish were not common in this area.

I noticed about halfway through the shallow bite that many of the larger fish had shrimp whiskers hanging out of their mouths. While cleaning fish we discovered these to be very large white shrimp, which I believed had long before exited the bays to spawn in the gulf. Truth is, Mother Nature covers all her bases, which might explain their presence along that reef that day. I must also admit that in those days I was unaware of the potential harm I was capable of with my rod and reel and we didn’t release many. Boy, have times changed. The upshot of the story is that a winter pattern was embedded in my brain that day. We allowed the conditions to develop around us, even though at the time I was quite unaware.

This past week, with 68° water temps, light winds, air-clear water, and a lingering dome of high atmospheric pressure, my bite has been early versus later in the day. This is due to a lack of suitable shallow feeding conditions for the apex predators we know our larger trout to be. On Monday, I knew the fish were present, everything was in place, bait lines, windward shoreline, deeper potholes and shoreline guts. Bites from larger trout were very light, brief hookups from fish that were BITING at the lure, but not turning on it and actually trying to EAT it. We had 3 or 4 big trout on but landed none. Struggling for bites, I moved to a smaller area of bottom structure hoping to find a better concentration of fish that would bite out of shear competitive nature. We chose to AIM SMALL and MISS SMALL, the subject of this month’s video clip. It worked like a charm with limits of trout caught in quick fashion but nothing over about 18 inches.

On the very next day we had some cloud cover developing as the barometer began to decline. On the very same flat we had totally opposite results. We caught and released five solid trout from 4.5- to 5.75-pounds, and numerous other from 18- to 22-inches on our first wade. All fish literally smashed our Bay Mistress and Pistachio Custom Corky Fat Boys. I returned to that area on Tuesday knowing the conditions had swung greatly in our favor. I also knew from Monday’s results that quality fish were present.

My winter lure selection will lean heavily toward Custom Corkys, Custom Soft-Dines and Texas Custom’s Double Ds. There’s only one Custom Corky and their color patterns meet all our middle to lower coast water conditions. I’ll throw the MirrOlure Lil Johns and Lil John XLs as well as the 5” Provokers and Bass Assassins in a heartbeat when the fish tell me to. Texas Custom’s 1/16-ounce 2/0 jigheads in Watermelon Red Glitter, Black Gold, Chartreuse-Blue Glitter are highly recommended.

As I have become older I have come to believe that I can make them eat what I want them to eat. Great when it works but a terrible habit that many experienced anglers often fall victim to. We have to let the fish establish each day what they want. In other words, have an open mind when it comes to your daily and even hourly lure selections.

Conditions of the day establish the game plan and it’ll be up to each angler to interpret the conditions and react accordingly. We learn just as much from our failures as we do from our successes. Failure is seldom fun but try seeing it as a victory from the standpoint that you are now aware of what does not work for the conditions at hand. The best anglers have short memories; they put both failure and success behind them at day’s end and move forward.