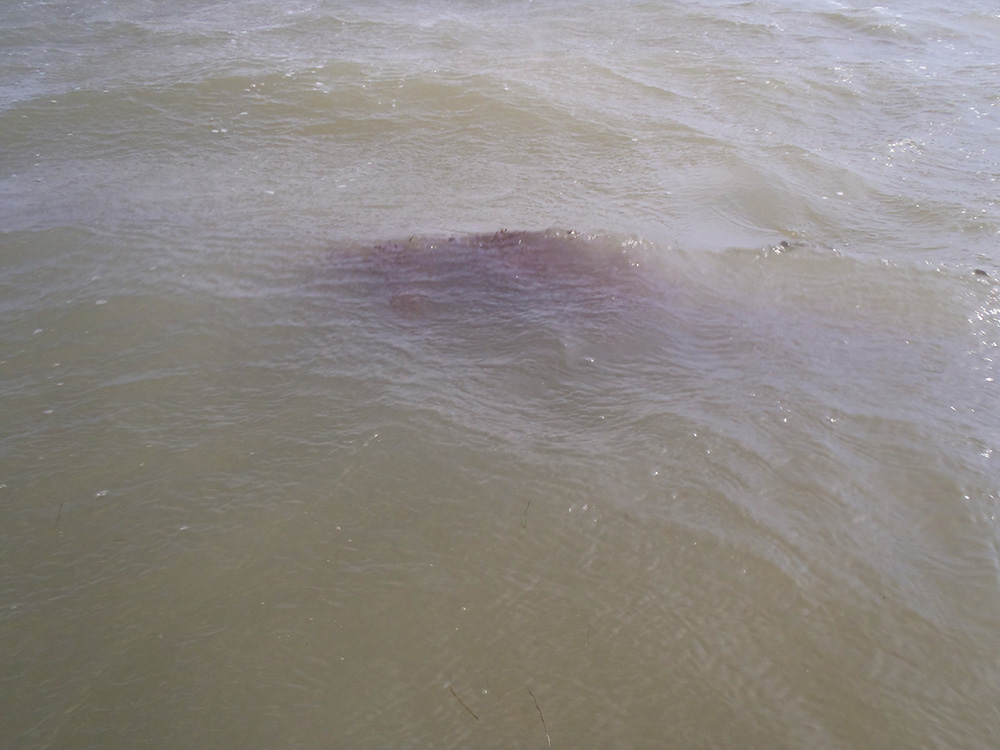 Here’s a good example of what I call “rolling” grass mats. We frequently see fish hiding under and alongside.

It seems that spring has arrived along the middle and lower Texas coast as fronts are becoming fewer and packing less punch. Overnight temperatures are running in the 50s and 60s; daytime temperatures are hedging toward the 80s on a regular basis. We will still receive the occasional front, some that will be shockingly cool, dropping overnight temps as much as 15 degrees or more.

I actually like seeing late-season frontal passages that prolong cooler water temperatures as we head into spring. I have discovered through my years of guiding that I like every season of the year and the unique challenges that come with each. I continue to be inspired to learn and pass what I learn along to anglers who are motivated to up their game.

I am still amazed how quickly seasonal weather patterns will change, like overnight at times. Our fish however cannot always be as quick to change and this can create some questions for all levels of anglers. Something else I have come to realize is the fact that even though I am very aware of this fact I continue to become frustrated when it happens, wanting to force feed them at times, even though instinct tells me this is not what I need to do. We’re talking transitional period here, and I know that I and others have already touched on this subject, so I won’t go into it too deeply. Let’s just say that transitional periods are simply the period of adjustment between major seasonal weather patterns and the impact they have on all marine life.

The other day while fishing on a charter with some really good guys, one of them asked why I was catching more fish than they were. We all had the same line of attack, same lures, same action and brand of rods, same reels and, possibly even the same braided line and leaders. The bottom structure on the flat in front of each angler was identical except for water clarity. While the water we were fishing was generally clear despite the strong wind, some of it was what we would refer to as air-clear.

Large to medium-size potholes amid thick to intermittent seagrass were the primary targets in front of each wader in the line. Some of the potholes were connected by narrow strips of sand. I instructed the guys to cast at angles to the wind rather than straight downwind. This allows the line to “bend” during the retrieve and can be useful in that it presents the lure in somewhat angular fashion to the structure being targeted.

Fish feed into current, whether tidal or wind-driven. Here again wind can be your friend, unless it’s blowing 30-plus. The angled cast will naturally present the bait to more fish staged on any given structure. This is due to the fact that it can be directed to pass in front of more fish staged at different places in the current than a simple straight-downwind cast can provide.

I also instructed the anglers to try and focus on scattered grass within the circumference of the larger potholes. Bending your cast where the wind aids in bringing the lure at a slight angle across this grass will often draw a strike. The narrow strips of sand that lie between potholes are also prime targets to hit.

I said to the angler that asked why I was catching more, “See that little strip of sand between those potholes? Watch this!” A few twitches of the lure, bending on the current as it came into the strip, was met with a solid thump. He smiled and said that I was pretty lucky.

Had the sand strip been in front of him I would have let him take the shot, but he was on my right and it was well off to my left. So yeah, there was some luck involved, getting the strike on the first cast, but more than luck was the cast being made to a likely piece of structure and allowing the current to bend it into a productive presentation.

Floating grass being formed into windrows by strong wind is another type of structure that can be very productive. Windrows of floating grass are a magnet for baitfish and small crabs. Between the windrows will be clean water that is tempting to work a lure through, but generally not as productive unless the windrows are only a few yards apart. Trout and reds will position under and along these windrows, using them as camouflage while they feed. I included a photo that I hope will demonstrate the windrow thing. More on floating grass: We sometimes see floating grass being driven by wind to form large mats on the surface. Savvy anglers will work the edges of these the same as windrows.

My lure selection for spring will be more focused on soft plastics most days. My 5-inch shad Bass Assassin, along with the 5-inch and 3-inch MirrOlure Provokers, Lil Johns and Lil John XLs, will get serious use.Custom MirrOlure Top Dog Jrs and She Pups, along with Custom MirrOdine XLs, will also see action when floating grass is not a problem. As is always the case, I will choose clear-bodied baits in clear water and on days with generally clear skies to slight overcast. In dirty water or on heavily overcast days, it’ll be a darker lure for me, more times than not.

No matter what the color of the water or sky conditions might be, I recommend keeping plenty of Plum, Watermelon-Red Glitter, Rootbeer, Magic Grass, Geaux Gleaux, Roach, and Bone Diamond on hand. I like keeping my lure selections small and my confidence high in my ability to get them to bite. Confidence still plays huge in my book no matter what the season or conditions.

Many thanks to all the fine residents of Port Mansfield for the hospitality and help many of you provide to me and Jay Ray during our winter stay in your small fishing community. We released most all your trout so they could spawn and continue to pass on the terrific genes these fish seem to possess. Your bay system may be the last true trout mecca left on our coast and we want to do our part to help conserve it for future generations.