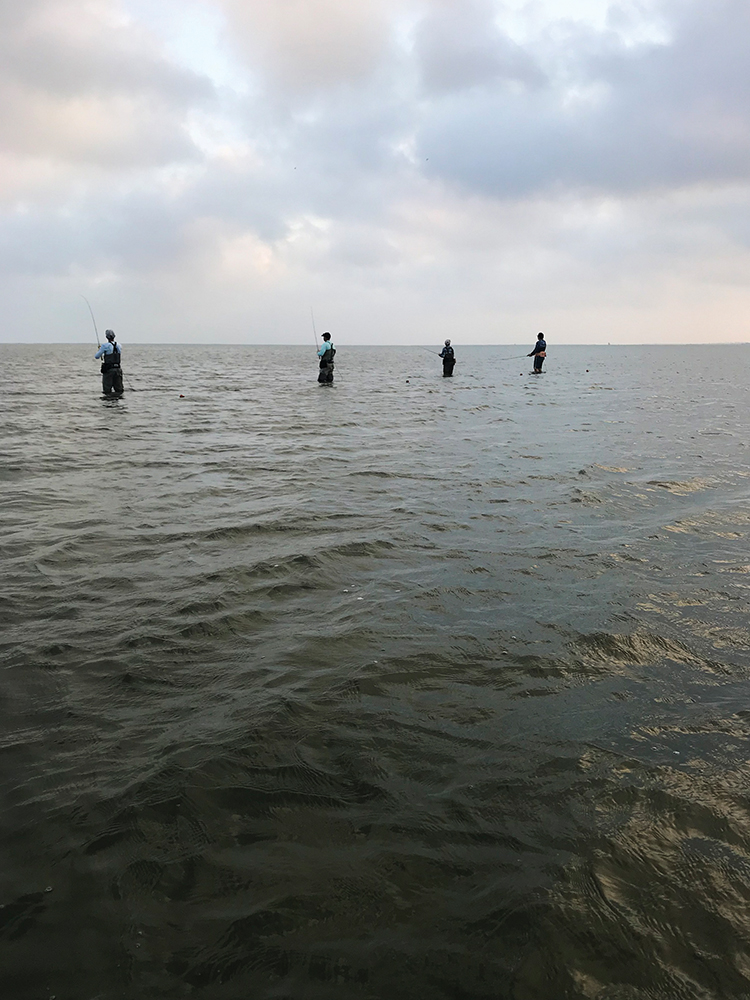 Getting farther into summer, days with elevated boat traffic and fishing pressure cause many to struggle to find productive areas to fish. I have always maintained that while I may not know all the areas fish might frequent in the bay during a season, I have knowledge of many areas. I also know when to be there. Let’s be honest, at this point in my career if I did not know these things there would be something seriously wrong.

The topics we are going to cover here have been mentioned in prior articles and also in seminar presentations when discussing periods of unusually high fishing pressure. All along the coast we find fishing tournaments being held at least twenty or more weekends. This is just shy of half the year, which I feel is too many. While many are small affairs, there are major events that attract hundreds of boats. Some are two-day events and Texas’ largest tournament, the CCA STAR, runs from Memorial Day to Labor Day. The revenue these events generate is substantial and important to local communities, but think of the pressure they put on the fishery and also the fishermen.

I am not opposed to fishing tournaments. I love competition and believe tournament fishing can actually be a healthy activity. I support tournaments with live weigh-ins, that enforce rules equally and fairly, and conduct polygraphs. Learning to deal with highly-pressured fishing situations, both mentally and strategically, can make a difference in your ability to maintain a positive attitude and produce an enjoyable experience on the water rather than succumbing to frustration and anger. We need to concentrate on the wonderful and positive. Life is too short to worry over something that in the grand scheme is not worth the spike in blood pressure.

Over many years of having to guide on weekends, I became aware of what I call mini-migrations – fish moving temporarily to areas of reduced boat traffic and fishing pressure. My style of fishing, wading with artificial lures, allows a quieter approach into areas that are holding fish. I have coached (preached might be a better term), that we must enter the areas we intend to fish as quietly as possible. Some fishermen are clumsy and just down right noisy as they stomp through the water. Some step forward aggressively with every cast attempting to launch their baits farther. But what they are really doing is alerting the fish of their approach…and the fish react negatively. One of my biggest pet peeves is slapping the lure on the water to rid it of grass. It’s a bad habit and bad habits can be hard to break.

A great example is attempting to sight-cast a huge trout in the Boat Hole and your lure fouls with floating grass. As the fish comes into range you notice the grass and instinctively slap the water to get the grass off. The fish spooks, the opportunity is lost, and you are disappointed. Evidently they are deaf to our voices, though. If this were not true I would have never made it as a fishing guide because I talk non-stop. But just slap the water one time…

The pattern I want to discuss probably took ten years for me to begin to understand to the degree that I could depend on it. Fishing pressure forty years ago was nothing like today. I fished every day I could back then and weekends were our busiest times. I began to notice in the summer months that the outer points of the small passes along Traylor Island seemed to hold fish better on Saturday and Sunday than weekdays. I also noticed that midday to afternoon hours were better than early morning. I soon began making plans to fish accordingly and that’s when the pattern became clearer.

I always believed that I needed to know lots of areas holding fish for any given time of the year, so I started searching for other areas in surrounding bay systems similar to those along Traylor Island. Research takes years, so over several more years I started to see these patterns develop in other areas as well. One Saturday morning on the outside of Traylor Island I was forced to fish the northern point at Turtle Bayou early rather than late, due to the clients needing to be off the water to spend time with the wives and kids.

We arrived just before sunrise and found plenty of bait and some action right off. As the day progressed boat traffic started moving in and out of the small inlet. I was amazed that fellow anglers would attempt to motor virtually right across the line we were wading and some of the fish we were already catching.

I was never the confrontational type, 5’7” promotes this attitude, but I was a little put out at the lack of respect. Even back then it was mainly the professionals doing the majority of the disrespecting. Every time a boat approached I would tell my guys to keep their rod low when fighting a fish. The last thing I wanted was for them to stop in the middle of our catching. That’s when it dawned on me – the light bulb thing – the boat traffic was literally pushing the fish to us. I then realized that we were standing on the underwater point and casting to its outside edge. We backed up a few yards to allow the fish more room to pull up and stage.

The next hour revealed one of my most favorite high-pressure weekend patterns, which incidentally has proven effective over the past thirty years – from Louisiana’s marshes all the way down to Port Mansfield. I have used it to make lots of anglers happy who are limited to fishing weekends and holidays, as well as won major redfish and trout tournaments throughout my career.

I had one of the best trout tournament anglers in Texas tell me last year that during a recent event he had a boat run between him and the shoreline he was working. Before frustration set in he thought about a conversation that we’d had. I had stated that you have to overlook frustration and trust that the increased pressure could possibly push fish to you versus spook them away. On the very next cast he caught a fish that helped him win the event. For me, that was one of the best compliments I could ever hope to receive. Over the years I have tweaked the pattern nearly to a science, one that I reprove to myself time and time again, and try to teach others so that no day on the water ever turns into the day that sours you on fishing.

Fast forward to May 2020, Memorial Day weekend. The COVID-19 pandemic is showing signs of flattening. The economy is not in the best shape but Texas is leading the way in getting back to work and re-opening businesses. Our area boat launches were looking like July 4 when the Fourth falls on Friday. The shorelines of San Jose and Traylor islands looked like on-the-water boat shows. Some wading, some anchored or drifting, many just running around looking for an area to pull in and fish.

The wind was blowing 15 to 20 with higher gusts. The morning was a struggle with a fish here and there but no real pattern to the bite. Around 11:00 we decided to put a newer version of the fishing pressure pattern to yet another test. I refer to this as the Quiet Zone pattern. This pattern works extremely well when wading and I use it a ton in the Port Mansfield area.

I have waders scatter out about 20 to 30 yard apart. My attempt is NOT TO BLOCK the area, but to establish running, drifting and anchoring lanes on the perimeter of our position. By the way, I am not a fan of people dropping off anglers hundreds of yards apart with the intent to block off large areas.

No one owns any of the water and I have never caught a fish with my name on it. Nor have I seen my name on any map designating fishing areas. Okay, off the soap box, although it does feel good up there every once in a while.

So, we pull into to a flat where strong winds actually promote better conditions for catching due to normally air-clear water. Eight boats are in the flat but all out in front of the area I prefer to wade. We set up about 150 yards east of the target area and “socially” distance ourselves about 20 yards apart. Slow and easy boys, let the surrounding traffic push fish to our area. Two hours passed and that wade ended with a dozen or more slot reds and eight or nine solid trout. Another day of proving the pattern was entered into the books.

It’s these types of things that keep me inspired and make me want to continue learning. With that said and me being in the middle of putting these words together, I decided to take Renee and my daughter-in-law Brooke fishing on Saturday, but not early. I wanted to let the extreme fishing pressure of this weekend settle fish before we left the dock.

Around 4:00 PM we drop the boat in the water at Cove Harbor. Serious anglers asked if I had lost my mind and I quietly agreed that maybe I had. Winds were 20 to 25 out of the SE and boats literally everywhere, so a different flat was chosen but with the same general factors in play – boats left and right and down in front.

Easy ladies, just spread out and wade slowly forward. First boat runs the outer perimeter and a few minutes later Brooke has a trout on. Then Renee sticks a 27-inch red and Brooke gets another trout. Two hours later, limits of solid slot reds and four or five nice trout, all while boats drift and motor around our perimeter. A perimeter we created, a quiet zone where the fish became comfortable and went about foraging for food.

I hope this article finds you well, getting back to work, and a bit more confident in your ability to compete with fishing pressure this summer. My patterns work extremely well for me because I believe in them. Mindset is a huge player in this game and the best way to build a positive mindset is by getting out there and practicing. Practice might not make perfect but it certainly makes better!