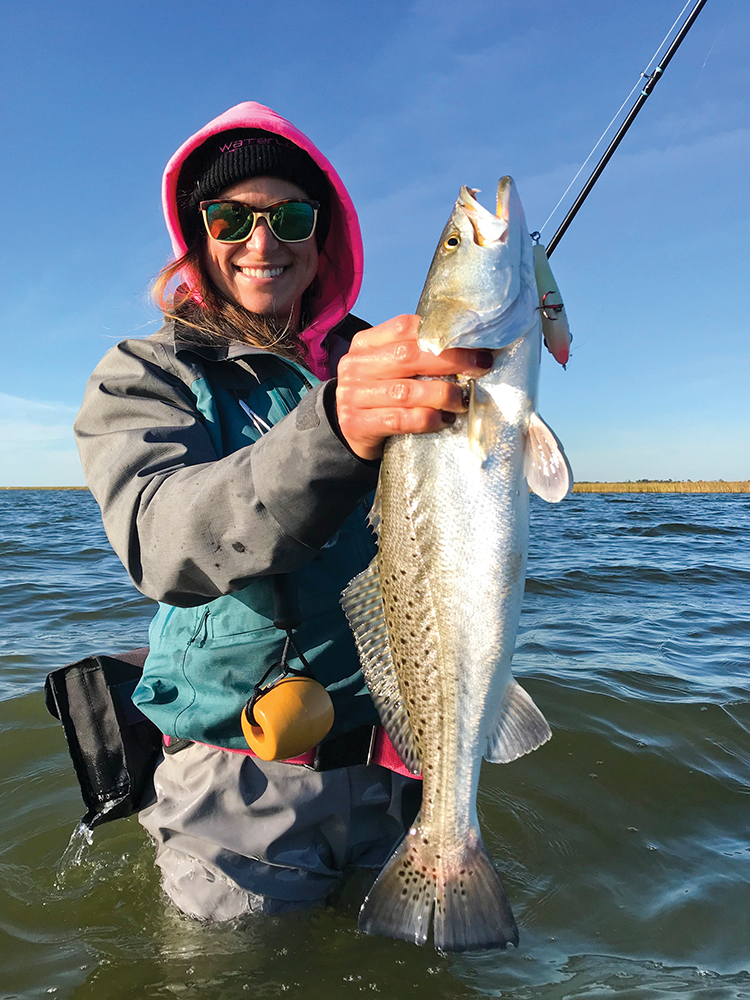 Winter fishing is in full swing and we have seen some gorgeous weather patterns the past several weeks. Pre-front and post-front fishing have both been pretty consistent for us. With colder than normal air and water temperatures, bay waters have reached clarity levels that I can recall only a few times in my career, this early in the winter season. So clear that it has become necessary to watch the Power Pole very closely at some stops to avoid stepping off the boat into water deep enough to fill my waders. Couple the clarity with higher than normal tides of late and you get my drift.

In this issue I will again stress the importance of monitoring surface water temperatures throughout the day. I have believed in this for many years and it is now easier than ever with the present generation of GPS/Depth Finders. Forty years ago I used a thermometer my dad gave me from the biology lab at school – taped a string to it and put it over the side as we drifted Estes Flats. Not as handy as we have today, but it worked.

A few days ago, after four days of sub-50° air temps, we were marking water temps in the low-50s in Estes and the southern part of Aransas Bay. As we moved south toward the Corpus Christi Ship Channel we observed a gradual increase as the deeper and warmer waters in the channel transferred warmth to nearby shorelines and spoils. We settled on a patch of 57° water where a few mullet were active, pelicans were diving, and a lone osprey was lurking overhead. We caught five trout over twenty-five inches. Numerous reds were also caught, which reinforced my long-held belief that monitoring the water temps led us to the right spot. It also established a pattern for the next several days. If you do not have the ability to monitor surface water temperature, you need to invest in it as soon as you can. It’s part of Fishing Smart 101.

Had several people contact me after my podcast with Chris Bush of Speckled Truth, asking what conditions I look for when targeting winter trout. While I’m a big believer in the solunar tables, these forecasts do not allow for local weather conditions – cold fronts, warming trends, unseasonably high or low tides, wind directions and velocities, atmospheric pressure, local fishing pressure, etc. In addition to the solunar data, all of these must be considered when formulating fishing plans.

Always take into consideration that I am extremely confident in the patterns I have observed to be productive in the areas I fish most often in winter. One of  the reasons for the wintertime success Jay Ray and I have enjoyed at Port Mansfield, besides the help received from so many locals, is our knowledge of shallow water fisheries. What looks good to me here in Rockport, often looks equally inviting in Port Mansfield, and more often than not it is.

Wind direction and velocity controls more days than any other condition. I prefer NE wind in the winter months because this is the prevailing wind direction of the season. We also have short warming trends between fronts when the wind turns ESE that definitely influence the bite. I prefer water temperatures below 60° but not much below 52°. I have caught some tremendous fish in 47- to 50-degree water over my career. My records however also indicate that by day’s end a warming trend was in play that increased water temp in the shallows by as much as 5- to 7-degrees. During these afternoon warmups we observed both baitfish and trout becoming more active, which no doubt contributed to the success.

I like overcast skies. Foggy, humid mornings, when we have trouble keeping our glasses clean of condensation can be awesome. Fog typically forms in calm conditions, which leads to  greater water clarity. Fog masks sunlight, which encourages fish to feed in clear water. When the fog burns off and the sun pops out you almost always notice a significant decline in the bite.

I like low atmospheric pressure versus a high barometer. How many times have you noticed floating spider webs collecting on your rods on a beautiful calm, clear day in late-fall and winter? Parachute spiders are the culprits and they need low humidity to pull off this mode of transportation. When we see this, we’re probably done and my records reflect this as well. I never stop trying but it definitely turns the fish off. Mickey Eastman taught me about parachute spiders many years ago while pre-fishing a Trout Masters Tournament. Mickey, Blaine Friermood and James Plaag really helped me a lot in those days.

I like medium tides versus the lowest of winter lows and the highest of highs. I can’t put it into inches but I know when I step out by where it hits me on my waders. My Simms waders have a permanent salt ring at this level, just so you know.

I like a modest wind-driven current versus strong tidal currents typically found near major inlets. I believe the effort required for fish to position and feed in strong currents during winter burns more energy than they can gain from the food they consume. As always, zero science in play here but the pattern works for me.

In my home bay system, I love fishing water that is moving across and along the edges of mid-bay reefs. My records indicate that when water temperatures drop to 52° and below, the productivity of this pattern goes right out the window. I keep detailed records daily, continuously testing and retesting my theories. Just last week, in an area where prior to a front the water was running 60°, we caught forty solid trout. After the front, with 52° water and similar water movement, we caught only two. Three days later, with 56° water, we were back up to thirty-plus fish off the same reef.

I prefer areas affected by freshwater runoff in winter when rainfall has been generally scarce. Such areas can be further categorized as backwater marsh or back lakes where fresh runoff from a land mass is funneled and then pulled toward the main bay during tide movements. The mixing of fresh with salt can create situations that trout will use to their advantage.

Fishing tournament scouting in weeks prior to a major event, and weekend fishing pressure in general, creates the need for me to work outside my normal box and that creates an opportunity for me to continue to learn. I loved the tournaments when I fished them regularly, and totally understand that weekends are the only time many anglers can get on the water. A guy asked me the other day why I still fish weekends. I told him that it keeps me focused as I react to all the conditions and situations we face in a highly pressured fishery. I strive to see the good in things rather than the negative.

Can fishing pressure cause fish to relocate? Certainly! But they do not vanish into thin air. They move, so we have to hunt for them with the instincts and knowledge we have gained through experience. And yes, you can get them to bite if you believe you can.

So, in reality, very few days come my way when the prevailing conditions all fall into the neat columns of my preferred conditions checklist. What I have learned to do is capitalize on the moments when everything aligns the way I like it, and then work with what I have at hand on the days that give me less. We will never be able to control the weather or fishing pressure. Rather than fretting over the things you cannot control, concentrate instead on the things that you can. No matter the day’s conditions, strive to learn something every day.

My dad told me before he passed away that there was only one thing wrong with the old saying; “I’d rather be lucky than good.” Luck eventually runs out. Working hard to be good at what you like to do will always win in the long run.