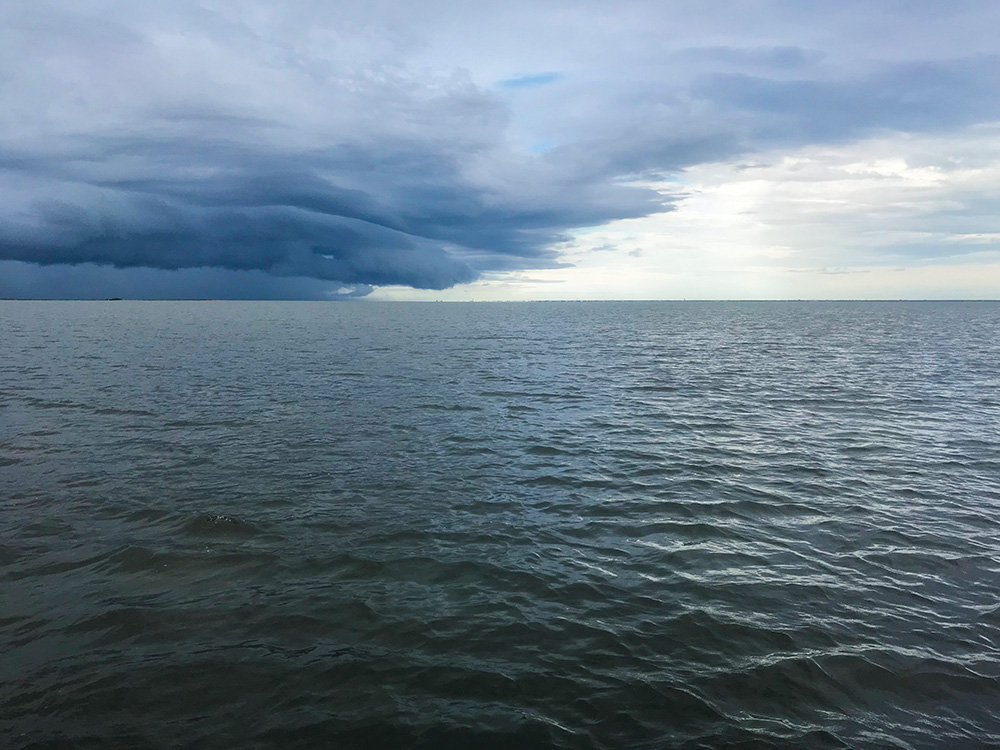 Potentially dangerous front approaching! Fish through it only if you have safe run home.

I want to thank everyone that reads my articles and takes time to email or call with comments. I do not consider myself much of a writer but I am pretty confident in my ability to get my points across as a speaker and teacher. My writing is really just field notes of what I see on the water each day. I don’t use big words; I don’t even know many big words. But I believe our editor understands that I write the way I speak and accepts this. Simple works for me and allows me to focus on the where, when, why and how of fishing.

Water temperatures dropped nearly 15° with our first real front in mid-October, along with more rain. The much cooler weather pattern definitely got us into our Simms waders and jackets. I’ve tried them all and there is nothing better than Simms.

Unseasonably cool temperatures and NE wind has persisted for ten days. The unusually high tides receded a bit but we still need to lose more water to help with the mixing of fresh water with salt water in the Aransas Bay Complex. Fishing is still good most days despite the higher tides and abundance of baitfish. Colder air temperatures will lead to colder water temperatures and this will result in a diminishing bait supply. The decreasing availability of bait will lead to increased search and aggressive feeding from our resident trout and red fish.

I call this a feeding-up period and the prelude to what I call Corky season. For the record, I do not consider myself an expert on Corky fishing. I use them about 100 days out of the year when the conditions feel right to me. I cannot always tell you why I will switch from time to time during the day in the winter months from a Custom Corky to Bass Assassins, MirrOlure Lil John’s, Provokers, to a Soft Dine and now the New Double D lures, but I do. I just have to “feel it” in order to have confidence that I have the right lure for the weather and water conditions of the day.

The mere mention of the Corky gets the most serious of bay anglers excited. It’s to trout fisherman what the rut means to South Texas deer hunters. In my younger years I honestly did not throw the Corky very much. I was convinced that I could catch just as many big trout on soft plastic. Truth is, I caught lots of big trout on soft plastic but, then again, that was about all I was chunking at the time.

What makes a 10-pound trout so worthy is the basic scarcity of them – the same as a 170-plus low fence whitetail. There just aren’t many of them roaming around and the ones that are have become well educated. For me, a trophy is any fish over 8.5 pounds that measures 30-plus. I have always felt that weight overshadows length but that’s just me. Truth be told, a 30-plus trout is hard to find and the age of that fish definitely supports its trophy status.

This time of year offers the best opportunity and success ratio if it is a trophy fish you are interested in chasing. The science shows that a trout must live an unusually long time to attain the 30-plus category. Simply put, we can’t have mature bucks if we shoot every 4-1/2 year-old ten point. Please release these magnificent fish and allow their genetics to live on and maybe even give someone else the chance at catching her.

So, you want to fish with a Corky? The first thing to understand is what kicks off the much-anticipated “Corky season.” I believe it could be the relative scarcity of smaller baitfish that triggers this lure’s appeal to trout and reds. Reds can certainly be Corky wreckers but where they are found can also be holding some really big trout. Never be hasty to change lures or leave an area simply because the reds are demolishing your precious Corkys!

As water temps steadily decline during winter, smaller bait of all species migrate to the Gulf or to deeper waters of our bays. This leaves mostly larger mullet in the primary shallow feeding zones. Trout can and will definitely eat larger mullet but would prefer smaller offerings if available, and this where a 3- to 4-inch shad imitation really comes into play. Through observation, I believe that our bigger trout stay within the ranks of larger mullet for camouflage, waiting on one they can swallow more easily to make a mistake.

Working the Corky is more than just throwing it out there and reeling it back in, and it’s not always about a mind-numbingly slow presentation. I learned this from Cliff Webb, definitely one of the very best Corky-fishers in the business. Cliff and I made some incredible memories of double-digit fish together but I will not go into detail here.

My first Corky Fat Boy lesson from Cliff came in my home waters in the middle of February. Ryan and Jay Ray and I had pre-fished this area and located some heavy 27- to 28-inch fish. Problem was they were holding in soft mud potholes that were surrounded by heavy clumps of live oysters. Large mullet were schooled over the soft mud potholes between clumps of oysters. We caught them but had trouble with landing due to the tall shell clumps as the fish exited the potholes on the hookset.

When I took Cliff to the area he immediately told me that we could catch these fish on Corkys better than tails. Well, he said he could and he did.

It was crazy how aggressively he worked the bait over the shallow shell and then paused the lure briefly to flutter down into the muddy potholes, only to rip it out of the pothole and move to the next. He literally caught a half-dozen or more six-plus pounders before I had a bite on my trusted Bass Assassin.

I tied on a Fat Boy and began trying to imitate Cliff’s presentation but I wasn’t getting the speed or action right. Cliff eased over and looked at my rod and told me it was my rod not me, and that he would bring me the right rod for tomorrow’s trip. I had a hard time believing the problem was my rod.

Cliff showed up the next morning with a 6’6” All Star Titanium Medium-Light action. With a little instruction on the finer points of the aggressive presentation without moving the lure too far forward, followed by short pauses in the cadence, I was ready to go. Within a few casts I had a six-pounder eat the Corky on the pause. To say I was hooked was an understatement.

I still employ the same basic presentation on my Corkys. I seldom work the bait as slowly as some believe necessary. The old saying that, “If you think you’re working it slow enough, slow down even more,“ does not work well for me except in very cold and deep water where we must allow it to sink to the depths at which the fish are holding and feeding. I get after it aggressively in shallow water and it seems to work for me.

For the record; I like to put a slight bend in both the head and tail of my Fat Boys most of the time. This is done by pressing it into my cupped palm with just enough pressure to create a gentle bend.

I think the rod action and power we choose play major roles in lure action and also the ability to control the vicious headshakes of large trout. Jay Ray and I prefer the 6’6” Medium Light action with moderate power and rodmaker Steve Henriksen’s rods are outstanding. Jimmy Burns at Waterloo makes a great one as well.

Mud is not always the trout magnet some believe it to be. The mud thing is more about the availability of zooplankton and tiny copepods that mullet feed on during winter and you probably already know my beliefs on locating a reliable forage supply to find trout.

Yes, we catch lots of wintertime trout over mud and mud can be warmer on sunny days. But it can also be quite cold under heavy cloud cover. The point is that trout will always follow the mullet and the mullet are always going to stage most reliably in areas that provide the best food source.

To prove the point further, I have caught plenty of big trout on hard sand in sub-50° water temperatures, as long as the air temperatures were rising above the water temperature. McBride, Miss Tricia, and I have had many a late-night conversation about the mud thing. Throw in J.D. Whitley’s fifty years of big trout experience and someone needs to be taking notes. That someone is me!

The Custom Corky Fat Boy is my favorite of the famous Corky family because of its shad-like shape. Shad and other similarly-shaped finfish are a staple food for trout in every bay system. And as I stated earlier, the Fat Boy represents a familiar forage, especially when presented amongst outsized mullet that trout would be less than anxious to attempt to eat. This might help explain why they go after it so aggressively.

While off-the-shelf Fat Boys and other Corkys will definitely catch fish, my favorites by far are the Custom Corky Fat Boys and Custom Soft-Dines created by Lowell and Dee-Dee Odom. I love the gold hologram series and the custom color patterns that have been developed for clear water as well as the dirty stuff. The clear-bodied baits with the gold or silver holograms allow me to have lures suited to whatever the conditions might be. Gold for overcast and dirty; silver for clear skies and clear water is my general rule. Honestly, the gold holograms are good in all conditions. On days following fronts with high atmospheric pressure, the smaller Soft-Dines in the same custom colors seem to really shine.

Worried about the bigger redfish tearing up your Corkys and Soft-Dines while waiting on that trophy trout? Enter the Texas Customs New Double D by MirrOlure in all the same custom colors as the Custom Corkys and Soft Dines. MirrOlure means quality and the Double Ds are double tough, I promise you. Check them out at Waterloo Rods Pro Shop in Victoria and Johnny’s Sport Shop at Eagle Lake. Tackle Town in Rockport, Roy’s Bait and Tackle in Corpus Christi, and Marburger’s in Seabrook will have them in stock very soon.

Pumped for Corky season? I am, and I hope to see you around the docks very soon!