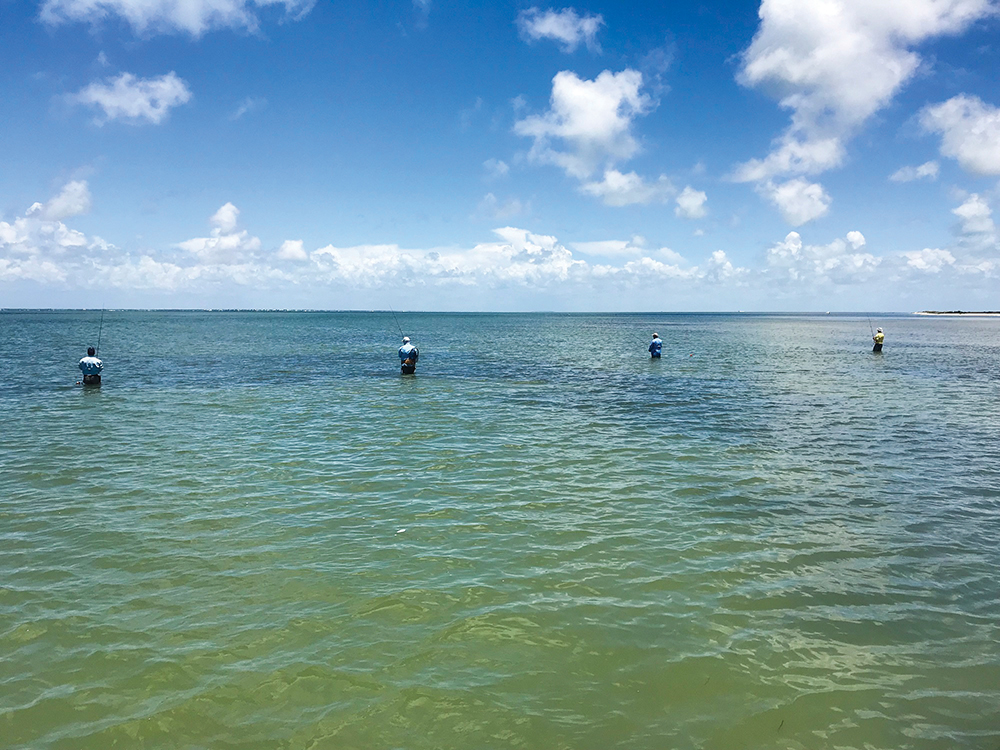 Lined up and grinding on deeper drop-off.

We are entering a transitional month for most of the middle-coast bay systems. Days grow shorter as angler excitement rises in anticipation of cooler fall weather and water temperatures. The gradual change in weather also produces changes in the behavior of gamefish. I am of the opinion that the fall of 2018 will deliver some of the best fishing we have experienced in my home waters in many years.

Cedar Bayou has closed again but there is already talk of another dredge project. Our resident trout and redfish populations are strong and should be more than enough to get us through until this occurs. The bayou contributes to water circulation in the northern-most sections of the Aransas complex, which includes Mesquite, San Antonio, Copano, and St. Charles bays. I doubt that there would be many who would dispute the positive effects the opening of Cedar Bayou in September 2014 provided. When the time comes to donate funds, remember how much you have enjoyed the good fishing in Rockport and help us reopen the pass. This should be especially true of all the guides and their clients that have enjoyed the bounty the bayou gave us.

Transitional periods in fisheries are common along the entire Gulf coast. These occur on varying schedules depending on prevailing local weather patterns within any given region. Here in Rockport we saw a decline in feeding during the latter weeks of August, brought on by low tides and elevated water temperatures. Fish retreated to deeper water and spent more time in non-feeding mode.

Deep is relative to the majority of the surrounding waters. In some areas 3-feet might be considered deep and in others it might be 5 or 6-feet. No matter the depth, once this pattern becomes established I focus on deeper areas with basically the same bottom structure the fish were using before the pattern emerged.

My daily routine includes a constant vigil for areas that hold abundant bait on a consistent basis. One has to believe that fish are genetically disposed to stage as near a reliable food source as possible. For years I have declared my confidence in fishing areas of shoreline or flats that I consider nighttime feeding zones. These are areas with quick deepwater access as well as proximity to marsh drains that connect backwater lakes to the bays.

Areas such as this are great for finding large numbers of fish that are in a state of transition. Summertime boat traffic and weekend boat traffic can both put fish in this pattern temporarily throughout the year but I definitely use this strategy during a major seasonal transition. I firmly believe that if we can put ourselves in areas where there are higher numbers of fish concentrated by conditions, our chances are increased.

Just the other day we eased up on a shallow sand bar with scattered patches of seagrass. Water temperature was 87° at 11:00 AM in this back bay area with no tidal movement and almost no wind. If I also mentioned that the very slight wind we were receiving was coming from the southwest, you probably would not believe what took place over the next two hours. Incidentally, what I’m about to relate is definitely one of my many transitional favorites.

Since it was a Friday, boat traffic was not too bad, yet. There was bait present, both shallow and out along the deeper edges of the bar. It was much too calm to see slicking if it was occurring as we set the Power Pole. I instructed my group to slowly spread out and push forward toward the deeper drop-off. “One bite stops everyone,” I told them. Something I say many times throughout my day.

Only a few yards into the wade I had a fish take the bait very gingerly and then spit it. Yes, you can tell what’s happening at the end of the line if you have the right setup. I stopped the group. Immediately we could smell the distinct aroma of watermelon – some call it freshly-mowed grass.

Coaching begins. “Let the lure fall to the bottom, but on the uptake, twitch the rod with some aggression. Several quick turns on the handle and then dead-stick the lure, letting it fall back to the bottom – almost. Almost is critical. It’s a timing thing each angler must customize to his or her own lure cadence.

Once a few fish had been hooked and landed the aggression of the other residents was noticeably increased. For almost two hours we caught solid trout to nearly 23-inches, multiple hookups were common, producing a morning of fishing that will be remembered by all for a long while.

On the very next day, in a totally different bay system but similar setup, we had an even better morning fishing a deeper drop-off that bordered a nighttime feeding zone. This day resulted in thirteen fish over 21-inches and one that pushed the tape to almost 29-inches. Again, once a fish or two was hooked, the brakes went on and shortly the intensity increased, resulting in a twenty-plus fish wade for my two anglers. Situations like this present themselves more times than we might like to think. It’s the manner in which we think, once the situation is encountered, that turns a normally tough transition pattern day into an unbelievable one.

I am a huge soft-plastic fan when it comes to overcoming a tough bite. I’ll never be without a 5” Bass Assassin, a MirrOlure Lil John XL, or the 5” Provoker. This said, we need to also consider that sometimes during tough bites the reaction-type lures such as topwaters, slow sinking/suspending lures, or swimming hardbaits that suspend and then rise to the surface can draw strikes from fish that do not want to eat our soft offerings.

Cliff Webb in Baffin and Mike McBride and Miss Tricia down in Port Mansfield might be the best at creating bites when fish do not want to feed with noisy surface or suspending lures. I am getting much better at returning to my old roots with the hard suspending baits. For years the 52M MirrOlure was my go-to, as were gold and silver spoons with yellow bucktails.

Today I find myself using the MirrOlure brand more and more, due to a very wide variety of lure styles and a multitude of color patterns. I very well might be morphing into an angler who wants to catch them the way I want to catch them and not necessarily the way the fish want to be caught. That’s the real challenge, right? Catching them when they don’t want to be caught?

The new Texas Custom’s Double D series by MirrOlure are extremely versatile. It swims about fourteen inches below the surface while retrieved, suspends briefly when stopped, and then rises slowly to the surface. I find I can really do a lot of things with this lure that draws reaction strikes from fish that are not really in the mood to eat. It’s another good card to have in your hand when you need it.

Paying close attention to major and minor solunar feeding periods is always wise and I feel it is an even better tool during transition periods. Apex predators feed in small windows most of the time and never are we fishing smaller windows than during transition months. It only stands to reason that the smart fisherman wants to be in the right place at the right time, and then hopes the skills he or she has developed will be enough to turn the tables in their favor.

As is always the case with me and my fishing beliefs, my way is my way but not the only way. It might not work well for you but if you find yourself failing to produce to your satisfaction, try mine. I’d certainly try yours.

I just returned from ten days in Alaska. What a gorgeous place and definitely still very wild. I will definitely return to this great state and spend more time fishing. Pictures to follow in next month’s issue.