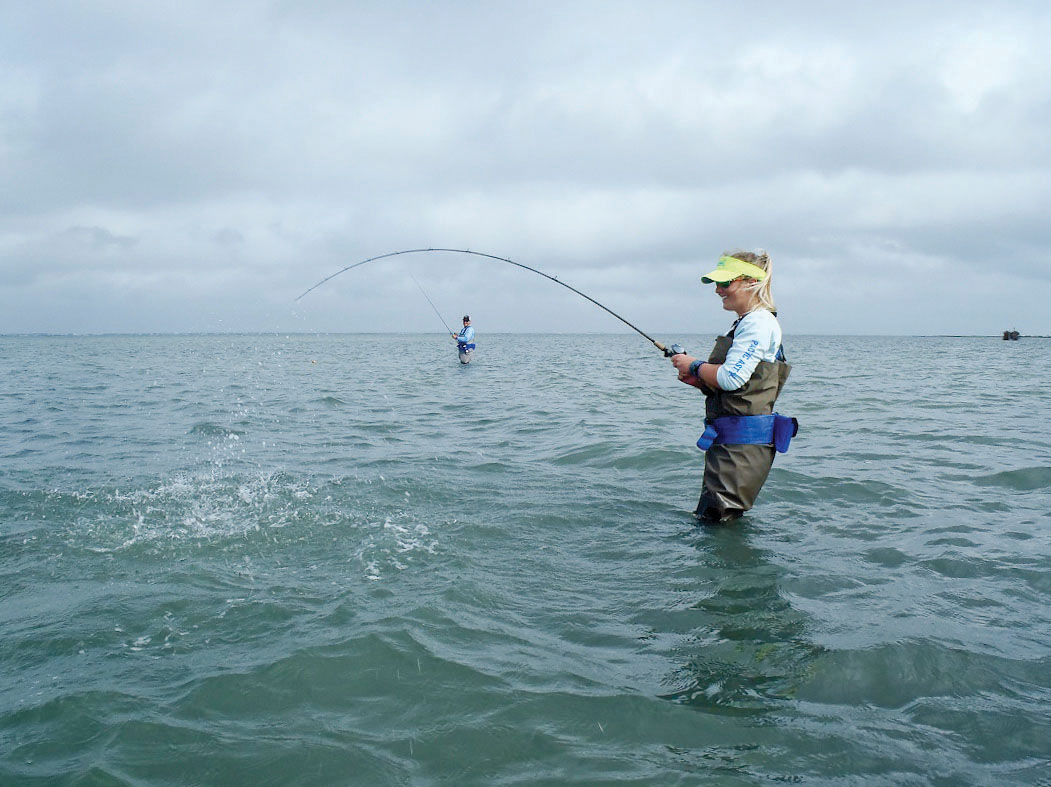 Erin Donaldson with solid trout hooked up as Dad watches. The girl has got it!

Here’s something different for you. I want to talk about FISHING SLOW…but doing it FAST. Kind of confusing…right? Let me explain a few things before I confuse you even more.

First off: Fishing slow has nothing to do with the speed we turn the reel handle or twitch the lure. Neither does it refer to how fast we walk through the water or present a lure. Fishing slow - the way I use the term - means deliberately and methodically casting repeatedly to every facet of every piece of structure we expect fish to be using. The speed of our presentations while doing this matches the mood and feeding attitude the fish exhibit.

Next: In the context of this discussion, “doing it fast” means we do not dally about. We determine the size, shape, and depth of the most productive structure and we place ourselves purposefully within casting range of it. When none are within casting distance we move to the next. Professional bass anglers have absolutely mastered this technique. Kevin VanDam is one of the best – if that tells you anything.

So, right now, we are trying to catch trout that are spawning. And spawning structure, though sometimes similar, is not necessarily the same as “feeding” structure that we target in other seasons – clump shell, ridges, drops, etc. But, no matter the type of structure or season, we must be diligent to place ourselves in the right places at the right times to entice fish to bite – solunar majors and minors.

What comprises springtime trout spawning structure? Perhaps the best and easiest to find would be the shallow, intermittent grass beds along sandy shorelines and those that lie further offshore in the series of guts that run generally parallel to sandy shorelines and spoil banks.

Some additional tips for locating and catching spawning trout – the larger fish seem to prefer shallower environs, often the smaller and scattered pieces that occur knee-deep – while the greater numbers (usually smaller fish but not a fast rule) will be found in the guts that range from knee- to- thigh and waist-deep.

Another very interesting fact is that spawning trout are not as quick to vacate a preferred spawning structure as they will a feeding structure. In other words, they are less likely to flee the area entirely when pressed by boat traffic. The bite might slow down but they are not likely to just up and leave.

You will not find this stuff in textbooks, and I have no scientific evidence to support it, but I have a lifetime of experience…

Now that we have identified how to fish slow but fast, and where to employ the tactic, let’s look at how not to do it.

I get wannabe track stars all the time that jump out of the boat and take off to parts unknown. They are wading fast and fishing faster, beating the water to a froth with their lures. More often than not this lends to blasting past potential targets and potential catching opportunities. It’s OK to move forward steadily, as long as you are targeting the individual structures as they occur in your path – with a presentation rhythm and retrieve that matches the feeding attitude of the fish.

I took a break from writing this piece and took Renee fishing this afternoon, hoping to try out this slow but fast strategy with her.

We couldn’t leave the dock until 12:30 PM on Saturday, a few weeks prior to Babes on the Bay, and the Texas Saltwater Legends Tournament was underway down at Aransas Pass.

Crowded was an understatement. I had to park on the street at Cove Harbor because the parking lot was jammed. We missed the major between 9:00 and 11:00 AM but had a minor coming between 2:30 and 4:00.

I chose a section of Traylor Island that I like on SE wind. The water was almost air-clear, so clear that Renee remarked about it. I know from history that this shoreline holds good numbers of big spawning trout this time of year. Plus, it has been giving up lots 3- to 4-pounders all spring.

The notoriety of the area promotes traffic and traffic is believed to drive fish off the shoreline. BUT NOT SPAWNING FISH! I love testing my theories in areas where catching can be tough.

I instructed Renee to take the lead and wade the line I had her set up on. “Don’t let the wave set you forward as you work to the north,” I instructed. I have found that by switching from spouse to coach we have fewer flare ups, if you know what I mean.

Renee is athletic and competitive, so working to get it right is not a problem. “Cast to individual grass beds on the edges of the guts,” I told her. “Fish deliberately, hitting as many targets as you can. Move forward steadily until you get a bite.”

Typically in clear water, if fish are feeding actively, the bite comes almost immediately when the lure hits the water. No bite? Slow down and hit each piece of structure with several more casts. Move on and repeat.

Receiving bites refines your strategy for working forward. Was it in the gut; entering or exiting the gut; over the grass or at the edge; downwind or upwind? All of these tell you how to direct your next casts.

About 20 minutes into it, Renee stuck a solid 22-incher off the edge of grass in the middle of a gut. I immediately threw into the same spot and pulled out another. She really got a kick out of me seeing the opportunity and calling the shot. Hey, it’s what we do.

I instructed her to skip the guts without grass and hit ones with it. Ignoring sections of guts without grass helped us increase our pace. Pretty soon she was all over picking spots similar to where she caught her first one, and it was game-on. Never more than two per grass bed but all were 20-plus fish. Interesting – we watched two very large trout following ones she was reeling – likewise another pair of heavies sauntered past under a school of black drum. Awesome sight!

We fished until nearly 5:00 PM and I was impressed how her accuracy in hitting the structure became pinpoint. No doubt this played positively into the number of fish she caught. When I asked if she wanted to get on the beach and walk back, rather than wade, she was amazed at how far we had gone.

So, the next time you find yourself on a long stretch of shoreline where bottom structure is more scattered than concentrated, and the water is air-clear, try fishing slow but fast. Who knows, you might turn a tough day into one like Renee and I enjoyed.

In closing, I would like to mention and recognize Totsy Belcher and his induction in the Texas Saltwater Legends Fishing Hall of Fame. I was asked to give a short speech and introduce Totsy and it ranks amongst the highest of honors. Totsy is the real Old Man and the Sea and has always been a legend to me.