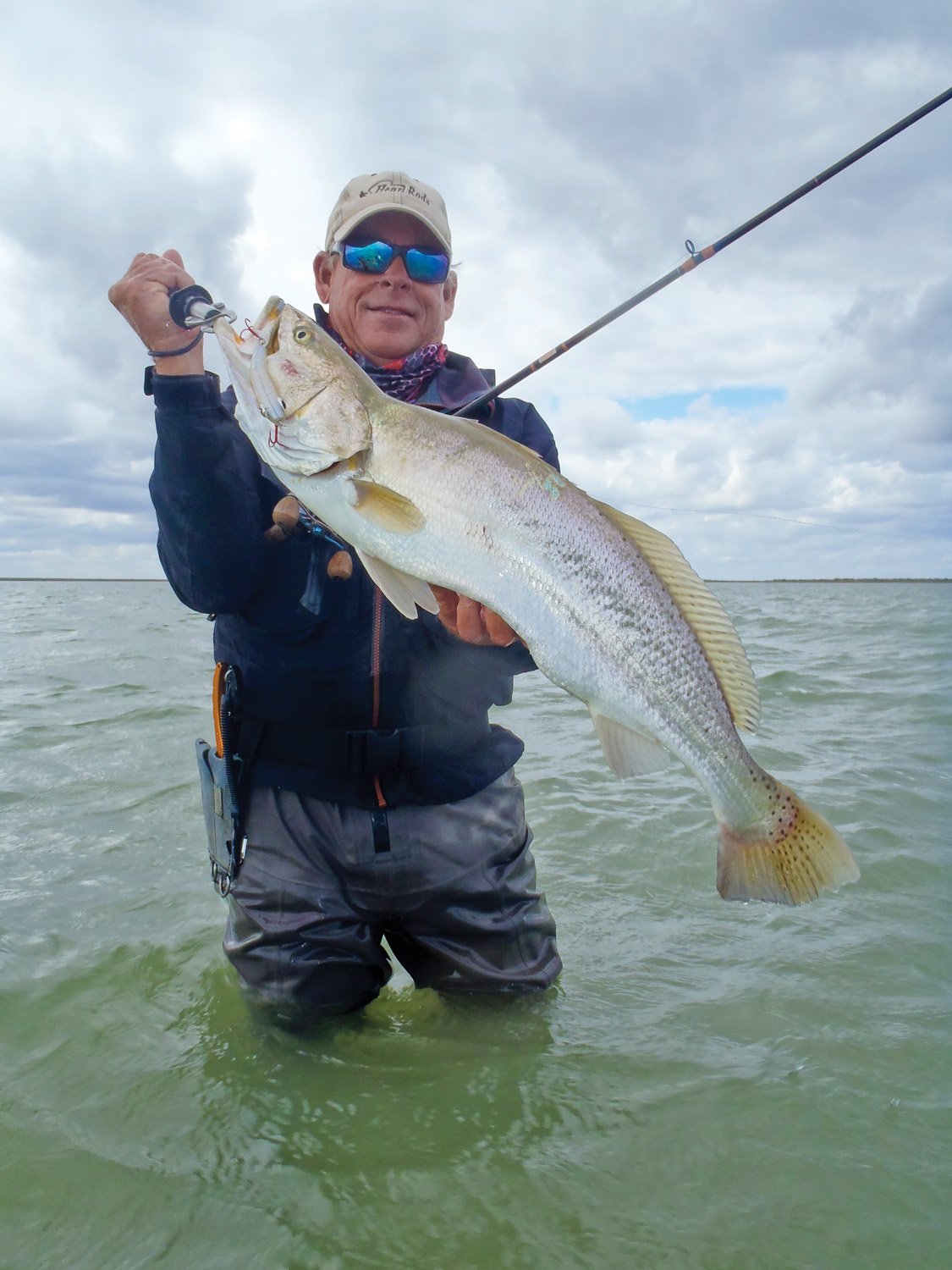 I have been asking for a colder winter the past several years and it seems I have my wish. Scary cold during a few of the fronts but it seems that our fishery did not suffer too terribly, save for a couple of Port O’Connor’s back lakes. What happened there was sad, thankfully it was not more widespread.

Biologists say sustained water temperatures below 45⁰ can be the beginning of the end for many inshore species – especially trout. Drop the water temp to 38⁰ for any length of time and fish will die in staggering numbers. Daytime warming plays a huge role in the recovery of cold-stunned fish, cloud cover through the night helps prevent that warmth from radiating into the atmosphere. We can apply that same principle to our own fishing efforts.

I actually caught fish when the water temperature was running 43.5⁰ over the past several weeks, not many, but some here and there. I have noted over the years that water temps of 47⁰ and above is typically when I see the bite beginning to rebound. The warmer the surface temperature the better. And don’t for one second think that fish will not move shallow to gain such warmth, and feed when they are there.

I am never afraid to fish shallow as long as there is ample bait present, suitable bottom structure, and quick access to deeper water. I definitely believe that fish will move up shallow to warm and maybe eat something, and then return to the depths to ride out the cold as the shallow water loses its heat. Small windows of opportunity should be expected during periods of cold such as the harsh frontal passages we have experienced this winter.

Great anglers possess better than average skills in many aspects of the game. They have good lure presentation and cadence, and they are totally aware of all that is happening around them. They allow patterns to unfold and develop once in the proper zones. Most interpret weather patterns well and put themselves in the optimal place at the optimal time. They have tried and true hook-setting, fish fighting and fish landing skills that result in a higher percentage of larger fish being landed. It is the smallest of bad habits that cost you on the truly big fish. This is especially true when speaking in terms of trout 30-inches or better. I coached my boys from a very young age on developing good habits that allow them the chance to land the best fish once on the end of the line.

This said, a phenomenal angler possesses a cerebral aspect of the sport that places them above even the great. The BRAIN GAME is huge in fishing and never more needed than during times when fish become adversely affected by cold weather. In this article you should take note of the color of the trout I am holding in the photo – it shows very little color. My sons, Jay Ray and Ryan, noticed immediately, as did Lowell Odom.

“That fish has been in deep water, Dad”, was the text message I received from both boys almost simultaneously. Interestingly, I did not catch the fish is deep water. She came from what I have come to believe is a route fish use when traveling from deeper water to fast-warming shallow water in the winter months.

Brain game anglers have an unbelievable mental picture of how fish move, many without any real scientific education. Incidentally, I believe on-the-job training to still be one of the best way to truly learn.

Brain gamers are constantly developing strategies that involve locating routes of travel and the likely interception points along such routes that will bring them in close contact with fish during these periods. When fishing with exceptional anglers, who sometimes think aloud, I advise you listen more and talk less. I fish with many anglers that I consider phenomenal, and when doing so I am listening more than talking. Oh, I know that is hard to believe, but it is true.

Thinking anglers are not surprised when patterns develop as they have already mentally predicted them, and are therefore prepared to finish the game in grand fashion. Just think about some of the best fishing stories you have ever heard, I’ll bet those tales involve one of the best anglers you know. They do for me, anyway.

The thinking angler is seldom frustrated when proven and tested patterns fail. Fishing is an imperfect science, and that’s another undeniable truth.

I will go out on a limb and say that many people view fishing as a no-brainer sport. Just chunk it out there and reel it in – that’s all there is to it. This is fine if you’re happy with merely enjoying a day on the water, and maybe catching a fish or two. I have not reached that point. If I ever do, it will be because my attitude has changed, not for lack of knowledge, skill, or tools to get the job done.

J.D. Whitley, longtime guide in Port Mansfield, told me the other day that he sometimes does not make a single cast for long spells. Just watches and takes it all in. J.D. is 80-years-old and still a stud of a fisherman. He has earned the right to just sit back and enjoy the beauty of the day.

I have a fondness for old salts. They did it without much of anything. They were lacking in the sophisticated types of gear we have today but had a ton of grit, which is way better than all the best gear. J.D. Whitely is a true saltwater legend on the Lower Laguna.

A downright nasty stretch of weather began on Tuesday morning this past week. Monday was pre-frontal and, due to the intensity of the front approaching, the bite was really strong. Following the arrival of the front, daytime highs over several days ran in the mid-30s, dipping below freezing through the night. Tides were extremely low and water temperatures dropped to the low 40s. Short sessions were about all we could stand while wading in the frigid waters. Luckily, there were several afternoons with moonset minor feeding periods that allowed for good opportunities after daytime warming had occurred.

On the third day after the front, the wind diminished but heavy cloud cover and rain persisted. Very little daytime warming left the fish holding in deeper water. Several days prior to the front I had located an area along the shoreline where deep water access was close at hand, the bottom structure was ideal, and a ton of bait was present. I believed that even with the extreme low water temps, the deeper water would protect the bait and the predators. Scouting for such areas that could be productive after the front goes through is always a good idea.

On day four, in heavy fog and almost no wind, we stepped off the boat into 44.5⁰ water, adjacent to deeper water, and started our slow assault on the shoreline. Parallel shoreline guts with submerged grassbeds lay in front of us, though most were hard to detect with the poor visibility. Prior scouting and marking of the areas on my part allowed a high confidence level among the group.

I had great anglers with me, so no worries there. Bites from trout up to 5-pounds and some heavy redfish came pretty quickly. No words had to be spoken; all stopped in their tracks and strategically dissected the water in front of them. We landed close to twenty fish before the fog lifted and the wind went dead-calm – and the bite ceased. The bait moved back to the deeper water and, even though we caught a couple more trout, there is no doubt in my mind they too had left the area.

The thinking fisherman sticks to the area where the bait has been present and fish were caught or, you go searching for alternate areas that match up structurally with the area where you caught fish earlier in the day. We did just that but only caught redfish in those areas. My guess is that we would have caught trout in these areas had they been our first stop of the day.

This particular morning, though fog definitely threatened navigation, it also aided our angling effort in the near gin-clear shallow feeding zone. Savvy anglers save safe travel routes on their GPS when scouting, mark suitable bottom structures for the season, and always mark areas holding predictable and reliable bait concentrations.

The brain game is the real game.