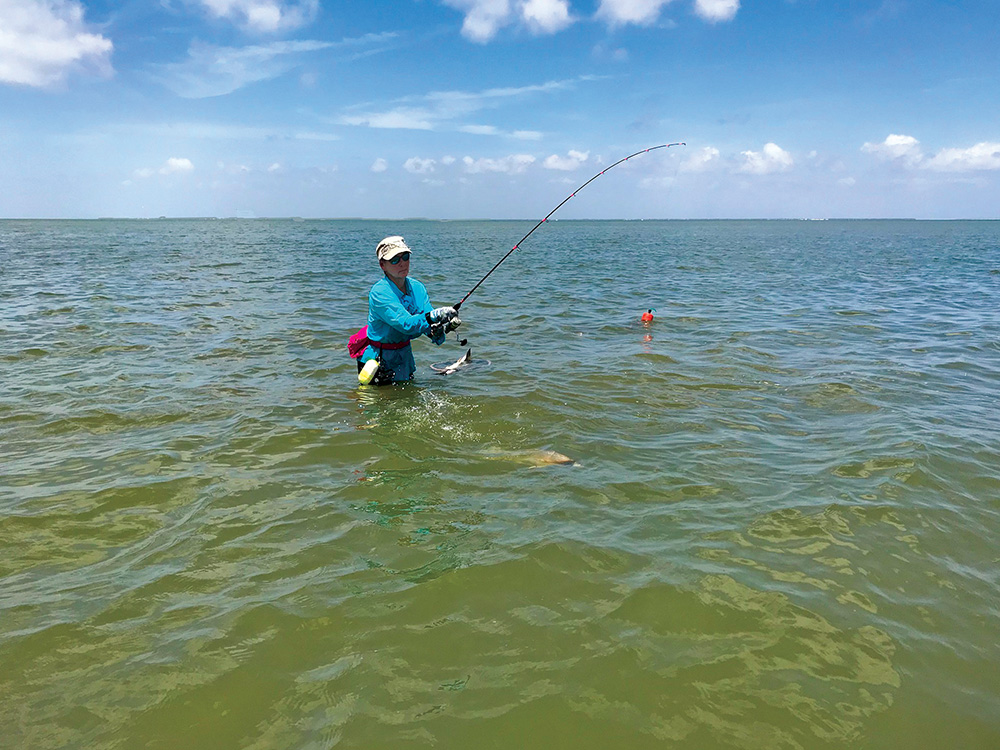 Chantal Piefer landing one of many fish on this day.

Angler’s on my boat frequently ask, “What is the single-most important characteristic that expert anglers have in common?” Great question!

For years I hesitated to give a specific answer, simply because while I could rattle off many attributes of great anglers, I was not able to put my finger on just one.

Since then I have come to believe that the most important characteristic that the absolute best anglers possess is imagination. They have the ability to imagine their success, capture that image, and then systematically apply it to whatever situations and conditions the day might present.

This might sound pretty cocky but I used to mentally rehearse the speech I would deliver after winning a fishing tournament. I was able to imagine myself, sometimes my team and I, winning the event and I believe it boosted the confidence it takes to fish smarter and more attentively throughout the day.

Today I see success for the day in my ability to imagine what the day will have to offer prior to its offering. I certainly use the all the tools available to predict weather patterns and such, and my past experiences in seasonal patterns, but each sunrise presents a new canvas upon which to paint our day. Tracy Lawrence’s song “Paint Me a Birmingham” comes to mind. I paint myself onto the canvas and become part of the day’s picture.

I can imagine in specific detail the column of water I am presenting the lure in and the movements of the lure through the water in relation to the motion and rhythm of my fishing rod. I believe it takes a creative imagination to be able to place oneself in situations that will prove to be productive for the time frame in which you are fishing.

Let’s start with imaginative selection of fishing areas. I see tons of things on the water each day that the guys sitting next to me might never notice if I didn’t point them out.

For example; when running outside the drop-off of a barrier island, we frequently see elongated slicks stretching downwind between our position and the shoreline, (remember that slicks are always round and small when they first appear). These are old slicks that popped much closer to shore than their present location and grew as they drifted. My knowledge of the area allows me to visualize where the slicks likely originated; guts, grassbeds, etc. From this I can then imagine the feeding pattern these fish are on and how I might apply it to similar areas farther along the shoreline.

So we know that an area of interest has been established, we need to start looking for additional signs. This is where imagination really comes into play for me. The presence of bait in an area is always a good sign but, more importantly, I try to observe whether they are behaving normally or possibly reacting to the presence of predators.

Let’s say we see mullet or menhaden lazing along and then suddenly changing their behavior when they reach a certain point. I imagine that predators are holding tight to bottom structure and as the baitfish enter that zone they sense their presence. Short hops, flips and multiple zig-zagging jumps should get our attention. Add a sucking noise and small foam ring and you definitely need to investigate.

Have you ever been running across a shallow flat and observed a large school of mullet frantically jumping, way out in front of your boat? Mullet closer to the boat are getting out of the way but not panicking. This is another situation where imagination comes into play. Could it be that a school of reds, being naturally warier than mullet, began fleeing well ahead of the boat and spooked that distant school of mullet?

Once bait presence and activity is well established, we have to get creative with not only our lure choices but also how we present them. Many believe that soft plastics, especially the rattails I prefer, are basically do-nothing baits. Nothing could be farther from the truth if you use your imagination in the presentation.

I try to work the lure through the entire water column until the fish tell me where they want it. This can change by the hour, so paying attention to how and where you are receiving strikes and the action you are imparting to the lure all become critical. At this point in my career it has become instinctive to simultaneously twitch and reel to remain in contact with the bait. I am able to imagine, and at times predict, the exact moment when strikes are most likely to occur on any given cast.

So, there I am with that supposed do-nothing lure, paying careful attention to every detail of my presentation and how the last trout I caught reacted to it. Certain subtle pops and twitches with the rod cause my lure to move erratically and, here comes my imagination again, a trout mistakes that erratic reaction for a baitfish that suddenly sensed the presence of a predator. Bingo - the trout tries to eat it.

I believe this imagination scenario is real and it works, for me anyway, and that’s all that matters. Great are the numbers of anglers that have stood alongside me for a day and had me walk them through every step of my thought process. I like to think out loud anyway and it has become an effective form of teaching…I think.

How long between strikes within this area? Say that I imagine it might take five or six minutes for a small group of the right fish to effectively hunt the area they are in. If an angler in the group is receiving a bite within this space of time, I look at his position in the line and try to imagine the direction the fish are moving.

If I am the left angler in a group of three and the right angler gets the first bite, then the middle guy, and then me, I imagine that the fish are hunting along the structure from right to left. When they reach the end of the structure, turn and start working back down the line, I’ll get the first bite, then the guy in the middle, and so forth. Happens all the time and I have pointed it out to hundreds of anglers over my career.

Only my imagination has allowed me to continually develop and prove this concept. I once had an elongated depression on Traylor Island that I called Seven-Minute Pothole. One day when fishing the area on our last wade of the day, I caught a nice trout immediately upon stepping out of the boat. We decided that if we did not get another fish within ten minutes we’d call it a day.

I honestly was not watching the clock for the first two fish but I know that on the first one I was already heading back to the boat. Then a third and a fourth were hooked. At that moment I checked my watch and it took seven minutes for the fish to cover the distance around the pothole before they returned to us. Since that day every time I stick a fish in a smaller defined area of structure, my mental timer starts ticking and I slow down and imagine what the possibilities might be for that area.

My imagination of what I can make of the situations and conditions that befall us during a day of fishing has great influence upon where and how I fish. It also plays a role when I formulate my game plan the night before or early in the morning when getting underway. I believe that a good imagination coupled with good skill is a terribly hard combination to beat. The best anglers I know possess very creative imaginations that allow them to discover and take advantage of fishing patterns. I hope this article awakens your creativity and allows your imagination to become a bigger part of your fishing.

In closing, I say goodbye to Danny Adams. Jay Ray and Ryan’s grandfather, Danny went suddenly and without suffering, which was such a blessing. He was a fishing guide in Rockport for many years and taught me more than I could ever tell any of you. The man literally knew every piece of shell in St. Charles Bay and I will think of him every time I fish there. I know that on Heaven’s shores he was greeted by his mother, dad, brother, and other family that went before him. Danny, may the southeast wind always be at your back, the waters cool, the bottom firm, and the fish biting as you wade through eternity. Rest easy my friend. If ever your wade path crosses with my dad’s, tell him I love and miss him.