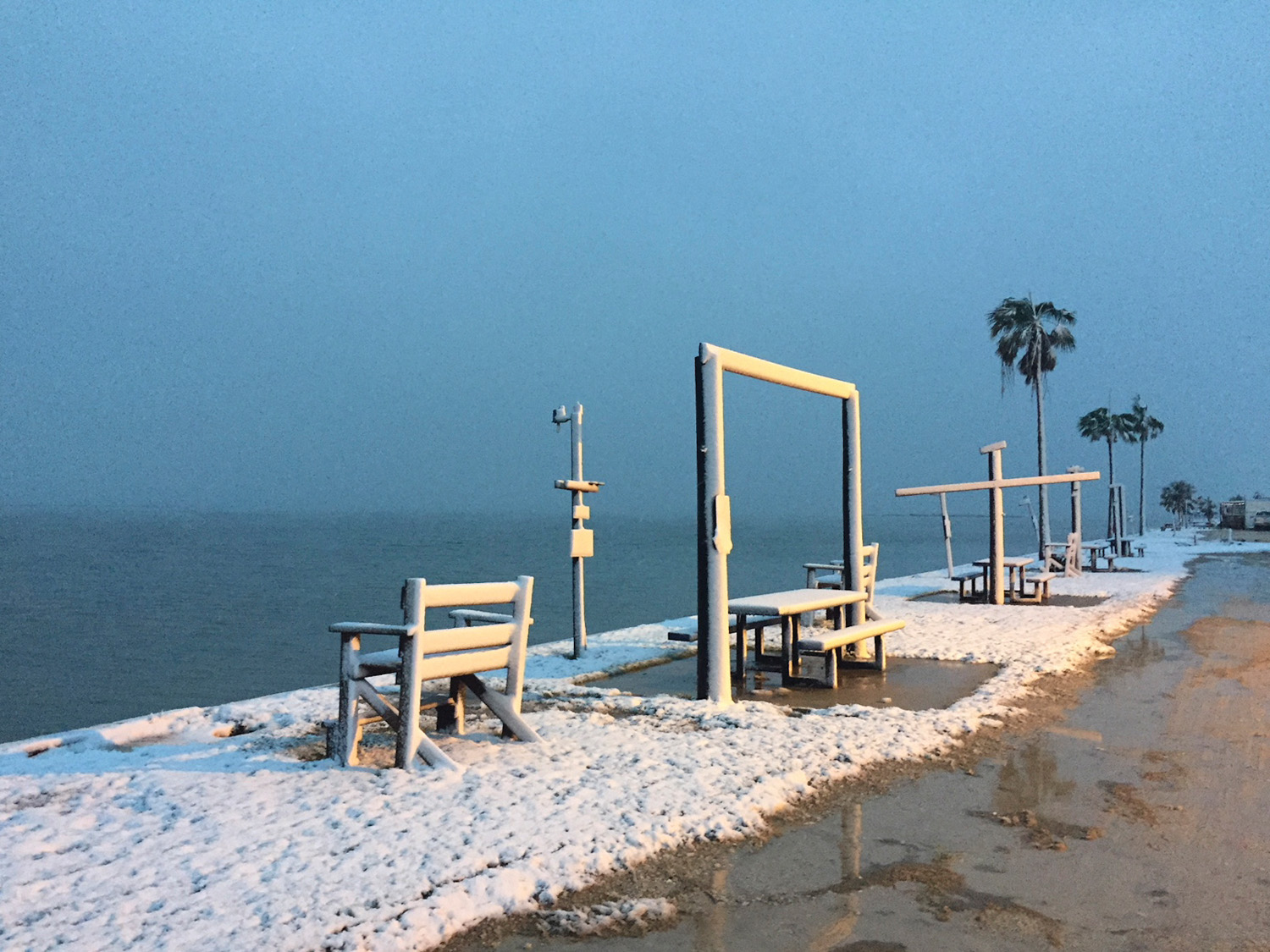 It snowed in Rockport on December 8. There’s another 2017 crazy weather event for you!

That day also marked my sixtieth birthday, so I doubt I’ll ever forget it. The photo of Palm Harbor covered in snow was made by fishing client, Robert Moll. We were scheduled to fish that morning but decided we both have plenty of years ahead to fish together without freezing to death. Had I been forced to go I would have looked for something very close to deeper water and surrounded on at least two sides by land. A pocket with land on three sides would have been even better. The snow was beautiful and refreshing for Rockport residents. For a few hours God covered our piles of debris with a beautiful fluffy blanket. The Man certainly knows how to provide an uplift when we need it.

Fishing along the middle coast is lights-out right now. Water is still extremely clear and tides remain low but this has not hurt our catching. Even when high pressure sets in after the fronts, we have been able to find pockets where bait and gamefish are congregated together. Staying with the bait is still the best way to stay with the fish – in my opinion. I’ve listened to fishermen who do not necessarily agree but it has worked for me more than thirty-five years and I’m going to keep dancing with the one that brought me.

Larger mullet makes up the majority of the schooling bait I am finding, which is normal during winter. I have witnessed so many times, large trout and redfish swimming alongside and under mullet schools. Typically, a smaller offering placed just in front of the pack brings a strike that you can see taking place. Trick here is not to get too excited and jerk it out of her mouth. Several times today I had a dozen or more very large mullet cruise by and at least half the time I could see at least one trout of 20-to 25-inches with them. Every cast that was properly placed produced a fish. When I missed it was because I got too excited. When I stop getting excited I am going to quit and do something else.

Water is as clear on average as I’ve seen in many years. Even with wind pushing toward 20-mph our shorelines show little sign of sanding. What we are seeing since the big chill set in are areas along shorelines and reefs where mullet and black drum are creating muddy streaks. These murky spots should never be overlooked as they are bait and gamefish magnets. We found two such places today and they both contributed heavy trout – best of the day.

Another thing I believe in very strongly is monitoring water temperature. I begin my winter fishing seminars with a show of hands – who in the audience have a water temperature gauge on their boats. More have them today than years past but I’m still surprised how many do not. I always tell them, “If your boat doesn’t have one you need to get one!”

For years I have been monitoring water temperatures at every stop throughout the day. Temperatures vary from hour to hour and almost without fail I can correlate catching with these changes. This is especially true when water temps drop below the 50⁰ mark. This morning it was 47⁰ when I pulled away from the dock at Goose Island and by day’s end it was running 54⁰ along the shorelines. Bait was noticeably more active and our catch increased as the water warmed. Absent the ability to monitor the rise in water temperatures, how might you be able to understand the feeding patterns?

I always like calling the shot prior to the shot being made. It’s easy to say, “Oh, I knew this was what was going to happen.” I would have loved to have been there when Babe Ruth pointed to centerfield and then belted the next pitch out of Wrigley Field. When we pay attention and monitor all that we can each day on the water, calling the shot becomes more predictable. Without this you’re running on luck, and too frequently luck runs out.

I have said for most of my career that bass fishermen (on average) are better anglers than saltwater fishermen. I say this because bass fishermen are strongly pattern oriented. This is just my opinion but I seldom have seasoned bass fishermen on the boat that do not possess serious fishing skills. They might not understand the shallow water concepts I utilize but they are quick studies and get up to speed in hurry.

On the flip side, I believe serious saltwater lure enthusiasts are equally quick in adapting to bass fishing. Ryan always out-fishes me when we fish for bass together but I tend to catch my share and don’t lose too many once they are on the line.

I think that learning to pattern the fish in regard to daily and seasonal conditions is critical to your success no matter how or where you fish. I have a log of just about every day that I’ve fished the past 35 years. It’s a ton of information but you cannot believe how accurate and useful it has been to me as I formulate fishing plans.

Right now our water is clear and cold between fronts and somewhat sandy to dirty during frontal passages. Pre-frontal conditions have been playing out classically this season. When we have been able to combine a solunar feeding period with the approach of the front the results are almost epic. I am fishing shallow despite the clear water when the baitfish remain shallow and the bottom structure is of broken grassbeds and potholes.

You’ve heard me say that having a drop-off close to feeding areas is crucial to success as the fish need a deeper refuge during certain periods of the day. Close in this sense means a distance less than 100 yards. Closer than 50 is even better.

Deep is another relative term. Deep might only be 3- to 4-feet in some areas but that can be plenty.

I follow the bite by fanning casts from shallow to deep and wading slowly. You might be surprised to learn how far or how little fish move during a day’s wade.

Another form of patterning is noting when the bite is most aggressive. Over the past several weeks I am seeing a better bite on solunar minors than on majors. Another observation that finds its way into the daily logbook.

Custom Corkys in Pistachio, Plum Nasty, Bay Mistress, Pearl Harbor, Seagrass and Jose – clear water colors in my book – have also been earning a regular position in the wade box.

Fishing in the Rockport area is outstanding right now, a sharp contrast to the reality of so many residents still struggling in the aftermath of Hurricane Harvey. Our community and those of Aransas Pass and Port Aransas are slowly returning to normal but we have a long way yet to go. Please continue to pray for us.