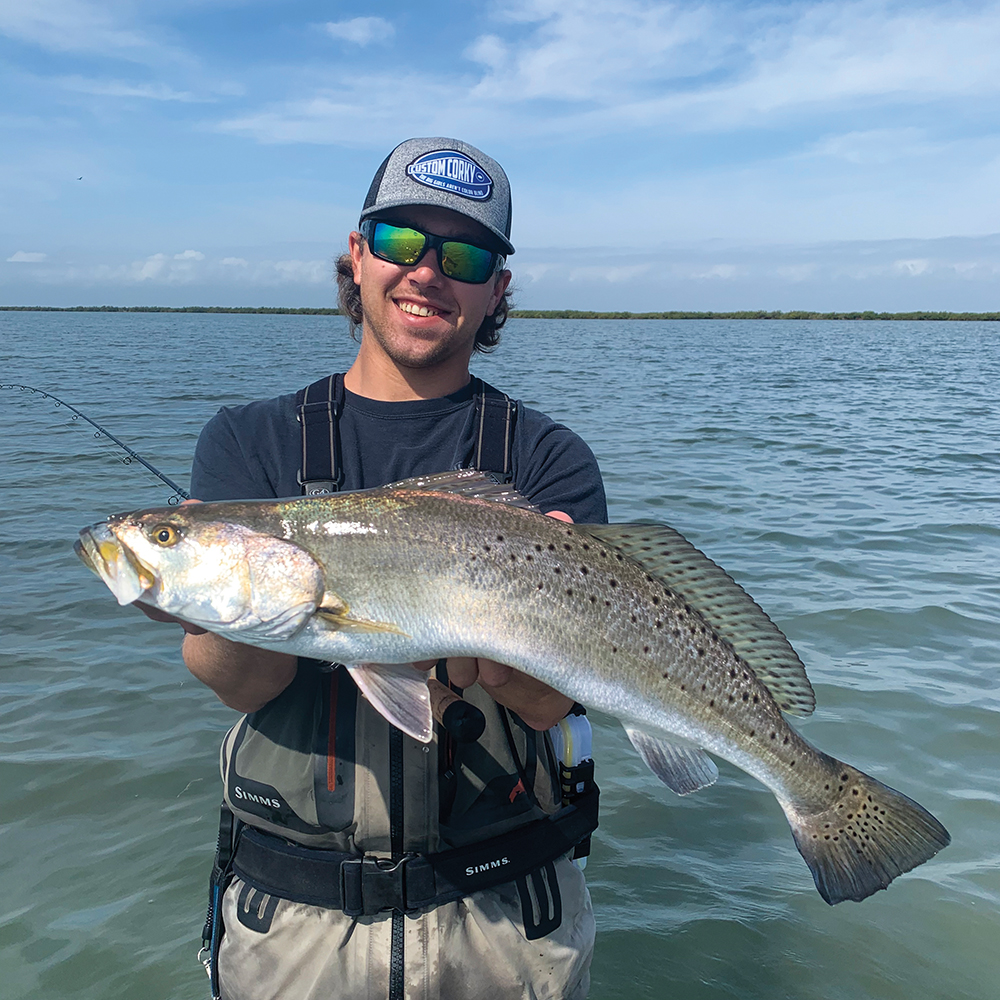 One would think that after forty years I would have this fishing gig down to a perfect science. I wish it worked that way but it doesn’t. I have access to literally thousands of entries in my fishing journals that can certainly provide clues for deciphering patterns and formulating game plans for every season, whether they be weather, tide, or water conditions. What I cannot foresee are the evolutionary changes that are occurring within the fishery itself and these unknowns are what continues to make fishing the challenging sport that it is.

I have literally fished so much over the years that if I’m not careful I sometimes fail to enter such changes into my thought process and just go fishing. It’s fun to just go fishing sometimes and sort of fly by the seat of your pants but it seldom pays dividends in my profession. Last month I talked about becoming a teaching guide and how it requires more planning and the ability to show and explain the why, when, where, and how of each day’s success. This article will be dedicated to a day last week when I was reminded of a couple patterns that I had somehow overlooked and it showed in the consistency of my catching.

I first want everyone to know that I still set the bar high. Years ago one of my clients said he never started counting until we had caught at least twenty slot-sized trout. Seems like a tall order but it’s really not when client skill sets are above average. I still keep count every day and I never count undersize fish. Today, even though numbers still matter we release 80% of our catches, thanks to so many clients becoming aware of the necessity to become better stewards of our resources.

Let me take through the day I mentioned above from start to final wade and talk about my thoughts and what they eventually led me to rediscover.

March and April can be great months along our Middle and Lower Coasts and I get booked heavily due to anglers wanting one last shot at a heavy pre-spawn trout. But pre-spawn fish can be unpredictable, especially when baitfish migrations and/or weather patterns do not align favorably with one’s fishing days. The days leading up to the trip I’m discussing here had us seeing very little bait, no pelicans or gulls diving, and very little evidence of dolphin activity. Love ‘em or hate ‘em, dolphins know where to find food and one would be foolish to not pay attention.

I am a huge believer and promoter of searching for the right signs over the right bottom structure before getting out of the boat. It is also important to note that the water was air-clear, the tide was low, water temperature was 67 degrees. The wind was ESE at less than 15 mph – fairly unusual for the final week of March. I was at about Plan-E before I saw the first signs. We had a solunar major predicted to peak at around 9:15 am. We got out and almost immediately stuck a couple of solid 20-inch fish along an area of scattered submerged grass. After another 30 minutes without a bite I returned to the boat and headed down to pick up my guys. When I was within about 50 yards one of them stuck another good fish. I quickly set the Power Pole and eased over the side. Notice I said eased. It can be hard enough to catch them at times without any unnecessary noise from us.

Before I reached the group another guy had also stuck a good fish. Then came 30 minutes of nothing as we inched slowly forward. Let me mention that the only bait we saw the entire time in this area was when we pulled up and when I was approaching my guys wading. Just keep this in the back of your mind as our day continues. Also keep in your mind that I had not yet received a bite which is going to be a very important aspect to the day.

The solunar major was coming to an end and we were still not seeing any bait. I think I might have been through the playbook to Plan-H by this time, which got me to thinking that if something good didn’t happen pretty quick we’d have to begin using our legs to find them.

A couple of 30 to 40 minutes wades went by with only a fish here and there. I had personally only caught a couple of fish, too few to get a grip on a pattern. Bites were not really strikes but light takes or just heaviness on the end of the line. Boy is this a case for owning a high-tonnage graphite stick. Henri, Waterloo, G-Loomis and Sarge get my vote but this is just my opinion. Bottom line in fishing rods is that you can’t catch what you can’t feel.

The way a fish wants the lure and the ability of the angler to recognize this and put it into play is super important. During a difficult bite I need to see and feel what the fish want and once I do I can make it happen. Trouble was that I was not able to put anything specific together. Bites were so random for the whole group that no pattern was jumping out at me and it was costing my guys.

I have always been quick to take the blame for days like this, not because I want people to feel bad for me, but because in the fishing world the guide is usually the reason. Ok, maybe some aren’t, but that’s the way I take it.

So, at about 2:00 pm, we had a solunar minor looming as I pulled up to an area that I know to be good for the season and the day’s conditions. Zero bait activity on arrival but on my first cast I had a really good 23-inch fish take my bait. I stuck it and noticed that it came from the edge of a grassbed. My guy standing next to me stuck one almost immediately a few yards away on the same grass. Baitfish that were inactive beforehand suddenly flashed and darted when those two fish were hooked.

Another angler eased alongside and I instructed him to cast to the grass out in front. Five or so minutes went by without a strike. I decided to tickle the 5” MirrOlure Provoker along the sand bottom up to the edge of the grassbed, and then lightly twitch through the grass rather than hopping the lure across it. This is possible with a 1/16-ounce Texas Customs’ jighead as the lead wrapping the eyelet has less tendency to snag grass than conventional heads.

By sliding the lure through the grass on subtle twitches, I believe it made a very good imitation of a pin perch feeding with its head down. Sunlight glinting from the bait’s red and gold glitter added additional realism and sealed the deal. By the way, I am huge supporter of gold and silver glitter, and also reddish holograms. Not much on the really bold-flashy baits, just enough to imitate sunlight being reflected from a baitfish’s scales.

On the 45 minute wade that followed we caught 20-plus fish – all solid and ranging from 19 to 23-inches. On my second to last fish I noticed it regurgitating a large pinfish as she came to hand. That’s when it all came flooding back. I recalled many years ago, Gary Clouse, a terrific old-time guide in Rockport, telling me one day that the trout he was catching were eating pinfish. In those days we would drift across the flats and could literally see the golden glinting of pinfish as they fed in the grassbeds. Oftentimes we noticed trout and reds following a lure that had a half-dozen pinfish trailing behind. Upon the approach of the trout or redfish the perch would dive into the grass, leaving only the lure for them to eat.

I used the original Kelly Wigglers shrimptails as one of my first soft plastic baits. The plastic was tough enough to withstand the perch bites without losing their tails. Those baits are still available today, owned and produced by Port Mansfield guide, Wayne Davis. We still see this “perch pattern” today if we look attentively and pay attention to the details, and Wayne’s baits are still tough as ever.

The reason the fish are currently eating perch is probably the present lack of smaller mullet. Remember I told you earlier bait had been scarce for days. With the mild winter and higher than normal winter tides, we lost little bottom grass on much of our shoreline. I would think that milder winter temperatures probably also allowed some of the smaller baitfish (perch) to remain in the shallows. Nonetheless, a pattern learned 30 years ago can still come into play today if the conditions allow and if we are smart enough to allow ourselves to think a little.

I hope you enjoyed the wade with me and my guys and I hope you gained some knowledge for what I believe can be going on at times. I also hope that reading allowed you a little time away from the issues Americans are facing right now.

On a serious note, I want us all to be safe. The Coronavirus and economic downturn are stressing everyone. We are all in this thing together and we must stay positive and keep pushing forward. America and her people always rise up no matter how dire the situation. Have faith that God takes care of us and if you’re feeling stressed about things, have a talk with him. He loves hearing from us.