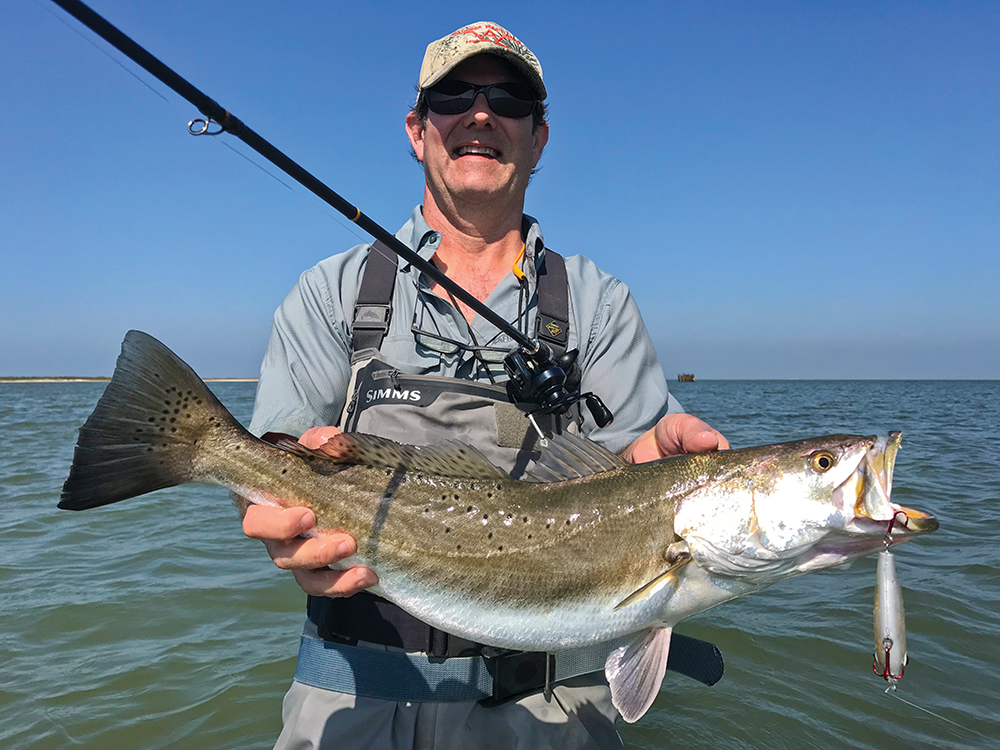 Gosh it has been a tough couple of months for our country and the world. My world of fishing seems awfully small compared to that which others have been facing. My family are all well, bored at times, but very good overall. Huge thanks to wife Renee, my step-son Cash, and Ryan’s brother-in-law, T.J. Hale, for the medical services they have been providing to the public through this difficult time. You guys have always been our heroes and now you’re heroes to others as well. My business is slowly recovering but I totally understand the reason behind such a slow return to yet another new normal. At age 62 I think I will stick with this gig to the end. I seem to be well fitted for the job and pretty good at it at times.

The water in the Aransas and San Antonio Bay complexes is really looking good right now despite only modest rainfall. With winds cranking out of the SE and tides still running fairly high we are now able to wade all the back lakes and shallow grass flats that lie south of Rockport. The small mangrove islands, bay shorelines, and many of the back lakes come alive when tides are high or when higher winds create water movement, especially along windward edges. I prefer to fish windward whenever possible but this time of year we do have periods where the winds are just too high to pull this off. This is when the back lake and flats patterns can kick in for us and create some terrific fishing opportunities.

I want to talk just a little about lure selection for the patterns that I am talking about in this month’s issue. Personal favorites will be topwaters, Texas Custom’s Double Ds and Custom Corkys, both slow sinkers and floaters. I know, when you mention Corkys in warm months and folk’s eyebrows go up. I too still have some confidence issues with these baits during warmer months.

My mainstay lures will be soft plastics in heavy doses; MirrOlure Lil John XL and 5-inch Provoker will get lots of play, as will plenty of 5-inch Bass Assassins. Tail-nipping perch drive me crazy and that’s when the slightly more durable MirrOlure plastics get the nod. For me, clear-water colors will dominate in my wading box. Now let’s move on to the real stuff.

Lots of trout spawning takes place on the full moon phase this time of year, and one of the main reasons I like to target windward shorelines and spoils. Flooded shoreline grass is ideal habitat for trout larvae and fry as well as other species of small fish and crustaceans. I remember a few years back a raccoon working a flooded shoreline along one of the ICW spoils in San Antonio Bay. Wading in only inches of water the higher winds had pushed up, the racoon used its front paws to probe the base of every stalk of grass. I was intrigued and stopped fishing to watch.

Suddenly the raccoon grabbed frantically amid the grass stalks and came up with a shrimp. A few minutes later another shrimp dinner was in hand (paw actually) and he went back to hunting. This went on until finally the animal got so close that he became aware of my presence and wandered off into the saltgrass.

I know it sounds crazy but I decided to do a little hunting on my own. Placing my rod and wading belt in the grass I got on my knees and starting working the bases of the grass stalks, slowly cupping my hands around the base of each. Sure enough, a few minutes later a shrimp flipped into my cupped hands. While I did not eat the shrimp as the racoon did I was none-the-less amazed at the lesson Mother Nature had just provided.

If we will just look, really look, nature is trying to teach us valuable lessons each and every day. From that day on I have watched the way fish move in and out of the flooded grass and watched as redfish, drum, trout, and sheepshead nose their way along, bumping the stalks and spooking shrimp and small crabs. The absence of hands requires they use their mouths to capture prey. That is why anytime I have someone tell me that a fish let go of the lure, I tell them that fish have no hands. The bait is in their mouth. They might spit or drop the lure from their mouth but they don’t let it go. It is obviously meant as a joke and not meant to be taken literally.

So, when tides are extremely high and shoreline grass is flooded, windward shorelines and spoils can offer anglers this option. When the fish are not working the flooded grass for food, say in  between major or minor feeding periods, they will not likely pull all the way out to the deeper drop-off, but stay over the harder sand and scattered grass bottom that makes up a lot of barrier island bottom structure.

I believe that when tides are high, skies are overcast and wind SE or NE at 12 to 15 mph, it is likely that the fish will not move far from where they have been feeding. I have gone on record many times saying that the best of anglers can entice a fish to bite even when the fish is not necessarily wanting to eat. Never is this more the key than when fish pull out of the grass and set up on nearby sand. Many times this sand is merely a few feet away from the flooded grass.

During the spawn, when tides are high and winds strong out of the SE, I actually plan on this pattern for daily success. Just a few days back we were experiencing a tough bite due to a solunar minor at dawn and the major not kicking in until almost noon. Early, the trout and reds were right on the edges of the flooded grass and bites were frequent from both species. As the sun rose a noticeable lull in both baitfish and gamefish activity became apparent. By mid-morning the sky became overcast and the wind dropped to a mere hint from the east. I suggest a move to the hard white sand and some scattered grassbeds in another area where the easterly wind direction would be moving water down the shoreline versus off the shoreline.

I believe that wind flowing parallel to a shoreline produces more water movement than when it is pushing water away from the shoreline. Once in the location, I told my guys that all we needed was a sign that fish are present. Trout are really what I search for but reds will setup in very similar patterns. Bait was present but not active. Water was air-clear but we now had a heavily overcast sky. The winds felt to be increasing slightly so just a lot of positive things coming into play.

I eased the boat into the shoreline and let it drift a few minutes before setting the Power Poles. Yes, poles, I have two. I will never go back to a single Power Pole setup with the middle coast winds I deal with every day, all year long. Anyway, all we needed was a sign, a sign being a bite, a slick, or an actual sighting. With water as clear as we have it now, seeing trout is not a problem. A slow move into the area of interest produced no bites but as I eased past a couple of small grassbeds a small slick popped about 30 feet to my left. A quick cast to the area was met with a strong and deliberate take. Hookset and short fight yielded a three-and-a-half pound trout. Several more casts and another fish of similar size and weight.

While fighting this fish a slick popped to my right and one of my guys placed his lure just upwind of the slick. Immediate take and a fish of 20-plus inches was on the line. As we stood patiently fan-casting to individual grassbeds, I made mention of several submerged points of scattered shell that were coming up as we waded along the shoreline.

“Look at the deeper holes the current has created along the edges and tips of those submerged points up ahead,” I told them. “Those are ideal ambush points!”

For two hours we eased along, sticking fish after fish, casting to slicks and hooking up two and three fish at a time – several times. Largest trout was 5-1/2 pounds, smallest probably a tad over 3 pounds. But larger fish could have easily been there. The baitfish on this wade were definitely still holding in the grass for the most part but the gamefish had pushed off to the secondary line of structure.

During that entire wade I was mentally trying to list how many areas I could recall where the same scenario could have played out. I’ve long been a believer in taking what I learn in one area and transferring it to another of similar layout and structure. As a young fisherman I depended on this strategy, knowing that where I was catching them could not possibly be the only area where they were biting that day. This mindset allowed me then and today to be independent of information from other anglers in my daily quest.

The advent of cell phones and social media have made getting on the bite much easier, but catching on a consistent and predictable level remains the domain of a much smaller number of fishermen. On the business end of fishing, the industry demands production no matter what anybody might believe. There are not enough jokes, sunrises, sunsets, or should have been here yesterday stories to compensate for a lack of catching. A balanced combination of all of the above, with a slightly heavier tilt on catching, makes for better referrals and better long term client relations by far.