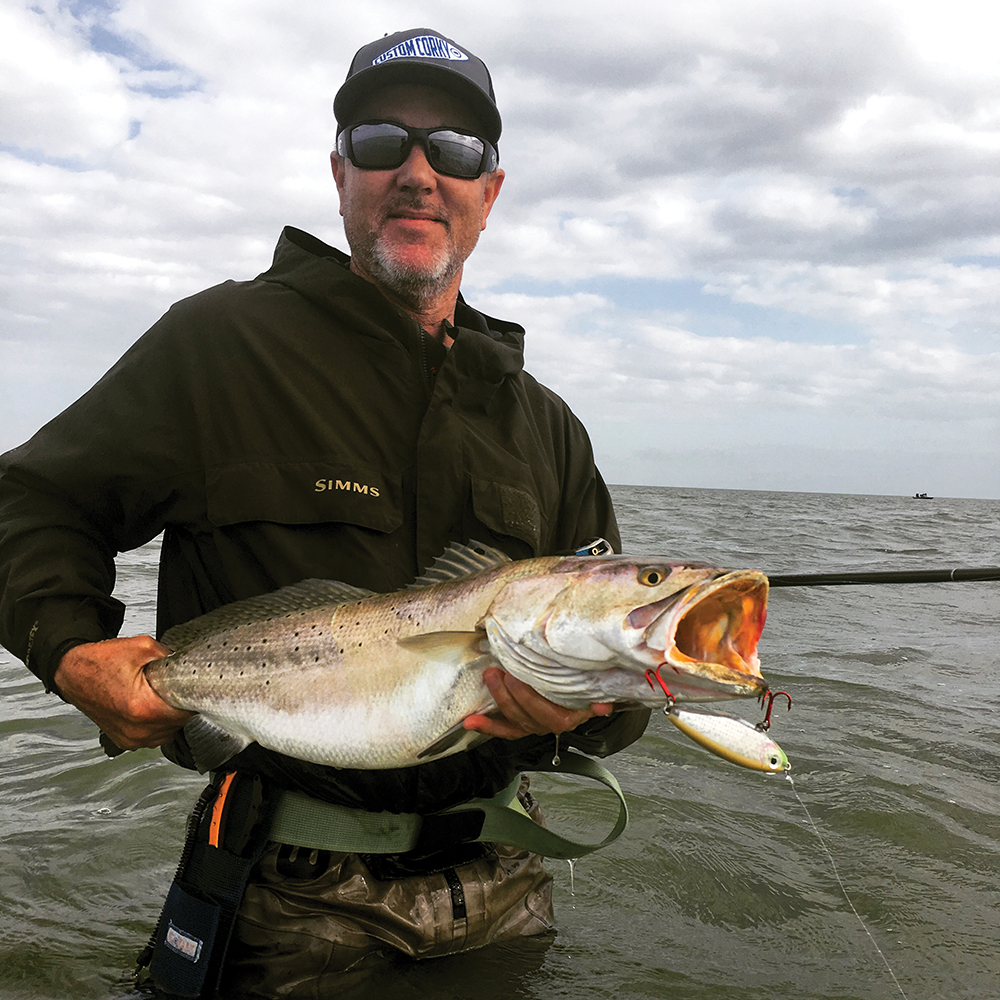 Lowell Odom, owner of Texas Customs with 8-plus on Double D XL, fishing with Brett Sweeney.

As water temperatures warm into the mid- to upper-70s, I start thinking about trout spawning along the middle coast. It’s similar to the way deer hunters anticipate the white-tail rut in South Texas. Understanding trout spawning behavior can be very useful when formulating fishing plans.

Dr. Greg Stunz of the Harte Research Institute says speckled trout are prolific spawners, capable of spawning as frequently as every 10 days, under favorable conditions. Some of the population will likely be spawning anytime the water temperatures are running 70° to 90°, April through September. Here on the middle coast, shallow grass-sand bottoms are preferred spawning structure. Through my own observations over the years, I have told my anglers that spawning begins when the water reached 77°. Mine was an educated guess; Greg’s is science.

Greg also says that distinct peaks in spawning activity occur in and around full moon periods. So, with that said, an evening in May during full moon, with water temps as described, would be a good time to wade your favorite shallow-grass shoreline. Areas to consider in the Rockport region would be San Jose, Traylor, and Mud Island shorelines, the East Flats, and our ship channel spoils to the south. Interesting that all of these areas have earned a reputation for producing lifetime trout. Kind of makes sense, though, doesn’t it?

Greg also explained that trout eggs have a high oil content, which makes them buoyant, and which also explains the voracious feeding tendencies of spawning trout and their preference for oil-rich forage – menhaden and mullet.

During spawning, females are surrounded by males. Male trout have been documented to nudge the stomachs of the females, as though to induce the release of eggs. As she releases her eggs, the males begin to release milt (sperm). Their finning action mixes the eggs with the milt. Buoyancy is important in this process as floating eggs are more likely to become immersed in milt and fertilized than one that sinks to the bottom.

Fertilized eggs hatch in 20 to 24 hours to become larval fish. Survival of the larvae is greatest when hatching occurs amid structure that provides safety from predation. That’s where the grass comes in. Buoyancy also plays a role in the fertilized eggs being transported by currents into that type of habitat.

Many believe that trout prepare nests for spawning and then guard these nests from predators. Baloney! Trout are broadcast spawners. No nest, no hanging around to protect their young. Nature tells them when and where to do it and as soon as it’s done they’re on their way. Ditto the myth that croaker eat trout eggs. More baloney!

The number of eggs released is a function of body weight. Trout of 12 to 13 inches are capable of releasing 100K eggs per spawning event. Trout of 20 inches and larger can release up to 1M. During four or five days of spawning, larger females can release up to 10M eggs. Another good reason to release fish larger than 20 inches!

Best spawning success occurs in moderate salinity – 15 to 25-ppt. Biologists have also observed spawning to occur very commonly in depths of 3 to 6-feet. We do however observe and catch spawning trout in very shallow water. In fact, the males “drum” during spawning and we sometimes are able to hear this under ideal, shallow and calm conditions. I’ve heard it a number of times.

Greg told me he has caught large female trout in inches of water, still dripping eggs, along barrier island shorelines on springtime full moon rises. These females literally had smaller grunting males swimming around them. Just so you know, Gregg is an accomplished angler and is just as adept with the long rod as he is in scientific data collection and the lab.

So this is some real science and something we can add as a tool to locate and catch trout during the spawning months. Huge thanks to Gregg and the staff at Hart Institute for all the work they have done with speckled trout.

Now I want to talk about how I look at the spawn from a fishing viewpoint. As mentioned above, I start seeing signs of spawning in the Aransas Bay complex when water temperatures reach 77° and stabilize in that range. The rising water temperature increases fish metabolism, which means more feeding and, as Dr. Stunz taught us, the need for more oil-rich forage in their diet for egg production.

Keying on mullet and menhaden becomes critical in locating trout and we begin to see more slicks streaming from structure near potential grass-bottom spawning areas. Birds are also a key piece of the fish locating strategy; gulls, terns, pelicans, even the osprey. These guys make a living snatching bait that gets too near the surface. Keep an eye on them.

Each morning I tell my clients that we need to clear the canvas and let the new day paint us a new picture. Expect baitfish to move from day to day and expect to have to adjust to this movement. Knowledge gained over many years tells me trout will follow a plentiful and predictable food source during the spawn, as long as water conditions and bottom structures continue to be favorable along the migration route. It’s a guess, not scientific fact, but it works for me.

Based on observations so far in the 2019 spring spawning period, and the trout we have been catching, I am very excited about our prospects in the coming weeks and months.

Topwater lures have never been my go-to, they’re great when the trout are eating them, but I’ve never been a fan of counting blowups, swats, swirls, and other near misses. In 2019, Lowell and Dee Dee Odom, owners of Texas Custom Lures, came out with the Double D and the Double D XL series manufactured by MirrOlure. These lures can be made to swim, suspend and float, the best of all worlds in the hardbait category, and the MirrOlure name insures the quality. Through extensive field testing these baits have earned a permanent berth in my wading box.

On days when we find trout missing topwaters, we tie on a Double D and present it however the fish want it to gain solid strikes. I love the baits, the custom color patterns and the toughness. I have several more than a year old that have given me hundreds of fish, and I still use them. I’ve had to change the hooks but they still work, even with most of the color chewed off.

Soft plastics like the 5” shad Bass Assassins, along with the MirrOlure Provoker and Lil John, also have reserved seats in my wading box. When trout get shallow and finicky, as they sometimes do during spawning, the clearer colors with added flash really get the job done. Opening Night, Cajun Croaker, Blue Moon, Watermelon/Gold and Watermelon/Red Glitter are hard to beat.

Soft plastics are not just for catching numbers. I have caught tons of really big trout, even double-digit trout, on soft plastics. It’s the old “Indian not the arrow” mindset that comes into play here.

I am still big on the 1/16 ounce 2/0 Bass Assassin Spring Lock jigheads in shallow water, but a 1/4 or even a 3/8 ounce head in deeper water coupled with the MirrOlure Lil John or Lil John XL can be deadly when fish are holding deeper. That distinct thump of a heavier head contacting bottom really gets them into feeding mode.

Many of Texas’ best guides that fish deeper water would probably agree with me on this statement. Mickey Eastman once told me that if I melted all the jigheads in my box together, I still would not have enough weight to get the lure down to the fish he was catching and I was missing! You have to love Mickey’s honesty.

I hope the science that Dr. Stunz contributed helps you understand the trout spawn a little better and will aid in allowing you to be in the right area at the right time.

Keep the fish you wish to eat but please try and release the 20 inch and larger females. They are a vital portion of the spawning population and the future of our trout fishery.