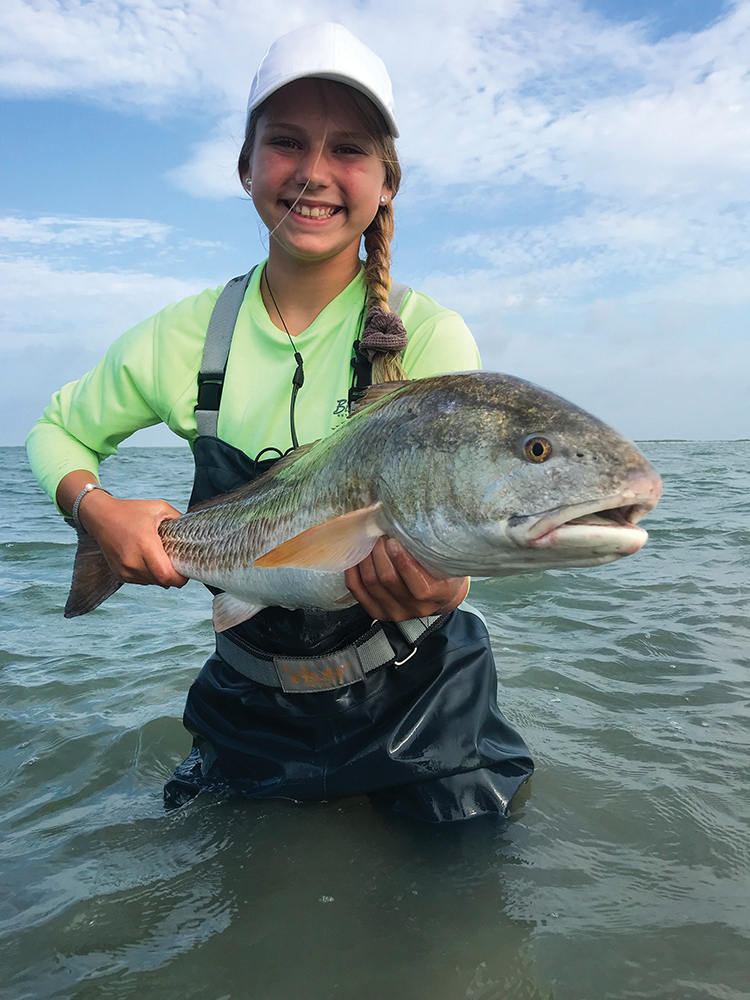 You have to love Madison’s smile as she posed with her oversized redfish – CPR!

With continuously rising temperatures and heat indexes I find it necessary to concentrate more than ever on building and executing daily game plans. Winds continue to reach the 15- to 20-mph range more days than not, which unfortunately removes mid-bay shell from the list of options many days. Locating quality fish that will take lures under these conditions can be quite a challenge.

I have always been a believer in managing my water, meaning that I prefer to avoid fishing the same areas day in day out – something that can be tough to live by under the conditions described above. Over the years I have also come to believe that continuous fishing pressure, even when practicing catch and release and keeping only a very few, can significantly reduce the number of quality fish within an area.

While an area of suitable structure has ability to reload (new fish moving in), what controls this? Do fish have the ability to restrict or manage their own numbers in areas where conditions are favorable to feeding? That would be a great question for Dr. Stunz and crew. My experience says restocking or reloading definitely occurs as so many of the areas that were good forty years ago are still productive today.

I have always believed it better for a guide to have multiple small areas with potential to produce four to five solid fish per visit versus larger, more open areas holding greater numbers of smaller fish. By making short visits to multiple small areas we can limit the pressure we place on them. This allows them to remain consistent producers for future sessions over coming weeks with my clients.

Just this past week I worked an area that started out producing a dozen to fifteen fish. Due to the weather patterns and fishing pressure in some of the other areas that I would normally have considered, I was forced to pressure this area for several days. Each day I noticed a decrease in the numbers of quality fish that we were catching but I did not see much of a decrease in the amount of bait present. What I did notice was bait acting differently, presumably from lack of predation pressure. Even though we were practicing mostly catch and release, the pressure we put on the area seemed to affect its production. Later in the week the winds let up and I was able to hit multiple areas of similar structure in three different bays. Each area would provide four to five quality fish. Simple math would tell you that after our third or fourth stop we were sitting on a fairly good day in the numbers department. Oh, for the record, Jay Ray and I do not include undersize fish in our counts.

Fishing smart requires being smart. By fishing multiple areas in multiple bay systems, anglers gain greater knowledge of the types of areas currently holding fish. Having a half-dozen such areas gives me a ton of confidence when I put my daily game plan together. Truth is, if I have positively identified a half-dozen productive areas, I can probably think of another half-dozen or more of similar structure that might also have fish, even though I haven’t scouted them yet.

At the present time I am planning my days with three key variables in mind – water temperature, tide movement, and wind velocity. Calm mornings, normal for late summer, create many great options on mid-bay reefs. In Aransas, Copano, and St. Charles bays, Hurricane Harvey knocked the tops off a bunch of stuff. Reefs that were once knee- to thigh-deep are now waist-deep and some are too deep to wade. When searching for reef options I am looking for distinct points on either end and small bellies somewhere along the backbone. Of course we’re always looking for bait. To my way of thinking, the more tightly stacked the bait, the better the fishing will be.

Points are the easiest types of reef structure to fish. I like to position offshore and cast to windward points. Some reefs have depths that don’t allow this, you just have to walk around on them and figure this out for yourself.

A belly is a low area in the crown of the reef where water flows across. The greatest aspect of fishing bellies is that so many fishermen overlook them. I prefer the windward approach whenever possible as the larger trout tend to hold on the edge on the funnel where the flow of deeper water meets shallow water rather abruptly. Redfish seem to hold on both sides, sometimes more concentrated on the down-current side.

If I pull up and find little or no bait activity I seldom even bother getting out of the boat. A prime exception would be days of dead-calm with zero tide movement following the full moon. Deep and dark wins the day a lot of the time under these conditions but that is a whole other article.

Floating grass is often a problem when the wind dies in late summer. The new Texas Customs Jigheads, with flatter head shape and lead covering more of the hook eye, are proving to catch less grass than standard jighead designs. Not entirely weedless but they definitely collect less floating grass.

In September we will begin to see upper-slot redfish schooling in the bays in preparation for their spawning migration to the gulf. Light wind and typically low tides make it easy to find them, and black drum. Yes, black drum can be caught on lures and the smaller keepers to mid-slot fish being some of the finest table fare that swims in our bays. Tripletail is the absolute best. My best lure for black drum is the MirrOlure Lil John in Watermelon Copper Glitter. A close second would be either Molting or Plum Haze-Chartreuse. In the clear waters of the Upper Laguna we had great luck with the 5” Shad Bass Assassins in Opening Night and Cajun Croaker.

As for the schooling reds, if they haven’t been harassed by too much boat traffic you can catch them on just about anything you care to chunk at them. We will see them lock up and not eat from time to time but they didn’t earn the nickname “Day Savers” by being finicky eaters. Currently Jay Ray and I are throwing lots of Texas Customs Double Ds for schooling reds in Gringo, Plum Nasty, and Toxic Tide colors. These lures are tougher than tough and you can throw them a country mile, which is a plus when working schooling fish. Oh, and if you get lucky and hook two on the same lure, the hooks and split rings are strong enough to drag them both in – assuming that’s something you want on the end of a $400 fishing rod. Fighting two at a time is not the issue, it’s trying to coordinate their individual movements during landing that causes tense moments. Hold the rod at the wrong angle at the wrong time and your one-piece rod will be a two-piece.

Mornings when the winds are up and big bays rougher than I like to fish, I look to barrier island shorelines. The points and areas around mouths of the many drains there are of greatest interest. Quite often, the smaller of these are dismissed by many anglers but they attract bait and gamefish the same as the larger ones. Submerged grass along with some type of bottom contour are the primary fish attractors. Guts that ran parallel to shorelines were very common here but Harvey reworked many of these into moguls more than pronounced guts. Be careful with stingrays in the up and down stuff; strapping on your ForEverlast Ray Guards can help you stay focused on your fishing. These areas fish best this time of year in early morning and during solunar feed periods that fall in late afternoon.

This has been a slightly tougher summer for me but, after all, it’s still fishing. Weather patterns have definitely taken a toll and we need to see Cedar Bayou reopened. I have confidence that the people of Aransas County and CCA Texas will get it done. When they do I expect positive changes will occur very soon.

The photos of the young kids in this article are awesome, right? All the fish caught over the two days they fished with me were released except for a few hooked deeper than we like. Zero problems from these three or their fathers as regards C&R. In fact, the dads made sure to explain it’s what the kids wanted to do. I think it is important that the younger generation be brought up in the mindset of keeping only what you need for a dinner and releasing the rest. I love fresh fish and have no issues with clients keeping enough for a meal or two. I do however believe that Catch and Release will play an increasing role in sustaining the quality of fishing we have been enjoying these past several years.

Rockport said goodbye recently to fishing and hunting legend, James Fox. Everyone knew Fox and all loved and respected him. I hope Fox was greeted on the shores of Heaven by Howard Brown, Tim Redden, Danny Adams Sr., Richard Loden, Wayne Lindsey, Richard Walker and Mike Sydow. Can you imagine the reunion they had? Rest well my friend and save me a place at the round table.