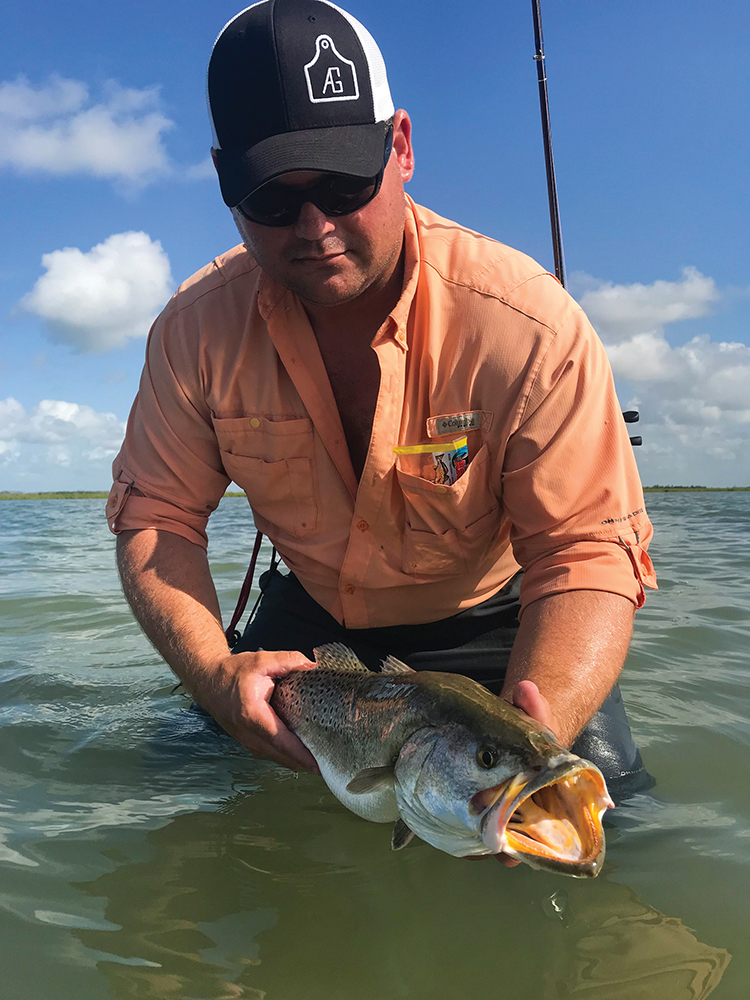 “Staying focused is the key to success during tough weather conditions.” That was the answer I gave a gentleman on the boat recently when he asked what the keys were to catching fish under brutal conditions. The day we were experiencing was indeed brutal – extremely hot and nearly dead calm. Brutal can also mean extreme cold, high winds, or some combination of these.

This past week we had low tides, full moon, water temperature nearing 90°, and little to no tide movement. It’s hard to imagine worse fishing conditions, but then the wind picked up to 20-25 mph from the SSW. So, what are serious anglers to do when Mother Nature seemingly stacks all the cards against us?

I look for moving water when the priority for the day is catching numbers of fish. Water movement can be generated by tide, wind, and even barge wakes; just so it flows across bottom structure the fish are using. I typically set up where we can cast lures up-current. Fish face into the current so, naturally, a lure retrieved with the current appears more natural than one pulled across the flow or into it. Stronger currents work better in the heat of summer but not so much in winter. Strong tidal current trumps strong wind-driven current in my book.

Several days last week I had my people standing on the down-current side of some of my favorite reefs, casting across the shallow shell to the up-current side. This was actually into the wind on one reef and downwind on another. Bites came from five or fewer yards of the sharp drop-off as the lure approached the shallow shell. Sheepshead, drum and the occasional red could be seen cruising in and out of the current. I never saw a trout but I saw several come up and bust small mullet at the reef’s edge as the bait struggled against being swept over the shallow crown.

Many like to fish the down-current side of a reef, believing that baitfish being swept across the reef to the shallower down-current side are more vulnerable. While that can sometimes be true, I have found that larger fish prefer to hang in deeper water, ambushing bait that becomes disoriented in the upwelling flow, where the current collides sharply with the shallow reef.

I also like to fish narrow passes between larger areas of shallow shell or spoil during the toughest of times. Again, moving water remains a constant as does the presence of bait. The pass is the structure that attracts the gamefish and the water movement through the pass dictates how and where they will stage.

Narrow passes with shell points or sandbars on either side provide the strongest current and the most productive ambush points. I look for swift sections with slower pools or eddies lying both up-current as well as down-current of the swift water. Many times both can be accessed on a single cast if the angler understands where his cast must land and if the angler can time his retrieve to match the drift. Once staging areas are established and the ability to repeatedly place the lure in the proper drift are understood, the angler can then entice multiple strikes. This pattern relates strongly to the ability of a prime ambush point to reload, meaning that when a fish is removed another moves up to take its place. I had a very good client and his wife a few days back that experienced this firsthand. We literally stood in one place and caught trout cast after cast for nearly an hour and a half.

Besides the passes, I also like to locate areas along long reefs where water always flows across, even with the lowest of tides. These are really just guts that have been carved by current. I find the best way to locate these areas is when water levels are extremely low. I recommend marking these on the GPS so you can find them when the water is dirty or the skies are overcast. Hurricane Harvey changed many such areas in the Rockport area, closing some and creating new ones.

I use the same tactics here, preferring the up-current side when conditions allow. Again, water movement and bait presence are the keys. The shallower depressions seem to produce larger but fewer fish. Experience has taught me to work very diligently in and around these areas, allowing time for the fish to move in and out at a normal feeding pace. Walk too fast or get too close and the larger fish definitely become more aware of your presence and less focused on feeding. Always remember that walking on oyster shell creates noise the fish can hear and feel. My dad called it “crunching them off” and warned me against it many times. Speaking of that, I think of him often as I do of several of my other fishing guide friends that have gone home and I wonder if they ever think of those of us still here.

Another pattern I employ during the toughest of conditions is fishing the outer edges of shallow sandbars and grass in back bays. Most of these are basically submerged extensions of shoreline points. During the dog days of summer and winter’s lowest tides a short guy like me can easily wade these areas. Due to the water being normally deeper over these bars, the grass will survive the extreme heat as well as the cold. The grass diminishes during winter but it doesn’t take much to hold a handful of the right fish. Surprising numbers of trout can stack on these bars on calm mornings when tides or wind is moving water in or out of back bays,

I often use my light bar to illuminate the sandbar as I approach early in the morning. The light brings the bait up where you can see it. As the sun begins to rise I target the areas of bait activity and I’m also very much aware the direction of water movement. When Cedar Bayou is open the pattern becomes very predictable due to the greater strength of the tide flow. The shallow bar provides a nighttime feeding zone as well as a daytime staging area. Water movement dictates how the predators will position themselves. Knowing these things and seeing the structure, we can make deliberate casts to specific parts of the structure to draw instinctive strikes. Instinct is strong medicine and during the toughest of times it is often the only way we can get them to bite.

Earlier this month I had a morning on such a bar. As the sun grew brighter we were able to see and aim our casts toward the submerged grass. Mullet activity and slicks popping stopped us in our tracks. Another Harvey byproduct, many of the grassbeds resisted erosion during the storm surge while the area directly adjacent washed away to form moguls – deeper zones along the edges of the grass. The depth change provides excellent ambush points for trout. Over a three hour period we caught and released at least fifty trout that ranged from two to nearly five pounds. It was a very memorable day for a group of anglers that have fished with me for many years.

So, if you find yourself struggling during the toughest of times, think back to the patterns and techniques mentioned here. Most important of all is focus. Be deliberate with each cast and presentation. Allow your lure to visit all parts of the water column. Note the depth the bite is coming from and repeat it. The nature of the bite can also tell you whether it’s a feeding strike or a reaction strike. After 40-plus years I have a good handle on what is happening and can tell a lot by the way a fish takes the lure. Honing this skill enables you to catch fish year ‘round, even under Mother Nature’s harshest conditions.