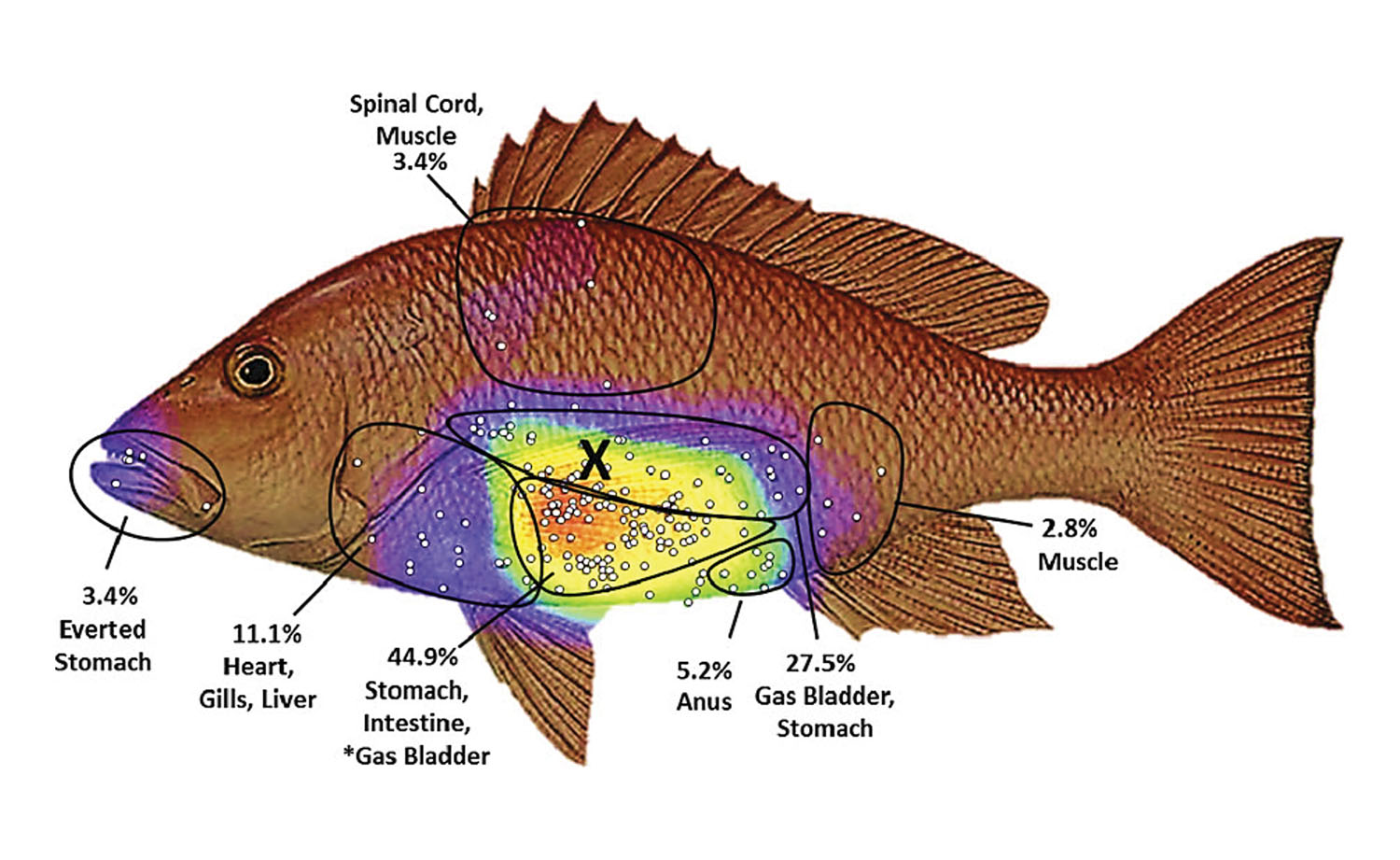 Figure 1. White dots indicate the location anglers in a large offshore fishing tournament selected as “best” for venting red snapper suffering barotrauma. Fewer than one out of three got it right!

Barotrauma occurs during sudden differences in pressure. As in cabin pressurization loss in aircraft, a diver coming up too quickly, or a deep-dwelling fish brought to the surface. Gas and fluids within the body expand rapidly as pressure decreases. Severe cases can cause permanent tissue damage and even death. Fish suffering barotrauma make generally poor candidates for accomplishing a successful release, unless something is done to relieve pressure inside the body.

Options for treating barotrauma include the ages-old venting method and a recently developed descending technique. Venting means piercing the fish’s abdomen with a hypodermic tool to relieve pressure. Descending is based on lowering the fish back into the water column.

Venting, though effective when performed correctly, is risky. Fishermen lacking knowledge of fish anatomy are more likely to miss the gas bladder than they are to hit it. In short: The fish appears to have been deflated but, in reality, it will soon die if not eaten by a predator first.

Descending devices, on the other hand, require no knowledge of fish anatomy and are very simple to operate. Studies of survival rates have revealed surprising results.

So, why is this important? In a nutshell – recreation fishing opportunity is on the chopping block. South Atlantic anglers are facing a zero-day red snapper season, second in two years. Gulf of Mexico anglers will get only three days.

Whether we agree with the way these fisheries are being managed or the stock assessment data, we are stuck between a rock and a hard place.

The feds say the recreational sector does not report its landings accurately so they “estimate” our catches and, their harvest estimates include another “estimate” called regulatory discards. A fancy name for fish we release that do not survive. Put the two together and the feds say we have reached our quota almost before we leave the dock.

So, here we are, unable to keep red snapper in the federally managed Gulf of Mexico, even though they appear more abundant than we’ve ever seen. I have watched GoPro video of red snapper in chum lines caught on fly gear, of all things!

When targeting other species, it’s almost impossible some days to get a bait through hordes of suspended snapper. Are we supposed to stop fishing because we cannot keep snapper? There has to be better way.

We either become accountable for our landings and release fish that will survive, or continue accepting fuzzy-math crumbs from NOAA and the Gulf Council.

The responsible course of action obviously lies in becoming accountable for our harvest (state water or federal water – get the iSnapper mobile device app), and descend the fish we are not allowed to retain. Beat them at their own game – so to speak.

At ICAST last July, I was introduced to a very interesting fishing tool called the SeaQualizer. A device for lowering fish back into the water column where they can recover quickly from barotrauma, without risk of injury and reduced predation.

Jeff Liederman, co-inventor and co-owner of SeaQualizer, gave me quite a presentation.

“We got started about six years ago when a friend voiced concern over fisheries closures. We went to work to develop a tool that would enable fishermen to release their fish in a fashion that would just about guarantee survival, no matter the species or depth they were caught,” Jeff said.

The product is pure genius. Based on a pressure sensor mechanism, fish are lowered to a desired depth, the fish recovers from barotrauma during the descent, the SeaQualizer’s jaws open, and the fish swims away. Release depth can be adjusted to 50, 100, and 150 feet by simply turning a dial. A larger model has settings for 100, 200 and 300-feet.

Aware that the good folks at Hart Institute have been involved for several years studying the survival of red snapper following capture and release, I contacted Dr. Greg Stunz, who referred me to Master of Science candidate, Alex Tomkins. With Alex’s assistance, I learned exactly how effective descending devices can be.

Tomkins- We wanted to determine the most effective release methods for using descender devices to reduce discard mortality in red snapper. I determined that a fish released at 1/3 of the bottom depth faces the same chance of survival as a fish released at the seafloor. This is great news for anglers because it’ll save them time when releasing fish. Instead of spending 3 minutes dropping a fish to the bottom in 200-feet of water, you’ll only need to spend a minute dropping it to approximately 70-feet. Another great feature of descender devices, especially the SeaQualizer, is the fact that anglers don’t require knowledge of fish physiology to operate it. You simply clamp the jaws onto the lower mandible of the fish, set your preferred release depth, and away they go.

Alex’s research included the release of red snapper caught on rod and reel, tagged with acoustic tracking devices. The fish’s movements revealed not only its location but also if it is still alive. The ability of descending devices to enhance survival rate of red snapper was clearly demonstrated.

I believe we as anglers have a great duty in stewardship to conserve resources. I also believe it is our duty as sportsmen to follow fish and game regulations to the letter. We cannot always pick and choose which size or species of fish will grab our bait, which means we are going to be releasing at least some of the fish we catch.

I heartily encourage offshore anglers to put a SeaQualizer in their tackle box and use it religiously to release fish suffering barotrauma. If fish are worth catching they are worth releasing correctly!