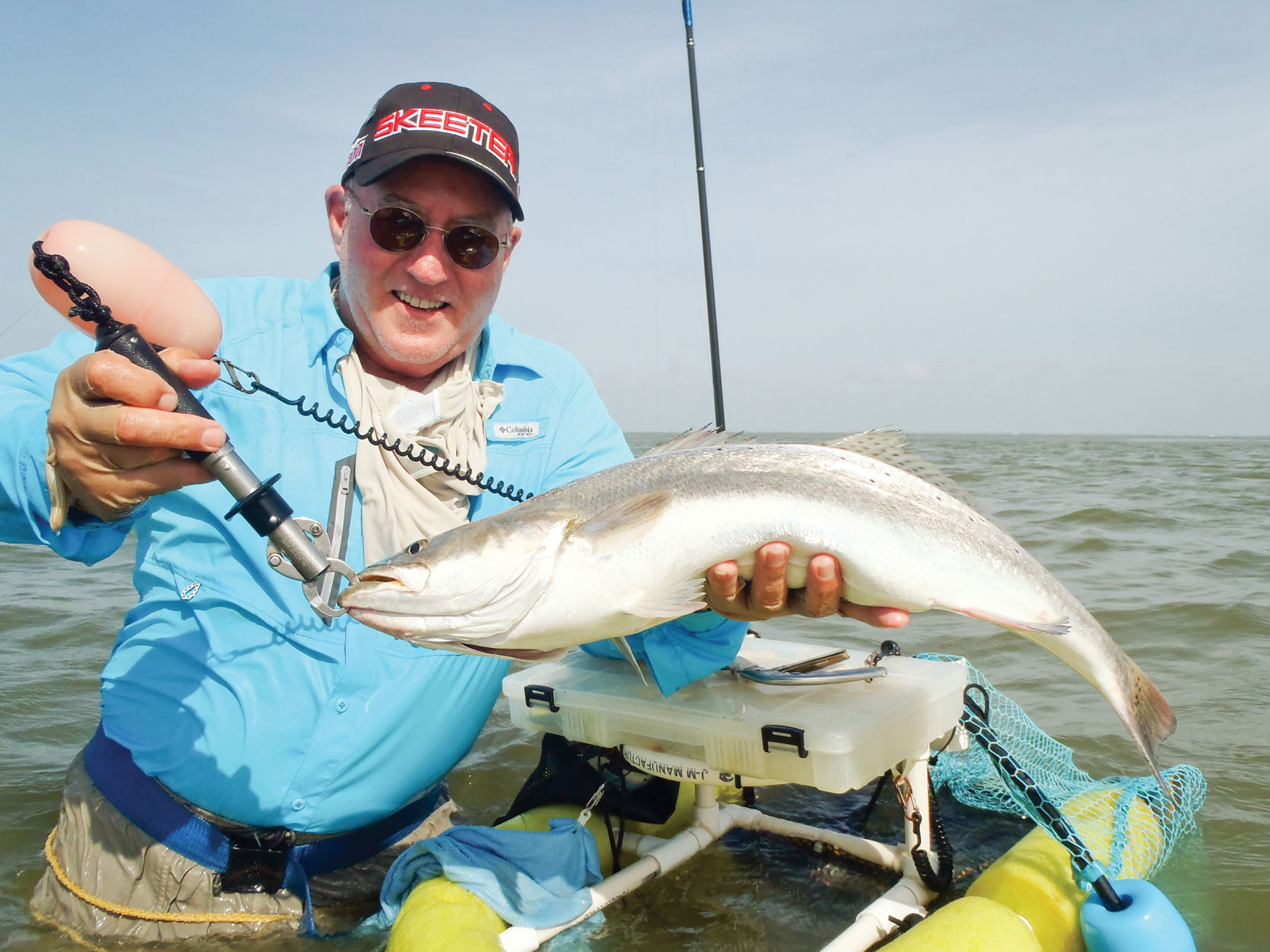 Gil Ash with solid CPR trout.
Traffic on Rockport waters seems greater this year than normal, probably due to the exceptional runoff still affecting water quality in Carlos, Mesquite, Ayres and San Antonio Bays. The best water at present in the Rockport area begins near Spaulding and stretches down to Corpus Christi Bay. There are some prominent streaks of green water developing in Mesquite, a product of tidal currents entering through Cedar Bayou, just one of many benefits we are seeing since this important pass was opened last fall.

I have written in the past of the effect that increased boating-fishing pressure has on fish and I have also touched on fishing and boating etiquette a few times. We have a new group led by longtime Rockport fly-fishing guide, Chuck Naiser, addressing this pressure and user-conflict situation – the name is Flats Worthy. Catchy name but no pun is intended.

Jay Ray and I have joined although my schedule has greatly limited my participation – Chuck keeps me up-to-date. Represented are airboaters and airboat guides, kayakers and kayak guides, fly anglers and fly guides, waders and other boat fishing guides. More guides than rec-anglers, with the reasoning that guides have greater direct contact and best opportunity to educate users. Guides (me included) have not always set the best past examples, and that's the main thrust.

The group is focused on promoting awareness of the need to display respect to all that use our waters. I know that we all have horror stories of disrespectful behavior (sometimes guides)cutting in front, burning, running through baited lines, etc. Truth is that everyone has equal right to all the water and navigable water in this day and age of extreme-shallow-draft boats is, well, just about all the water. Traffic and pressure will only grow so education is the key. With this said let me tell you how I am going about promoting better boating and fishing etiquette.

I wade-fish exclusively so I literally get run over by everybody. Airboats buzz shorelines, burners bob and weave through us, kayaker's paddle everywhere and your everyday fishermen just run where they like – not knowing any better. Occasionally a skiff poles across my wading path. All have the same right to the same water as I, and I have learned to accept this. Many are courteous and make every effort to give me plenty of room. I believe they do this because they know I would return the courtesy.

I try to take time each day to explain to clients why I run so far off the shoreline when it is uncomfortably choppy, even though my 23' Haynie Cat could easily run up shallow, out of the chop. I readily commend the boaters that are trying to do it right and explain that I am never completely upset with someone that messes us up – believing he or she has not been taught better. Part of my job is to better educate fishermen on the ways and methods that will make them more successful each time out and this is a big part of it. Losing your cool and becoming verbally abusive will not solve the problem. Practicing what you preach earns respect and Flats Worthy is definitely worthy of our consideration.

Now to the fishing. Tides are at summertime lows and the water temperatures are pushing to 85 by mid-afternoon; being early is definitely the key to at least locating the areas holding the best numbers of fish. I say locating because not every pre-dawn hour or sunrise has provided a strong feed for me the past several weeks. It is true, though, that the trout and numbers of larger trout I am seeing in the Rockport area is something we have not seen in many years. I attribute this to rainfall and the "stacking" the run-off has created.

Since the last issue of this magazine I have seen a steady push of fresh water from the north stacking bait and game fish in the southern portions of Aransas Bay. Salinity is recovering slowly in some areas but as it does the bait is staying put, and as long as there is a stable food source I do not think the trout and redfish are going anywhere, any time soon.

This stacking situation is also stacking area anglers. It's been crazier than I have ever seen but, honestly, I believe my wade clientele and I have somewhat of an advantage. I am literally arriving early and allowing traffic to push fish to my area. They do not eat every day like I want but seldom over the past several weeks have I felt that we were not where we needed to be. The bait goes down and becomes less active at times but never leaves. This makes me believe the game fish are staying put as well.

Here's a perfect example – I call it confirming that what I think I know is actually happening. I really get down on myself when I cannot put my clients on decent action, especially when every sign indicates that the right fish are present. Two days last week I had groups of really good anglers; a single "trainee" client who is showing great promise and a foursome of husbands-wives who love catching but, more than that, like knowing why they caught them.

The first day, with the single client, we located a massive amount of bait on an underwater point and adjoining flat in Aransas Bay and began our wades amid nervous water and slicking as dawn peeked over the horizon. It was beautiful and bites were coming steadily. At first it was so-so trout, nothing big, but steady. As we eased closer to the main underwater point they got bigger, nudging up to the 25-plus-inch mark and heavy as I have seen in many years. I explained that by positioning along the outer edges of the underwater point and shallow windward bar, we were placing ourselves along the exit ramp. I believe bigger trout seek slightly deeper water as the sun rises and water temps begin to rise. No matter the moon phase, I'm a believer that trout in excess of 25-inches feed primarily at night. They seem to be solitary or small pods of maybe 3 to 5 fish, perfect for exit ramp action.

We stood on the point for over an hour watching small slicks pop right up close to the sandbar. Few bites were received but I continued to comment on the fact that those slicks are from the fish we want to catch. That day gave us two bites from fish over 26 inches, right where the slicks had popped for over an hour. That is conformation that what I think I know is real.

On the second day with husband-wife duos, we missed the big fish as they exited the flat. Maybe the off-ramp was too crowded and they jumped the curb. We left and I knew it was the wrong move. Traffic was terrible with boats running all over our area. I told them we would return later but move off the point about 500 yards and see if the bigger fish would pull out to deeper water with the same bottom structure.

By noon we had caught only three fish which is totally unacceptable. We eased up to the outer bar where all the boats earlier in the day had been anchored-trolling-wading and just plain running around. In 45 minutes we caught and released at least another dozen up to four pounds. More conformation!

To me this is what fishing is all about and what makes it such a challenging endeavor each and every day. It's more rewarding to call your shots, so the next time you plan a fishing trip, try calling the shot. All you can do is miss and, if you miss, look at what you saw and then try and discover what you did not see. The missing piece will be your key ingredient, the one that makes the difference.