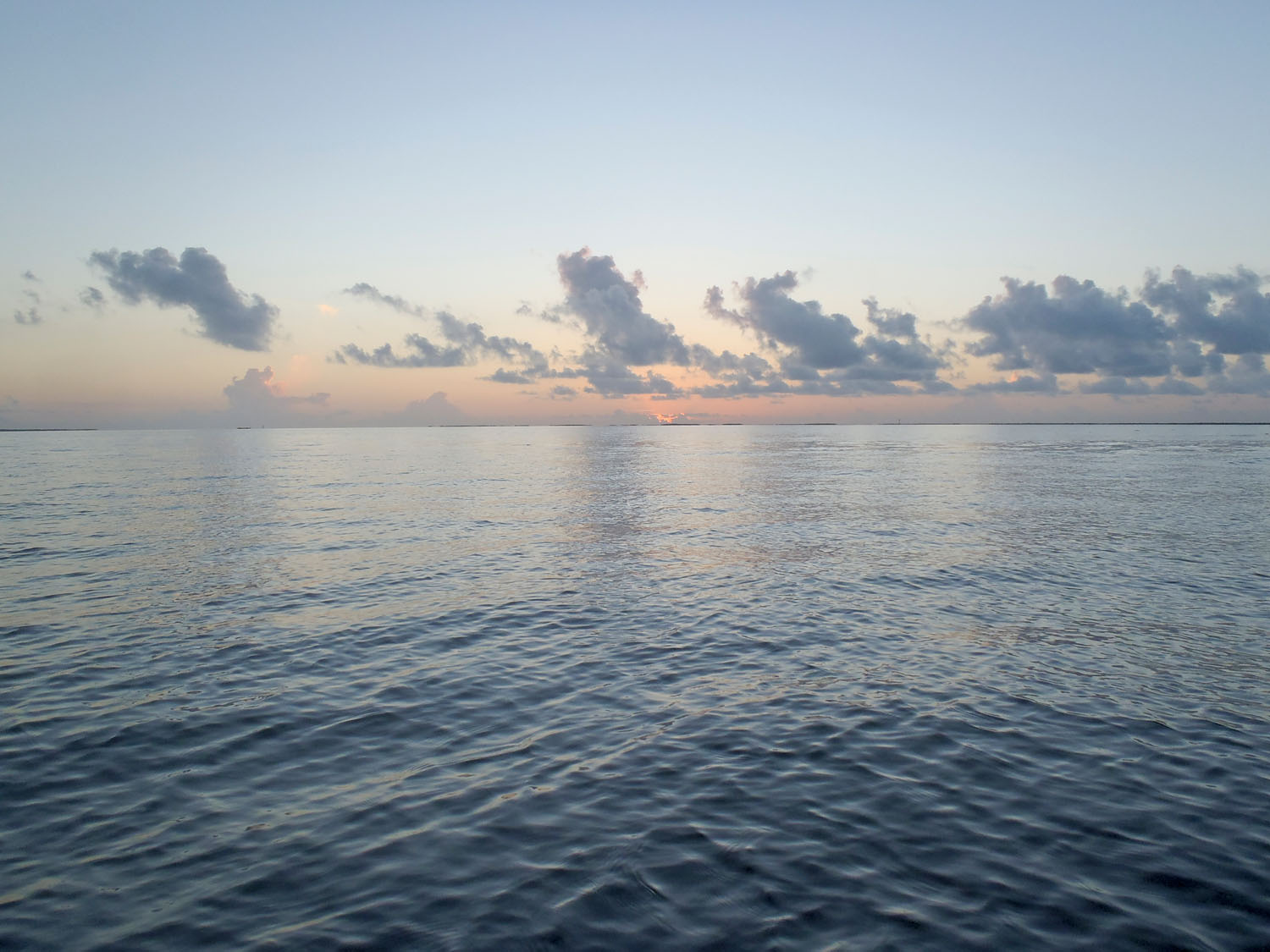 Perfect conditions but we couldn’t get them to eat.

A group on the boat posed a great question. How do I come up with ideas for my articles in this magazine? My answer was easy, "I basically write what I see daily on the water and what I believe will be happening when it hits the newsstand."

"Sounds easy," one guy replied, "But you have been writing so long you must surely run out of things to write about at times."

"Well guys," I told them, "Some writers complain often about that, and all of us suffer to some degree but, fishing as much as I do definitely helps. What would be really hard would be trying to write about something I don't know much about."

I went on to explain how my angling style assists me in discovering fish patterns. "I rely on the same handful of lures in just a few colors year 'round. My high-end tackle performs flawlessly and I don't care to be bogged down by a lot of wading gear. Through these my mind is free to focus on the task at hand locating the right fish and getting them to eat my offering."

When trying to write, it occurs that one must recognize that serious anglers have already been schooled on solunar tables, tides and seasonal influences. Ditto the various types of bottom structure and the ways baitfish and gamefish relate to it. You've been taught to monitor water temperature and to seek areas where bait is plentiful and active. You have specific baits for specific conditions and specific rods to use with them. And, Lord knows we have social media out the wazoo. So yeah finding a topic you have not already covered can sometimes be a challenge.

So, when a not-so-common pattern developed the other day I quickly took advantage and now I pass it to you. For the record, I would say that early in my career only two guides agreed with my beliefs on this pattern and used it the same as I did–the great Totsy Belcher and Billy Sheka. Many others likely knew of it, but Totsy and Billy were the only guys I heard speak of it with similar beliefs. The pattern involves rapid changes in barometric pressure sudden drops as thunderstorms or squall lines approach.

We see this occurring often during late-summer and early-fall when tropical systems in the gulf take control of our weather. Days during this period are typically calm, too calm, and make me want to pull out what little hair I have left. Add the fact that the skinnier you fish the worse this gets.

I know I cannot control conditions but, one of my biggest problems is that I actually believe I can make them eat when they don't want to. In my younger days I suffered countless sleepless nights over this, praying I'd do a good job for the clients. By the way, it's good to want to do good for the clients. It usually leads to another chance to do good again.

Years ago I would notice that on calm mornings with scattered showers dotting the coast, bites would be few, even with otherwise great conditions in play. Few that is, until a small rain cell approached. Barometric pressure falls with this sudden change, creating a short window of feeding. To be honest though, you need to recognize that one still needs to be on fish in order to get fish to feed. Think trying to take a trophy buck on a ranch that doesn't have one.

On this particular day we left the dock in the dark and ran to an area I had not been fishing due to prolonged low tide. The winds were light but low atmospheric pressure in the gulf was spawning small areas of storm activity. No thunder or lighting around, so no worries that way. We could see light rain here and there, and out in the gulf.

Though it may not seem likely, our atmosphere presses upon the face of the earth, and when pressure is low the tides will rise. I noticed the tide was four inches higher at the dock than the previous day, and high tide wasn't due until midday. I may not be all that smart but I process things related to fishing pretty quickly. A quick adjustment to the day's game plan was made dockside.

I learned years ago that a flat will gain fish in a hurry when the tide jumps suddenly after prolonged low water. Bait follows the rising tide onto grass-laden flats and trout and reds follow them.

Arriving at our spot it was obvious that the bait was already there. Several slicks dotted the flat as well, providing some proof that feeding gamefish had made the trip with the bait. With light wind and clear water I opted for a topwater even though I'm not all that big a fan. Within a few casts in the pre-dawn I had two fish nice reds of about six pounds. A few trout followed and the client on my left was also getting into them. Blowups and hookups continued until just after sunrise. For about another hour fish rose to the plugs but did not eat not even a 5" Assassin Shad.

As a small rain shower approached, the wind out front of the cell began to ripple the surface. Light rain began to fall and, as if someone flipped a switch, the bite was back. This continued about twenty minutes until the cloud passed, taking the wind, rain and the bite with it. Thirty minutes later another shower approached and the results were the same. Water that seemed sterile came alive again with feeding fish.

Having it work so perfectly, I was excited to pass my interpretation of this pattern along to the group I had that day, careful to explain that it is hardly anything we can predict but definitely something to react to when it comes into play. I experienced this pattern several more times in the days that followed, renewing my confidence and questioning why I had allowed it to get filed so far back in my fishing brain.

Sometimes it takes a catalyst like a little drop in atmospheric pressure to turn an area on. Small tropical rain showers can certainly do this for us if we are willing to resist the urge to flee a little rain, stand in there, and let good things develop.

Planning for using such patterns requires paying attention to local weather and being able to place oneself on the right piece of water at the proper time. Next time you're in such a situation and the approaching weather is not severe, stick it out and see if you can make it work. You might end up with another tool in the box for a rainy day pun intended!

On a personal note I want to thank the countless friends that prayed with us for my newest granddaughter, Jaycee Ray Watkins, when she arrived a few weeks too early. Her little lungs were not ready for our world and we had to wait fourteen days just to hold her. Mom and baby are doing great. Prayer works, always has and always will. Knee time is time well spent and I have vowed to try harder in that department. Ryan said it best. Brody, his son, made him a man. Raylee taught him to love. Jaycee has made him a believer. Wow!

May your fishing always be catching! Guide Jay Watkins