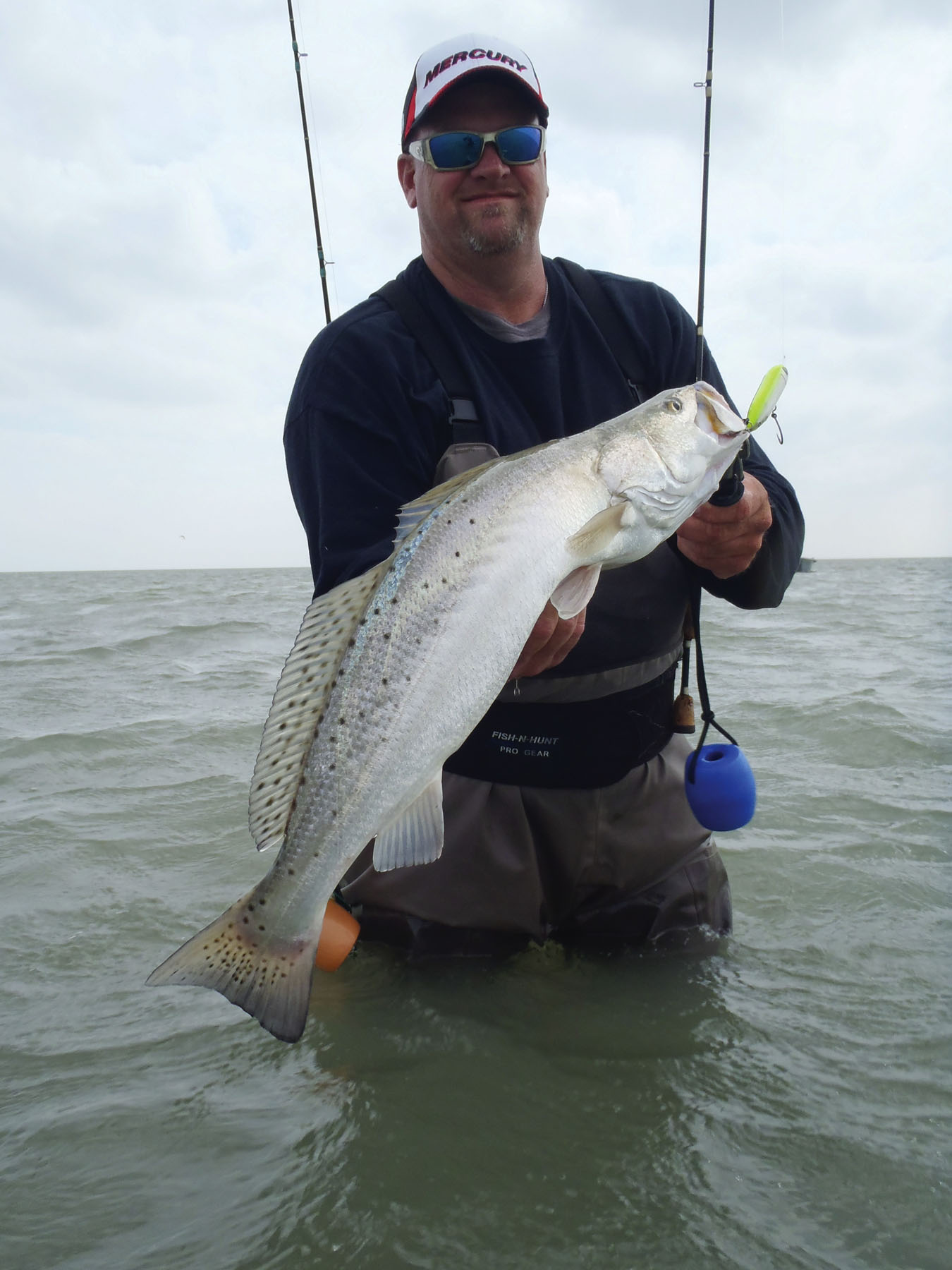 Mike Laskowski with a 6-1/4 on topwater-CPR.
March is said to be the month of big wind but after my time in Port Mansfield the past two months I am not sure the wind ever quits along the Texas Coast anymore; it certainly hasn't in Port Mansfield. No doubt the wind is our friend but sometimes it gets just down right stupid. As I write this article we are sitting at the lodge listening to the windows rattle, hoping for an afternoon let-up that would allow us to fish a few hours today.

In Rockport along the San Jose and Matagorda shorelines I will start marking areas with good submerged grass growth. With the rains we had in late 2013 and now into 2014 we should have more grass as well as grass in some areas that have been virtually void the past several years during the severe drought. Scouting for areas holding the proper bottom structure for our spring season is crucial to success. I like to mark these areas on my GPS so that when the winds dirty the water I am still able to fish the sections of the shoreline where I know there is grass, even though I cannot see it.

I have confidence in the dirty water pattern so the really dirty stuff seldom deters me if bait is present. Last month I talked about the winter clear-water pattern so I thought this month it would be appropriate to talk about working dirty water and the water changes that so often are found later during spring along much of the middle coast.

The beauty of the Rockport area is the layout of the bay system. The position of the barrier islands plus the layout of the peninsula itself allows for lots of protected water during periods of extreme SE wind, or even the occasional NE wind due to late-season fronts. Which are sure to come our way, at least during April.

I'll be looking for the arrival of a consistent 68 water temperature and finger mullet out of the gulf. Menhaden come with slightly warmer water temperatures, a little later. I fish out of Cove Harbor for most of March through June. I like this location because it affords me the luxury of being able to scout shorelines and flats as I run to the areas I plan to fish each day. Slicks don't usually start showing us the way until late-April and May but I have seen them in March.

Slicks are confirmation of a trout location. Yes, other fish create slicks but water depth and location helps me establish the likelihood of trout, or possibly other species. It is important to observe everything that presents itself as you make your way to the areas you're planning on fishing throughout the day. I am constantly tweaking my game plan in the spring because conditions are constantly changing. Expect to see good influxes of baitfish during periods of strong incoming tides. Strong SE winds coupled with strong springtime tidal surges create favorable transportation for baitfish entering the bay system out of the gulf. I follow these baitfish, believing their migrations are critical to locating gamefish, and quite often they'll move miles overnight.

Key to finding the fish that depend on this food source is simplebottom structure. This is why it is so important to monitor and mark the areas along migration paths that hold seasonal and annual grass structure. Grass is typically my main focus during the months of March through May. The growth of bottom grass depends heavily on rainfall, tidal levels and water temperatures. So far 2014 looks to be a better than average year for seagrass growth, although the harsh winter we've experienced will likely delay development a bit.

As our days and nights become warmer we should see rapid growth in our seagrass structure. Game fish simply lay and wait around the structure for baitfish to be pulled over it by tide and wind. I always try to position myself and my anglers along the perimeter of the structure and the line which the baitfish seem to have chosen, but not in a way that blocks or diverts them. By blocking the path toward structure the bait schools will break up and scatter, not reaching it. Those familiar with my tactics know I am a big believer in lining my group up as far away as possible from our targeted area and then slowly picking away at the fish holding there. Too close and you blow the comfort zone of the gamefish and this could also very well change the baitfish movement. Either one of these will change the game.

I rely on three types of lures during this time of year and most all of them have clear-silver or clear-gold body colors. No doubt I am a huge fan of Bass Assassin's 5-inch shad in Cajun Croaker and the new MirrOlure MirrOdine XL, along with the new Custom Corky patterns developed for me and our water by Lowell and Deedee Odom. I have great confidence in a gold-flash on overcast days and silver-flash on bright days.

Water in the Aransas Bay system is typically very clear during March and early-April so baits with clear bodies and lighter-colored backs are my preference. The colors on the backs of my most trusted lures will be light blue, purple, Cajun croaker, clear green, and of course bone. I also suggest 36-plus inches of clear mono for your leader. I use 20-lb test and have seldom had a failure when using braided lines of either 6 or 8-lb diameter. If your personal favorite lure colors cease to produce, try the clear bait route that I have the most confidence in.

In closing I want to thank all of you that continue to read our articles in the magazine and I enjoy the e-mails I get each month from many of you. Some of the younger generation probably think at age 56 I am too old to still be on the cutting edge. It might be true in some ways but honestly I don't feel 56most days.

I have learned a lot in 35 years of full-time guiding and there have been many rewards. Nowadays, reward for me is teaching and continuing to learn each day with anglers interested in improving their fishing skills. Watching them reach that higher level of angling skill has become my favorite part of the job. Seldom is there a week that goes by without me feeling like I have not added to my knowledge and the knowledge of others. My clients enjoy the act of fishing, catching just adds to our enjoyment. So when I cease to teach, fail to learn, and fail to enjoy, I guess I'll finally be old and ready to put out to pasture.

The photos I have included this month are husband and wife anglers, Mike and Lisa Laskowski. What a blessing this young couple has been to me and my family. Mike loves the fact that Lisa loves to fish with him, it's time spent together away from a busy schedule that they truly enjoy. Lisa is as competitive as they get. The smile on her face with her personal best tells it all. The only one with a bigger smile was Mike. Thanks for the memories guys; you always leave me feeling like I am 10 feet tall.

May Your Fishing Always Be Catching. -Guide Jay Watkins