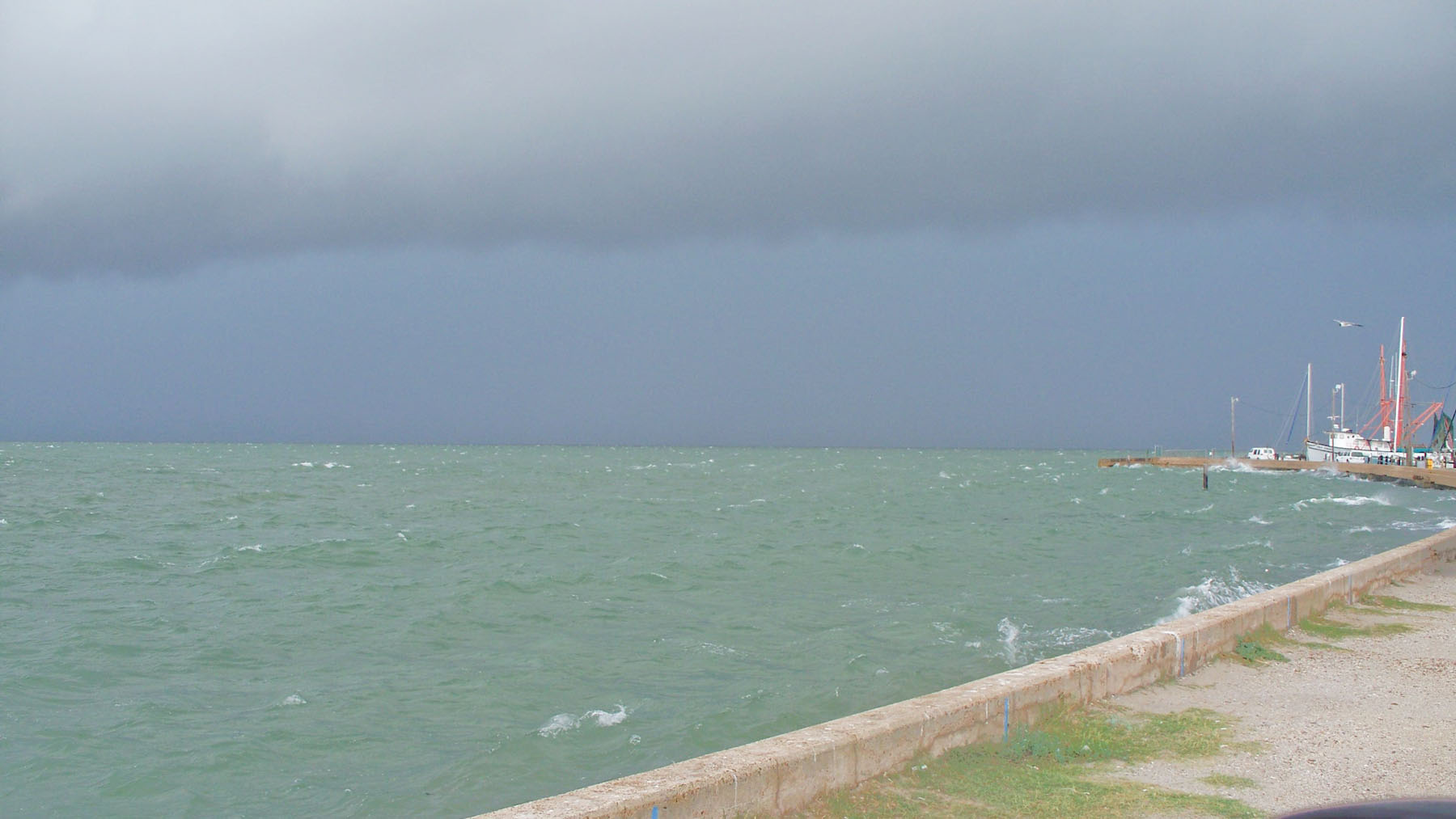 Blue norther arrives to the coast.

During much of October the feeding patterns go through a major transition and I never get truly excited about the prospects of our big-water fish moving up to the mouths of the sloughs and the shorelines until we have had what I refer to as a Blue Norther. This usually comes during the first week or so of November.

Many years back when I was much less knowledgeable of what actually occurs when a front of this strength pushes through the area, we called it Blue Norther Day because we would meet at Klines Caf in downtown Rockport after canceling our trips and drink coffee and talk about all the things guides talk about. Little did I know that the years best fishing was kicking off while I sat inside with my hands wrapped around a warm cup of coffee.

I became aware of the pattern simply because I was booked solid and one morning a group of tough fisherman insisted on trying if it was not too dangerous to go as I had no days available to reschedule them. So with a 25-plus NE wind we headed out of St. Charles Bay marina and hugged the Black Jack Peninsula heading towards Spaulding. I knew from our duck hunting rides to San Jose that this shoreline offered the most protection.

I ran a 23 Majek Commercial Skiff at the time so we had plenty of boat under us with the ability to run tight to the shoreline to stay out of the heavier chop. As I passed the first group of salt cedar trees on the shoreline I noticed birds working a very small drain that fed a tiny back lake. This drain and backwater lake are still favorites of mine, by the way.

As I passed the mouth of the drain I saw a fish blow a bait fish out of the water up in the drain itself. For some unknown reason I kept going and as I eased in towards the mouth of Dunhams Bay I noticed birds again working an even smaller drain just inside this relatively small system. The water was dirty along the shoreline due to the NE winds, but a clean stripe of water was literally pouring out of that small drain. Even in the high winds I could hear the fish busting bait as we prepared to exit the boat.

In the old days of heavy boot-waders we did not dress at the dock. Safety-wise, I did not want my people wearing bulky waders while running, especially when conditions were less than favorable. Suited up and ready we eased over the side and walked, me leading of course, towards the mouth of that little drain.

The mouth and all out in front of that drain was literally alive with activity. Cast after cast with Kelley Wiggler plum or motor oil shrimptails were met almost instantly. What shocked me most was the size of the trout that we were catching in way less water depth and clarity than I had ever considered fishable. Looking back, it is embarrassing to remember how much I thought I knew; when in reality I knew very little.

We had enough fish in enough areas with little to no fishing pressure back then, so I thought I really was something special. On the day of the story I am relating, I learned a pattern that I still use very effectively. We are never going to learn it all, therefore we can never know it all. Best we can do is be aware that we need to keep our eyes and ears open and continue to learn something new everyday we are on the water. The toughest conditions can be the best teachers.

In the last issue of this magazine Mike McBride had a great article on Jerry Dunn. I met Jerry many years ago but I doubt he remembers me. I was still in high school working a summer job for a few weeks in Zapata, Texas. A friend of mine and a crew of his dads were building some housing for the Beacon Lodge on Falcon Lake. Jerry was a legend even then and still is today!

I look back at my 30 years of guiding and tournament fishing and all the changes that have occurred, and then think about his 45 years and all that he has seen. Things have certainly changed, theres no doubt. For me, the biggest change has been me.

For quite a few years I operated with the attitude that the more you bring to the dock the better guide you are. Then to Just Keep Five releasing all trout over 25-inches. My attitude continued evolving toward keeping just enough for a meal or two with wintertime release-only trophy types of trips. Nowadays it is the quest for that special fish of a lifetime and releasing as many as can swim away in healthy condition. My most favorite campaign of all.

Understand this. I do not have a problem keeping fresh fish to enjoy around the table with friends and family. I love fresh fish as much as anyone and keep a few for me and Renee some days. I have enjoyed a better trout season in Rockport this year and there is no doubt there are stocks of small fish are available in good numbers.

Believe me though when I tell you; we anglers can and do have an impact on that small percentage of slot fish that graduates to trophy class each year. I am amazed at the short memory of many of my fellow guides when we discuss the past few years of trout fishing here in Rockport.

We have got to take this game into our own hands and start educating the young as well as the old in the saltwater fishing community. Look at bass fishing if you really want to see what can be done. Better than that, stop by the Lone Star Lodge this winter in Port Mansfield and reflect with me while majestic whitetail bucks feed in the front yard. Who knows maybe well catch Jerry at the Windjammer Caf having a burger.