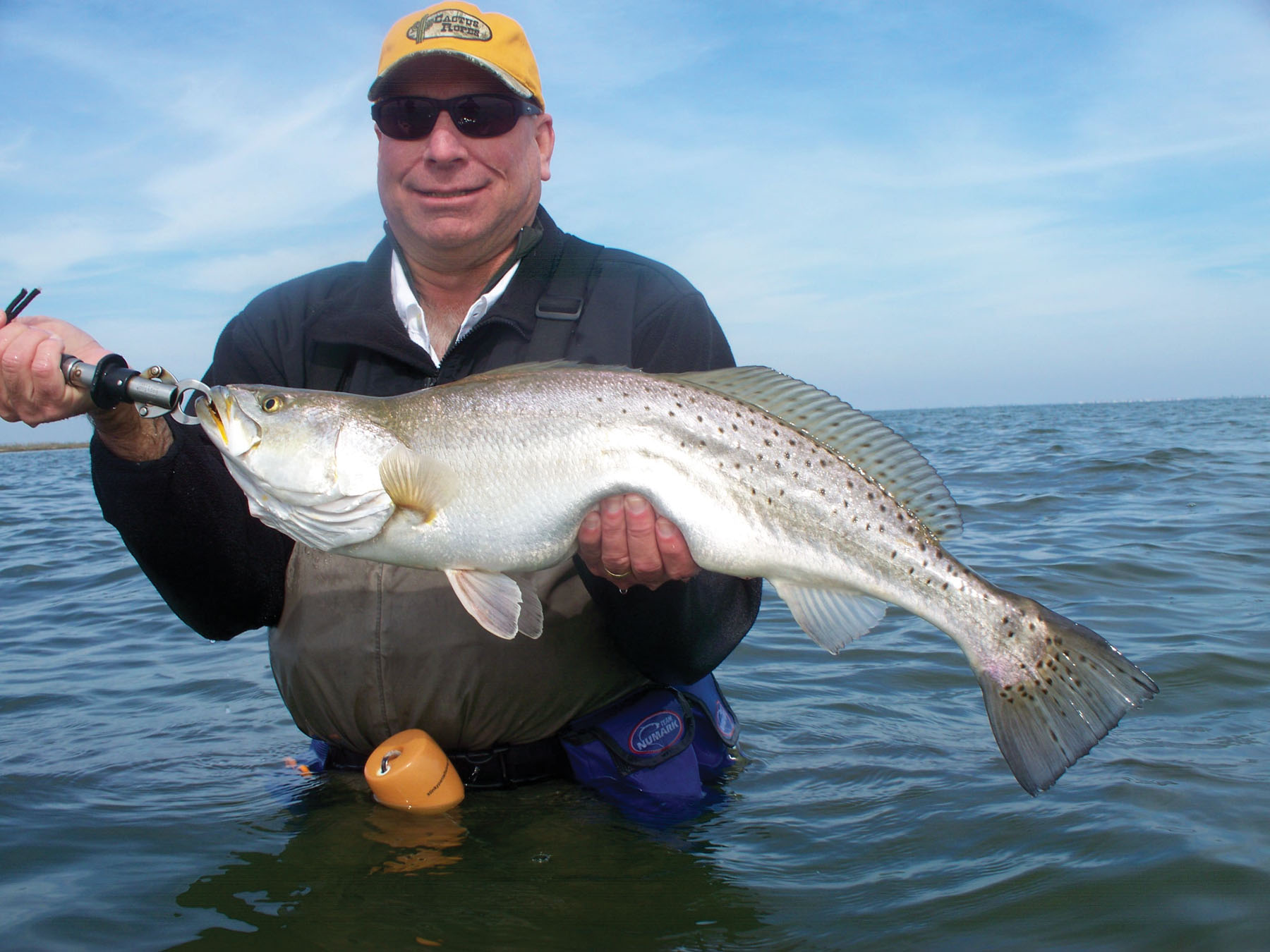 Just shy of nine pounds, released immediately after photo. The end of a successful chase!

First let me say thanks for all the comments I received on last month's article. Your comical responses and the personal "C'mon Man" moments you shared were great medicine.

This month we're going back to the meat and potatoes of chasing trophy trout. I chose this topic solely because February is prime time for the chase. Chase is the correct term here because that is what it has been since day one for me. I doubt any of us will ever figure out the entire puzzle but I hope and plan to chase it as long as I can.

For whatever reason trophy speckled trout are one of the most coveted of all species and it is impossible to describe the excitement and adrenalin rush when a career-best trout is at the end of your string. Every experience is unique to the area you catch the fish; the circumstances that led to the chase and the execution of the game plan you had laid out for the day are all pieces of the reward. You see, being consistently successful on trophy trout requires a special mindset that one must acquire in order to tip the odds in your favor. We must be able to visualize the entire day and then be dedicated to allowing it to play out.

I believe that most anglers eliminate themselves from the game before kickoff without even knowing it. So back to the old 90/10 rule - If 10% of the trout fishermen catch 90% of the trophy fish, that means 90% are simply not getting it done. I have spent a lifetime trying to raise the 90% group to the 10% level of performance. Early in my career I did not realize the importance of teaching my anglers how to identify and use the clues, nor visualize the possible outcomes beforehand. Instead I said, "Look here - use what I use, throw where I throw, and try to make your lure do this."

That's not truly teaching but it will put fish on the end of the line many days. I now realize some thirty-three years later that unless the lessons are presented clearly and in great detail, only the truly dedicated will reach the level of expertise necessary to consistently catch trophy-size trout because they targeted them. These few will achieve their goal with practice, patience, persistence and a positive attitude.

One thing ALL successful trophy trout fishermen possess is the ability to visualize the entire sequence of the day in their mind before it actually happens. With this said, let me tell you how I see it in my mind's eye before I make the first cast, and with each successive cast, not just the first. I go as far as mentally rehearsing trash talking at the dock after showing pictures of the fish released that day. Mind you now I am not cocky, I am confident. Huge difference!

When in trophy trout mode I try to see the entire picture in my mind before it actually happens. You might think that's a bunch of BS but I actually see it. If it doesn't happen then that's just the way fishing goes. But when it does happen, it typically plays out quite the way I envisioned. A positive attitude wins far more for you than it causes you to lose.

As my boat comes off plane I am already scanning for signs of activity: any amount of baitfish movement, an osprey soaring or sitting nearby, a brown pelican gliding parallel to the shoreline, grassline, or some other structure. These two birds seldom lie. I know my chosen area well, every grassbed and every depression in its bottom. I ease along on a line that will allow my cast to cross bait and structure at slight angles. I aim the lure beyond the structure that I see the fish on in my mental picture. I watch in my mind the action I am putting on the lure as it swims toward the target. I speed up and create an erratic action as the bait approaches the zone. I envision the fish eyeing the bait as it approaches. Now a short pause, allowing the bait to flutter on the edge. Now another sequence of sharp erratic movement and a longer fall. I see her bristle up and arch her back to strike…KaThump!

A sudden jerk here could cost you the trout of a lifetime. Don't do it! Crank down on the reel to gather slack created by the strike and then quickly point the rod in the direction of fish. This has to become an instinctive act executed with speed and precision. When the line and rod start to load, hit her with a quick, sharp upward motion. The loading of the line and rod allow help keep the line tight following the hookset.

Now I am watching the line as I maintain a heavy, steady pressure. I want to be prepared to react when the line starts to rise. Here it comes, get your rod tip down and try and prevent the trout from breaking the surface. As beautiful as it may be on film, this is not what we want a big fish to be able to do.

Here she comes to the top, get the rod tip in the water and crank her back down. A violet thrashing eruption but the inability of the fish to be able to get her body entirely clear of the water indicates a truly heavy fish. Now keep heavy, steady pressure, no long heavy pumps on the rod and certainly no jerking back when she decides to run off some line. My drag is heavy but silky smooth, an absolute must for trophy trout. She is starting to circle. Now we'll play tug-of-war with a few feet of line being stripped with each burst of energy.

She turns left and I roll my wrist only and apply pressure from the right. This tug of war lasts only a few minutes as she tires. Be prepared for a final run right at your feet if you get the rod too high on her. I like my rod more parallel to the water when I get the fish in tight. When close enough, I slide my hand along her side and get her in position to place the Boga Grip on an extended lip when she opens her mouth. The Boga trick can be tricky so go easy and be careful not to get it tangled in the line. Once on the Boga I lift her up and discover she is just shy of nine pounds but due to her short length of only twenty-nine inches she looks huge. Quick photos and hand slaps from Jay Ray and Ryan and back she goes to someday reward another angler who has put in the time and effort needed for this chase.

I hope you enjoyed reading about the visual and mental aspects of the big trout game. As always my vision is mine alone and works great for me because I believe with vision, skill, a little luck and the power of positive thinking everything is possible.