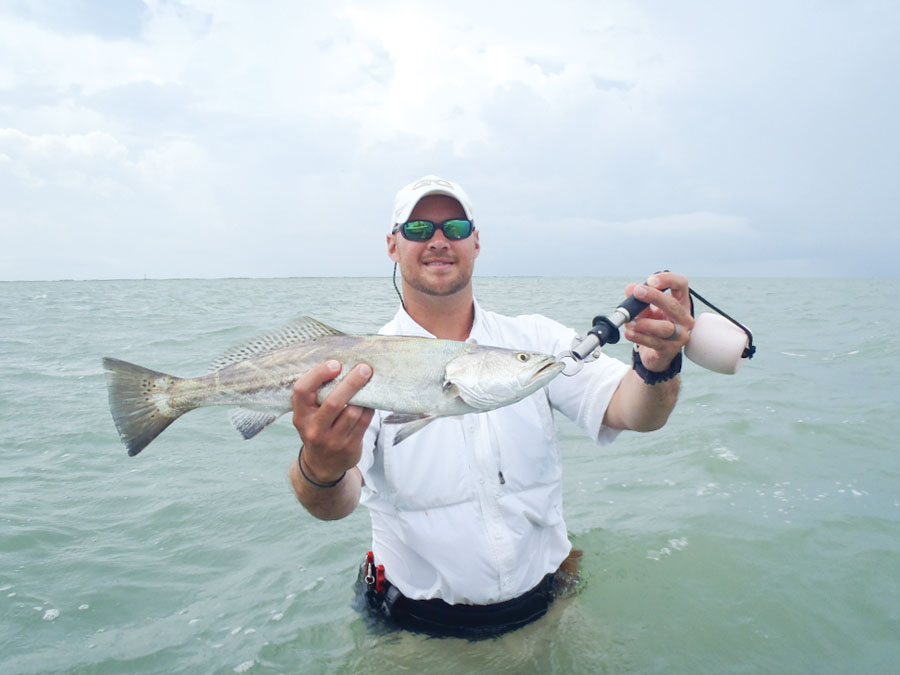 September has been a test of Texas fishermans will with lingering heat and an abundance of generally unfavorable wind. I have no data other than my daily journal entries but it seems that drought years include too much south and southwest wind. A prolonged combination of these will often make for tough fishing conditions. Luckily, for whatever reason, catching has been better than I expected considering the wind, extreme heat and little rain.

October marks the beginning of a transitional period in the Rockport area. It can still be quite hot at times and tides low, so we will continue to have some water heating issues. White shrimp will be all but gone from the marsh and back bays. Moving water, no matter what it looks like, should be investigated if baitfish are present. More than any other time of the year anglers must be totally in tune with the possibility of change.

As the first cold fronts approach the Panhandle wind will become increasingly stronger out of the southeast. This can help your fishing if tides have been low and water movement minimal. In northern Aransas Bay, Mesquite and San Antonio Bays, I concentrate on three methods of locating and catching fish in October. I am a believer in locating areas where fish live that are adjacent to their primary feeding areas. This game plan gives me two chances at them on the preferred feeding grounds during major or minor feeding periods - and again when they retire to their adjacent living area between feeds.

The first method I employ is locating nighttime feeding areas. I believe the apex predators (trout) become increasingly nocturnal with age. Nature builds survival instinct into the gene pool to enhance survival of the species and part of it is night feeding. I look for areas of shallow grass, sand or scattered shell that exist close to deeper water that holds some of the same characteristics. I like these areas to be along windward shorelines or spoils. Wind is our friend and it is a fishs friend too, providing water color, higher oxygen content and a stacking of the bait species. The rougher the surface, the harder fork-tailed baitfish have to work to stay off the shoreline. The harder they work the more vibration they create. It gets worse from there, trust me.

Fishing windward structure allows the angler to position himself offshore of the shallow structure and then cast at angles across it. Start out as deep as you feel comfortable. If you motor in too close youve blown your cover and the largest of the large will be long gone. OK- I pull too close sometimes, but Im short and prefer not to tread water for the first couple of casts.

Once a line is established, and I spoke of this last month, you must be diligent in holding your ground. Do not allow wind, your casting effort, or a hooked fish to pull you in on top of it. I see it all the time. Cast and take a step forward. Catch a fish and walk two or three steps forward trying to land her. Hang the lure on grass or shell and start walking in to free it. Get the picture?

I am constantly instructing, sometimes cursing under my breath, watching my anglers hedging too close to the line. I had a guy ask me one time why I always lead the wade. I eased around behind him and started fishing and he asked, Where are we headed? Everyone except him died laughing. I lead because I have the best nose for what were doing. Its that simple.

The second method is what I call fishing where fish live. Many times due to extreme heat and the stars just not lining up right for aggressive daytime feeding, I must resort to working areas where I believe fish simply live. This is very true during times of gradual changes in the seasonal conditions. These areas are typically in slightly deeper water but in close proximity to favorable feeding grounds. I like areas that have similar bottom structure but it can be limited in comparison to the actual feeding area.

Gamefish and bait alike will seek shelter in slightly deeper, darker and cooler water during non-feeding periods. The key to getting strikes when they are not feeding is in finding concentrations of fish. The way I see it, when theres a bunch of them, even though they are not feeding, theyll take a bait simply to prevent their neighbor from getting it. Again, my beliefs and my confidence level talking here - it works for me.

In fact, it worked just today on a deep drop along a mid-bay spoil where we had caught a dozen or so really solid 20-inch class trout at daybreak. Come midday we slid back in, casting as deep as we could to an area adjacent with the same mix of harder sand and scattered shell. Give the lure about a four-count to get down to them, and then a slight but deliberate twitch. Let it fall again and, thumpyoure on. Five casts yielded five identical fish, then the bite slowed. Why? There was no competition. Moved 20 yards or so and it started again with nearly the same result.

You are catching because you are fishing where they live when theyre not feeding aggressively close to that shallow spoil area. By the way, they prefer to feed shallow because it is easier.

The final method in this trifecta is a classic wind-blown water moving through the reef/sandbar guts and saddles. This absolutely works and it works best if you have staying power and confidence that you can catch quality fish in less than a foot of water with zero visibility on a lure. I had a client refer to this as the drilling mud pattern due to the water that day being more like lightweight drilling mud than something youd like to fish in.

The key here is hard-moving water and the presence of bait that is being washed through the gut or over the saddle in the reef or sandbar. One of the telltale signs is the presence of terns and pelicans. If these guys are hanging around you can bet there is some bait. This pattern manifests itself during some of the first hard fronts of the season as well as during an approaching frontal pattern when strong southeast winds are created.

In moving water over heavy clump shell, I believe it pays handsomely to use the Bass Assassin Pro Elite Jig in 1/16 ounce weight with 1/0 or 2/0 short-shank hook. Heavier, longer-shank hooks hang up badly and the last thing we want is to be retying when we should be fishing. Braided line is another must-have, and if your going to use a leader (I do), go with 20# Seaguar fluorocarbon for best performance. Casts should be made at slight angles to the direction of the water movement, slightly up-current. This allows the bait to follow the current line which sweeps the bait towards the fish in a very natural manner.

Trout, reds and flounder will position themselves into the current. Their broad tail provides the power and maneuverability to feed in swift current. So even though late-September and early-October can throw us some curves condition-wise, we find ways to produce and thats the challenge of fishing. I continue to love what I have been so fortunate to be able to do for so many years.