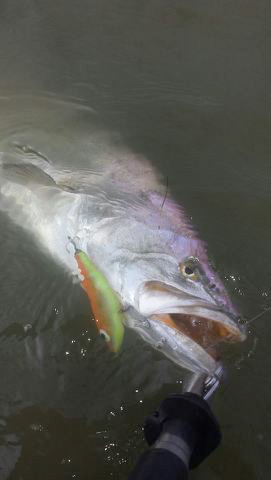 I named this fish the Corky Stopper! Custom Corky – Gold Hologram, for stained or fresh water.
I had a really good story line in mind for this month but then the tides went low and we received even more rain, which led to even more run-off, which led to really stained water. I decided to talk instead about what I have been doing to catch trout in these conditions. It is widely regarded by many fishermen that redfish are not as affected by fresh water as trout.

I owe my confidence in catching trout in brackish to downright fresh water to long time Galveston guide, Mickey Eastman. One afternoon on Sabine Lake, prior to a TroutMasters tournament more years ago than I care to remember, Mickey sold me on not worrying about fresh water run-off. There is of course a limit as to what the trout can or will put up with but seldom along the Middle to Lower Texas Coast do we have to worry about too much rain creating salinity levels that completely run the trout out of a system. Mickey tasted the water before his first cast, "Perfect," he said. So I dipped a handful and tasted for myself. You see, I was unsure what "perfect" tasted like. Never forgot that lesson and it has saved the day more than a few times for me over the years.

In many cases the fresh water, due to being lighter, lies only in a thin layer at the surface of the water column. In St. Charles recently I could actually see the salty green water in my wheel wash as I motored into the shoreline.

I am still concentrating on shallow areas of structure such as scattered shell, submerged grass beds and sandbars. The sandbars for some reason seem to be more productive than the other two types of structure lately. Not sure why but the mullet seem to want to congregate on these bars and the results have been good numbers of above-average trout and redfish cruising the adjacent deeper guts and drop-offs.

One day last week was like magic, we eased up on a mid-bay bar and noticed hundreds of mullet milling over the top. I immediately instructed my two guys to NOT walk up on the bar or into the bait. "It's going to happen right here if we allow it to develop," I barked. I tend to do that when I get excited. My way of coaching.

My group did terrific and we had a 40-plus release day and even kept enough for a fresh trout dinner.

Here's my theory on this; why the bait wants to be so shallow. Shallow evidently feels safer to them than the stained water that surrounds the bar. Gamefish stick out like a sore thumb on white sand, I promise, and hunting there has to be tougher for them. I believe the mullet feel safety in numbers, and up in the shallow clear water, they have a better chance of escaping. Probably hog wash but it has worked like a charm the past two weeks in about four different bay systems. I am headed to Baffin in the morning to test my theory in brown tide.

My understanding is that during periods of abundant rainfall, run-off in the bay kills parasites that feed on shrimp and crab larvae. This allows for a dramatic increase in the population of these two forage sources which in turn congregates gamefish seeking them. The long term effect of the run-off we are experiencing right now can only be positive. Look for more gulls to be working over schools of trout and reds this fall with the abundance of shrimp we should have.

One of the biggest misconceptions in saltwater fishing when working with fresh water run-off is that the fish can't see the bait. The truth is they don't have to see it, they can feel it. When sight is restricted other senses become keener. The water in the lake in the back of my house has never had more than about an inch of visibility and Ryan and Jay Ray have caught literally hundreds of bass out of it. Maybe the same one over and over but they still caught them.

It is true that sometimes we employ rattles in our plastic baits or use other lures that have noise making capabilities. This definitely has its time and place but I am still always amazed at the ability fish have to find a lure, and this brings us to another topic.

Scented lures were prevalent in bass fishing long before they made their way to us. Old timers used WD 40 on spoons and Bingos believing it added something extra. It very well could have but I never tried it.

Anise oil has long been used in many soft plastic baits. It smells like licorice to me and I like licorice so if the trout and reds don't eat them I guess I could. I ate my dogs beef jerky once without realizing that it was for the dog. It was a little stringy but tasty.

Many of the Bass Assassins are impregnated with B.A.N.G. scents from the factory. B.A.N.G. comes in pure garlic, shrimp, crab, anise and menhaden and can be added to non-scented lures. B.A.N.G. is formulated for slow dispersion in water, and when applied to your lures, is said to elicit a feeding response. Be careful to read the rules if you're fishing a tournament as some do not allow certain types of scent attractants. I put scent on my lures occasionally but not on a daily basis. I personally like both the anise and garlic versions of B.A.N.G. products. Then of course there is Berkley's GULP, which is pretty darn close to natural bait, and I have certainly used it as a last ditch to get stubborn fish to eat.

I have a tackle room with over 25 rods along an entire wall. I have never caught my dog on a Corky, Bass Assassin or Spoon. Leave GULP on a jig and I'll be extracting the hook from Roxy's mouth if I leave the door open. Think about that!

So I hope I have given you a bit of insight on fishing in bays where fresh water run-off from time to time affects water clarity. Mentally, it affects fishermen way more than it impacts the fish. Redfish thrive in the brackish fresh stuff but trout fishermen often overlook some of their best big trout haunts when fresh water arrives. Maybe after reading this article you will give those areas a better effort the next time you feel that fresh water run-off has ruined your chances.

Loyal readers and followers know that I do not shy away from dirty stuff nor am I deterred by fresh water when it arrives. Confidence in my fishing ability is one thing I am not short on. Neither are my boys, and believe me, that is a good thing in the fishing world as well as the job world. The next time you find yourself looking at day-old iced tea-looking water, think positive. Do your thing and let the fish do theirs. I'm betting you will find one another.