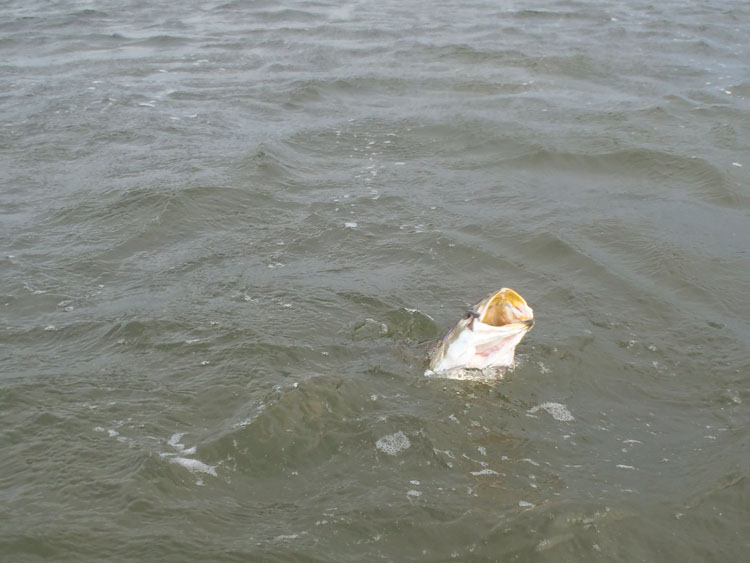 Very nice trout caught on the “dirty side” of a water change.

The so-called dog days are in my opinion the toughest time of year to consistently catch quality trout. It's just downright hot and fish activity is diminished during the daylight hours. I believe this to be true based on predawn wades when my best trout were caught up shallow, but as the sun rises this bite plays out very quickly. Smaller trout will often feed throughout the day but these are not the fish we are after although they provide quality entertainment and offer skill honing opportunities. I see this with anglers of all ages and skill sets; they just enjoy catching, no matter the size. I should also mention that care should be taken when handling and releasing these smaller fish, after all they are the next generation. With this said, what's the game plan for staying on better-than-average trout when water temperatures top the 85 mark?

Leaving the dock at first light or even in the dark is a given. Slightly cooler overnight water temperatures will provide a reason for fish to pull up shallow and feed under the cover of darkness, which can lead to them still being shallow and easier to catch just as the sun rises. I personally do not like running in the dark if I can avoid it - too many people blazing the shorelines with their face glued to the GPS and that screen does not show other boats, wade fishermen, a channel marker pushed down by a barge or a gator lying quietly in the shallows. All can and will, if encountered, ruin your day and maybe your life or that of another. Better I think to leave when we have some visibility, still using my GPS, and making our way safely to the fishing grounds.

I choose my August areas based on proper bottom structure for the season plenty of bait presence, moving water, and quick deep-water access. There are literally hundreds of areas in and around the Aransas Bay complex that meet these criteria. Many are so obvious that most anglers never even give them consideration.

I had a funny thing happen a few years back. We pulled up to an area that was very close to a new housing development. Immediately we started catching fish very good fish. After a while one of the guys commented that he could not believe the fish would be in the area, with so many houses going up on the shoreline. I asked if he thought they knew the homes were there and, if so, how? There were no piers or dock facilities nor were there roads running along the shoreline. He looked dumbfounded as I went on to say they don't stick their heads up out of the water and decide the area is no longer a good place for them to live. He paused for a second and we all broke out laughing.

Fish live where structure is plentiful, water quality is good, and food is abundant. It's that simple!

Watch a Bass Masters Classic. These guys are sometimes fishing under someone's floating dock or boat house. Structure, food, shade and access to deeper water everything a fish needs and wants in a confined area. There's a lesson for you.

So, find an area that has the right stuff and then get out and give it a chance. For the record, a chance is not 15 or 20 minutes. It's a full solunar feeding period for that specific day. You have to allow an area sufficient time to develop before you will know what it is truly capable of producing.

During August, I like to find probable nighttime feeding areas along shorelines holding tons of baitfish. Many times all we see are large mullet milling about but there will also be some of suitable size in the mix. I think this is why bigger trout and redfish like to cruise under bait schools. In our clear waters we have the luxury of being able to see such things, and knowing this enables us to transfer what we learn to other bay systems where clear water is not so prevalent.

Next is heavy bottom grass near the shoreline and becoming scattered and sparse farther away from shore, usually toward a pronounced drop-off. This edge, where the grass plays out, forms a fairly defined line, the deeper side of which is usually sand and sometimes mud. With bottom grass less prevalent, current from tide and/or wind will form water changes that begin at the edge of the grass. Water changes are probably my absolute favorite summertime structures, when I can find them. True, the winds are calmest in summer, so wind-created changes do not occur as often as in other seasons.

A definite positive in the water change equation are the numbers of menhaden that typically seek refuge within the "safety" of the water change. Menhaden prefer deeper water than mullet anyway, and water changes typically occur along drop-offs, so it's a good marriage.

Water changes bring bait and game fish together. By positioning yourself just within the water change zone and then wading or drifting a course that follows it, you can cast at slight angles to the wind (and current) and often find the best fish your bay has to offer.

I see it on a consistent basis, anglers running past areas of water change with preferred bottom structure and bait visible, sometimes even with slicks popping. They'll run several hundred yards down the shoreline to a patch of clear-green water. Folks, we do need clear water to catch fish. Menhaden do not lollygag at the surface as mullet do, they stay deeper. You will often not even know they're present until a predator puts them to flight and you will likely miss this from a distance, running on plane.

If the trout fail you, summer's heat also affects redfish and creates patterns that can be easy to target. I like two things to fall into place. I want the water temperatures to rise throughout the morning and the tides to fall. This pulls shoreline and flats redfish to the deeper drop-offs as the day progresses. More simply put it concentrates them.

In August the reds will begin to gather in age classes with upper-slot fish schooling together before making their spawning migration to the gulf in early fall. The majority of these do not return. I guess there are always a few that do not receive the memo but for the most part the upper-slot individuals leave and do not return. The midday to afternoon hours can produce fantastic fishing along drop-offs and deeper pockets of water on our flats. I have always called upper-slot reds day-savers because they so often take up the slack when quality trout boycott our efforts.

Stay hydrated in this heat and look for areas with less boat traffic that hold the right combination of depth, structure and bait. I think what I enjoy most today is fishing in areas that many believe to be void of fish or have too much pressure. To me, there is a sense of accomplishment in working outside the box. You never know, you may well discover a fishing area that no one else even knows exists imagine that!