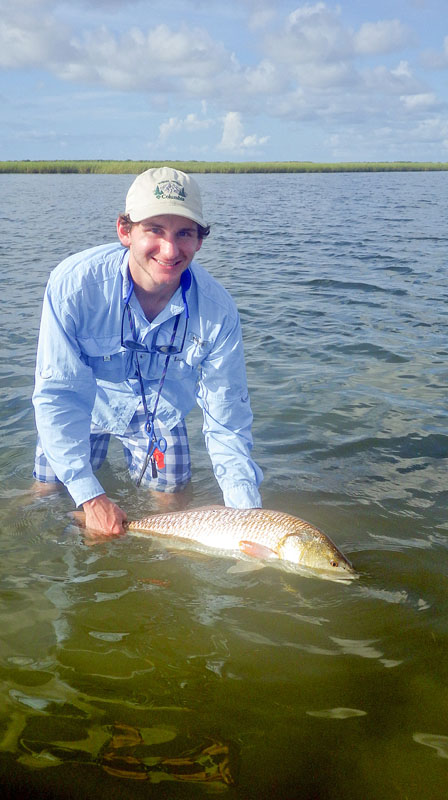 Mathew Schmidt with upper-slot redfish working the nighttime feeding pattern; CPR!
I have discussed nighttime feeding areas in the past and how we approach trying to catch the fish that feed there at night, during daylight hours. I have even more confidence today than I did a few years ago because I continue to work on tweaking my knowledge of such areas. Just for the record, nighttime feeding areas are inhabited by all species of game fish, not just trout. I am most interested in trout but reds and flounder can most certainly be caught while waiting for that extra special trout.

So, what qualifies as a nighttime feeding area? I think shallow water lying close to deep water is the first thing to look for. Of course there also needs to be attractive bottom structure, maybe more than one type. Slightly uneven bottom contours with scattered shell and grass are some of the best. Ambush points are important to predators. Structure breaks up the predator's silhouette, like spots or stripes on a cat, and trout are the true cats of the flats, spots and all.

Next we need a reliable forage supply, in other words bait schools that have setup in an area and continue to hold for long periods of time. Bait can fall off the flat with daytime heating but as long as it returns with some consistency the predators will remain in the area.

Next I like to have good water movement, created either by tide or wind. Water movement during morning hours is critical.

Some believe that all barrier island shorelines and their back lakes would have nighttime feeding potential. The honest truth is that not all shorelines and backwaters are created equal. Over a lifetime of wading along Traylor Island I know that while it may very well all look the same, it is not. What makes certain spots sweeter than others is what I continue to try and learn. Nighttime feeding areas are the same. Although Matagorda Island might seem very similar along its length, it too has sweet spots. Most common are the mouths of the many drains and second has to be the slight drop-offs lying just offshore of the drains.

Run your boat right up to the mouth of the drain and you're probably not going to experience the best the area has to offer. I like to park at least 100 to 150 yards from the area where I believe the bites will come. On weekends you might want to start a little closer to avoid being cut off.

Yesterday I had three guys standing in a classic Watkins line, all with fish on, when a boat came within 30 yards of my outside angler. It then turned and ran within 15 yards of my boat that was sitting on the Power-Pole. The driver then swerved sharply and preceded to run hard aground. Slicks popped all along the drop-off confirming that the fish we hoped would be holding there were indeed present. (Trout often burp up slicks when spooked.) We did not catch them, and even though it was a frustrating experience, we learned from it all the same. Never said a word to the guys that ruined the morning as doing so would not have changed what happened.

I like to position my anglers offshore and at angles to the shoreline. I want everyone to take a position in the line that allows them to first cast at slight angles to the wind and second on a slightly different line than the angler next to them. Give yourself 15 or more yards of spacing. I know it seems close but aim small miss small. There is usually a very distinct bait line in the pre-dawn hours. I guess safety is in numbers so the bait bunches up and travels in strings along a seemingly invisible line.

Game fish position themselves along the bait lines and many times the bigger trout will simply get in the line with the bigger mullet, using them as live camouflage. I can't tell you how many large trout I have tricked with a smaller offering when I find them cruising with their dinner. Bites will come fast and the fish's sizes will be varied, early on. In the hotter months small fish can dominate the early feed but do not be tricked into leaving. Puppies are eager eaters and often over-eat to the point of making themselves sick. Momma dog eats when she is ready.

You'll usually have a lull in the bite just after sunrise and many will think the deal is done, but hold tight and work slowly for another hour. The big fish are slowly exiting the feeding flat due to sunlight penetration and water temperature rising. But they'll continue hunting during their exit and will fall for anything easy. I prefer smaller lures in these situations, especially ones I can dance quietly right on the tip of her nose.

Nighttime feeding areas become shallow, clear and hot during the day. They cool at night and this is one element that attracts both bait and game fish. Some of my biggest trout come during the mid-morning hours, actually as late as the noon hour on some occasions. If you're really paying attention you'll start to notice areas where mullet get active every time they cross the area. These are what I call hot zones and I believe big fish will hold there prior to finally dropping off.

Watch and listen to the birds as they work the area you're in. IF you're in the right area there should be some bird activity, even if it is limited. I find that gulls and terns become talkative when they start seeing food and I also believe they will shadow a big fish as it cruises the flat. The bird knows the big fish is too large to eat but they have evidently learned that big fish spook small forage to the surface. This is a classic sign that you're in the right area, especially when moonrise or moonset occurs mid-morning.

I study the solunar table religiously when working the nighttime feeding area pattern, as I believe these periods produce heightened activity. It is extremely important to fish out the morning when learning this pattern. You have to allow the pattern to fully develop if you're ever really going to gain the confidence needed to make the pattern produce consistently. Knowledge is also gained on days when you don't catch them. We have to lose a few in order to learn how to win consistently.

Now, what about those big trout that run up in shallow water over pure white sand flats or up on skinny windward shorelines, and stay there all day? I have seen it in Aransas Bay the past four to five years with more regularity. Can't get many of them to eat a lure but they are constantly there, and no matter how hot the water gets they do not want to come off.

Again, no science here, but my theory is that dolphins and boat traffic drive them up there. I would say at least 20% of the trout I catch in Aransas Bay show signs of escaping a close encounter with a dolphin. Boats running all day, every day on the shoreline is another issue but that is another article. Just because the boat will run there does not mean it should. Hey, I am guilty of having been up there too, but trying to force myself to be more considerate and hoping others will follow.

First cold front should be here within 30 days and I am certainly ready for a cool down.