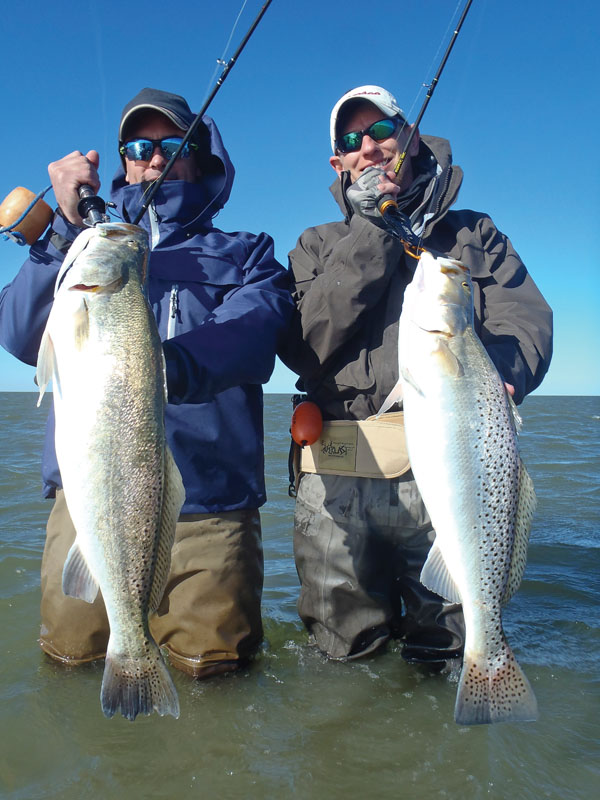 Not sure who might have said this first but I certainly believe it to be true. This month's Ask the Pro is actually me asking you: Do you respect and recognize those in your life that have assisted you in your journey?

I've always felt that life is a lot like a race. Some sprint to the front and lead for a while but as the race continues those who maintain a good pace with keen awareness of what it takes to finish are most often the winners. For all the old salts out there I say, finish the race. You have earned the right to break the tape.

As February drew to a close the air and water temperatures rose to springtime versus late-winter. Winter was very good to us in the Lower Laguna with several lifetime-bests for clients, for Jay Ray, and also myself. Two of these fish, Jay Ray's and mine, with witnesses present, were over 11-pounds. It's kind of spooky to think maybe the Man Upstairs is filling my bucket list as my race continues and I am relishing every moment.

Huge moment standing there next to Jay Ray as he landed our second 32-inch 11-pound trout of the winter season. We were lucky to find a pod of exceptionally long and fat fish during a window when they were willing to be caught. Very special for Ol' Dad.

With all this happening, one blustery morning over coffee, I noticed J.D. Whitley motoring out of the harbor alone. He is 75 and I wish these old salts would not go it alone but, alone is what he wants. An upwelling of emotion found my eyes as I realized he is still in the race.

A few days later I had opportunity to speak with J.D., longtime Port Mansfield fishing guide. I wanted to use the word legendary but he said to save it for after he's gone. My thoughts are that men like J.D. need to know these things prior to leaving us. See there–I honored his wishes but still got my compliment in.

I believe many of our old salts have a wealth of knowledge for us to gain if we will just listen. Attentive listening is a good show of respect, by the way. I definitely have a soft spot for the older gentlemen in my business and this probably stems from losing my dad at such a pivotal point in my life.

My dad was a high school coach and teacher with a master's degree in biology. My boys never knew him but he was a true steward of the outdoors. He loved everything about competitive sports and everything that lived in the wild. I find this true of most of the older salts I have come to know. Commercial fishermen also qualify, some of the saltiest of old salts. They too respect the resources and have valuable knowledge to share if we will listen.

My reasons behind this story are simple. We need to listen, give credit to those that teach us, and respect them for who they are and what they have achieved. Thirty years ago there were no cell phones, Facebook, Instagram or Twitter. No GPS or Man Overboard to take us back to the X. No instant success via somebody's tweet; you learned on your own by trial and error. It's still my opinion that this is the best way. I have said many times that I have been taught by some of the very best in the industry. I also want to say that sons, Jay Ray and Ryan, have taught me a lot. I would not have been as successful in this business if not for all my teachers.

Danny Adams; ex-commercial fisherman still guiding at 70-something, showed me the ropes in Rockport's back bays. My first trip with Danny began with him hitting his Mercury with a hammer to get it to crank. Really! No depth finder, no GPS, no cell phone for networking. Just a nose for what looked right, a wooden push pole to feel bottom, and a finely-tuned awareness of bottom structure in our bay system. Our styles of fishing were different and maybe even our approach to the business but I listened and learned and then applied his teachings to my own methods.

Cliff Webb; trophy trout guru of Baffin Bay. My first encounter with Cliff was unforgettable. Never met many people with passion and willingness to do whatever it takes to catch big trout as Cliff. And- I've not been around many guides that get the respect he does just by walking in the room. Cliff showed me a trolling motor trick that I have used to find many of the largest big-trout concentrations of my career. Understand that twenty-five years ago the trolling motor was not commonly used in Texas shallow water fishing, you could almost say he was a pioneer. One cold-foggy morning Cliff educated me on the difference between a trout push and a redfish wake. Huge difference once you've had opportunity to actually see a 30-plus trout push away in dim early-morning light. I still use this tactic and it has certainly put me in the right spot many times. To Cliff Webb, still a true master, I am forever thankful.

David Rowsey; an honest-to-goodness stud of a fishermen. Great guide, superb tournament angler and even better person. David and I share more than fishing, it's our belief that we play a bigger role in life but use fishing to get the messages across. David is a young guy with an old man's reasoning and sensibility and I mean that as a great compliment. David taught me approach methods when fishing areas with large trout present. "Never hurry and control everything you can control when in water where you believe super fish to live," is David's way. He and I control our wading lines in similar fashion, stopping with every bite or hook-up, and totally grinding in what we feel are the right zones. With increasing fishing pressure the pursuit of lifetime-best trout is tougher than ever but that's another story. Many thanks, David, for the fishing advice and times spent together.

Billy Sheka; now there's a name that resonates. I never fished with Billy but have talked over the years with him on many occasions. I wanted him to know that he has always been someone that I felt really understood the fishery in the Baffin Bay area and one of the best of the best. Whatever Billy did he always did it wide open.

Lowell Odom; I learned tons from Lowell, mostly about not caring what people thought at weigh-in during our tournament partner days. He'd win one then I would win but it never seemed to matter to him who won. Maybe I was overly-selfish, if I couldn't win I fretted over at least making a strong showing. Lowell saw it differently. "People only remember who won first place because nothing else really matters," he would say. Lowell also taught me that you can't win with non-winning fish, nor can you catch another man's fish. I currently enjoy our occasional fishing trips and the fun we are having with his and wife Dee Dee's Custom Corkys business.

Tricia Whitley has become one of my most recent educators. To me, Tricia has earned her spot as one of the best guides on the Texas coast. She has a very good working knowledge of the Lower Laguna and the dynamics that make it what it is. Her dad, J.D., turned her loose when she first started guiding and forced her to learn the hard way. Zero help from him. I bet if truth be known this was one of the toughest things he's ever done. Tricia has a natural instinct that puts her in the right area even when she can't put her finger on exactly what it is that attracted her. As a visiting guide to Port Mansfield she has helped me on the water many times. Mostly with a short text, phone call or maybe just hand gestures to let me know I am in the right area. Tricia definitely knows how to get it done and I have tremendous respect for what she has accomplished in this tough business.

Mike McBride; this guy certainly does it his way and wants you to get more out of your day on the water than meets the eye. Mike has taught me many subtleties of the trophy trout game, especially that timing is everything. "Being in the right place at the right time is huge," Mike says. There is nothing worse than being in the right place at the wrong time–and then tromping through and disturbing it for the next guy. Mike marches to his own drum (or harmonica) and even though I don't totally understand some of it I respect it. I caught one of my best fish with McTrout a few years back on a cold late-afternoon moonrise minor. Mike is the solunar guru. Thanks for the memories that afternoon.

My fishing friends in the Galveston area have taught me plenty–Mickey Eastman, Blaine Friermood and James Plaag. I get to see structure and often my actual targets while they typically do not. Their knowledge of things unseen amazes me and I am ever thankful for them teaching me valuable pattern concepts that I later applied in my home waters. Mickey taught me what "perfect trout water" tasted like one day on Sabine Lake. Call his early-morning Outdoor Show on Houston 610 Radio and ask him.

Finally, and by no means last, my sons, Jay Ray and Ryan. Jay Ray has joined me in the business and Ryan is the bass master of the family. You guys have taught this old guy so much. Lately it's been about the energy with which you approach a day of fishing. I believe mostly you taught me about survival. You guys know what I'm talking about. Your youth and hungry-to-learn attitude inspire me to continue the race. You're the best two anglers I know and you consistently reaffirm this every time we get the chance to fish together. I love you and respect the men, husbands and fathers you have become. Pass it on boys, those around you will be better for it.

So what's my purpose in this? No, I'm not sick, not retiring, and certainly not pulling out of the race. The race, my race, and so many others in my business, is exactly what this piece is about. It's about respect for those that waded, drifted and poled before us. It's about doing it right. Giving credit where credit's due and about getting the most out of everything we do. It's about respect; something I fear is headed south in today's fishing culture.

For many of us older guides, our careers have been much like the race I describe. Not an all-out sprint but keeping pace has been critical. The course is long with many obstacles. What I suggest is that those who are deserving should be given the chance to finish the race with pride, and maybe even cheering them on. I will finish my race with wife Renee by my side, the grandchildren and clients. I hope that my boys will be holding the tape at the finish line. God will be the final judge and his kingdom is the prize. Still work to be done in that department as I fear I fall short quite often. Until then I will continue fishing, trying to learn, and trying to teach any who desire the knowledge.