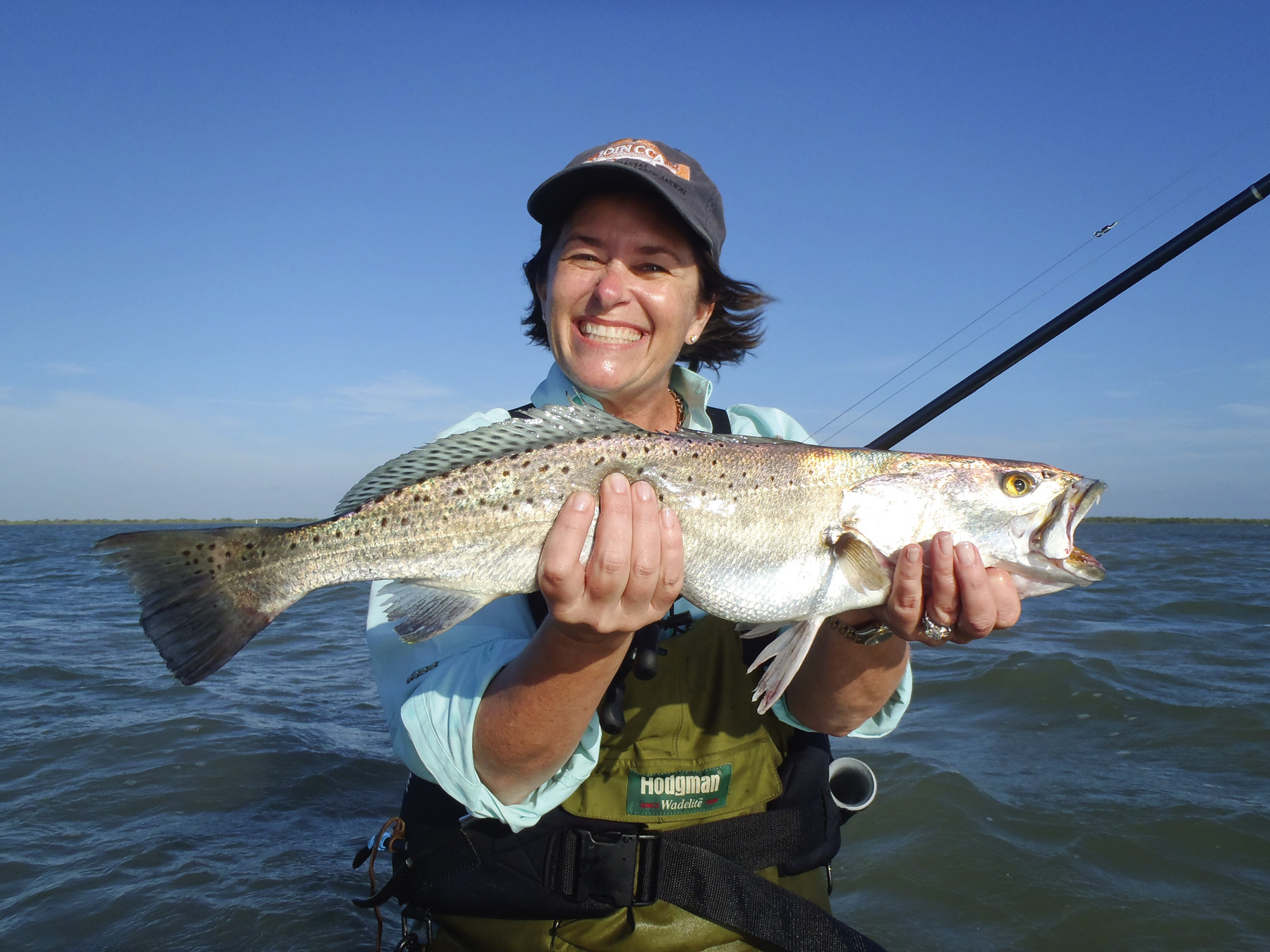 Ellen with very nice Carlos Bay winter trout. CPR!
With winter setting in I have settled into a comfortable fishing pattern. I have big trout on the brain from about Thanksgiving through May anyway but, during the coldest of times I settle in to doing everyday what I believe I do best. It's not fishing. It's the evaluation of the conditions for the day and these include my weather forecast, solunar feed periods, and especially the areas of the bay holding a consistent supply of bait close to a productive structure.
Many in the fishing world just want to know where to go, totally convinced that this is bit of information is all you need. My fishing club members would tell you that in eleven years I have never mentioned a GPS number. I don't believe in limiting my members to learning only a specific spot at a specific time. I want them to learn how to recognize what makes a spot good.

I start each morning with an area in mind that qualifies for providing me and my clients the best chances of fishing where the best fish will be. There are many factors that can change from one day to the next and each can affect the presence or the activity of the fish residing in the area. Minor drops in tide and/or water temperature absolutely cause me grief on a regular basis. Even though I know what the effects are, they still strain what I call my knowledge base and my confidence.

By this I simply mean that I go to an area knowing that today's conditions are different than my previous day but I want to reconfirm that my knowledge is still right. Most of the time I am right and I work past the area without ever mentioning to the folks onboard that this was my primary goal. I then revert to my original game plan, the one that matches the conditions of the day we are fishing.
Water temperature is a biggie in the winter. If you own a boat and fish in winter you need a water temperature gauge. Most GPS units are equipped with them today. Many years ago I developed wintertime patterns based on water temperature and bottom structure alone. Of course locating bait in winter has always been our primary task but the patterns were developed after fish were being caught in one are on a certain type of structure and then a move to similar areas provided poor results. What was different?

Eventually I discovered that it was slight differences in water temperature. I could not have known this had I not had the proper device on my boat to measure accurately. When water temperature and bottom structure matching the areas where I had previously found fish were located, we were rewarded with similar results. Planning each day now leads to going through the same thought process, which has often times led me to locating fish in areas I normally would not have thought to fish. I learned that when water temperatures fell or increased the pattern also changed. One of the most significant things I learned about wintertime trout is that as water temperatures rise, the size of the fish usually goes in the opposite direction. Understand that I am talking about normal wintertime conditions here, not to be confused with a string of sub-freezing days followed by a sudden warming trend.

Fish acclimate to the cold and they do it rather quickly, so the theory of cold water causing lethargic fish can be pretty much tossed overboard. I do find however that trout slow down somewhat once the water temperature drops below 52 and naturally this is the mark where I begin to slow my presentations. Let me also say my best-ever trout day started with water at 47 and 29 air temperature.

I wonder if Cliff Webb thinks back to that day as often as I do. It was the day following a major arctic front and not a single boat on the entire bay. We were both very much in our prime and the fishing was just unbelievable. I have a three fish stringer mount in my office and it's good that I ran out of money for taxidermist John Glenn or there would have been more. The trout were so large that I swore they were oversize reds when I hooked them.

My entire body ached all day but Cliff's confidence that the big fish were there and would eventually eat for us somehow warmed the soul. Cliff knew the water temperature was bumping between 47 and 52 degrees, and when the midday sun warmed the shallow water inside the dropoff they came alive. The mullet showed first and became increasingly active as the water warmed.Then came the trout. As the moon started to rise, the trout began to feed and the rest is in the history books.

Cliff understood the pattern and long years of suffering in like conditions instilled the confidence necessary to take advantage of it. There is simply no other way to obtain this type of knowledge, and on that day he passed it to me. Water temperature, structure and bait all came together as he had seen many times before and it happened exactly where he had us. Luck? I don't think so.

I plan my days based on established patterns and conditions. Good feeds tend to string together during winter with predictable daytime warming, and I cannot stress enough the importance of the solunar table. I prefer the minor periods of moon rising and setting. Major feeding periods are of course good too, and they're longer, but the shorter minor in my opinion concentrates the more aggressive feeding. This is especially true when good concentrations of fish have been located and water is being stirred by moderate wind. The wind not only aids in stacking bait but it also adds the color of stirred sediment to the too often, too-clear shallows. Perfect camouflage for prey and predator alike.

When we are able to put all these together we can have shots at the best of the best. I had this happen last Saturday. We waited almost four hours on a moonrise minor scheduled to go at 12:35 PM before penetrating the active zone. From 12:30 to almost 2:00 we caught trout from 20 to 25 inches in an area that up until then showed all the signs of being a great spot except trout! Patience and persistence wins the day.

With the passage of each front and the warming trends to follow; your pattern will change. You have to be able to record the changes and relocate to areas that are productive. To me, this is what makes fishing so exciting and this is also what makes it so rewarding. Honestly, it's hardly ever luck, no matter what anybody says.

So there you have it, a winter game plan. All that is left to do is execute and that's where you come in.