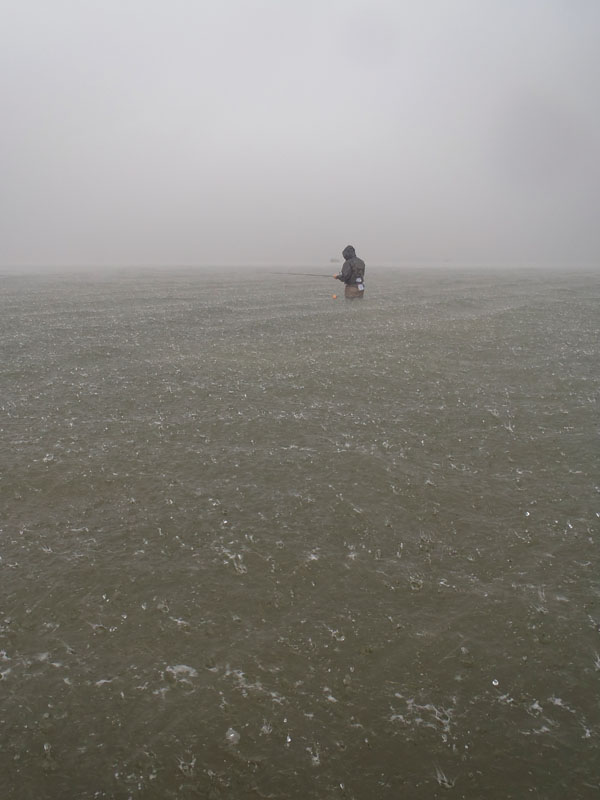 Frontal approach and moonrise minor met head-on. The rain was miserable but the fishing was incredible.

It's been many years since I have been this excited about our middle-coast fishery. I spoke of this last month, believing it was then about as good as it was going to get. Well, it's even better now, with water temps in the mid-60s. I believe it will get even better as it gets colder. I have always been an optimist; a half cup is half full. This attitude has kept me going on and off the water my entire life and I like to think I may have passed this attitude along to some throughout the journey. Hopefully after reading this article you'll be so fired up that you'll jump in your boat and get out there and get ya some.

If you have been to the coast recently you probably noticed that tides have been exceptionally high. The fall equinox begins the cycle but within a few weeks the tides generally subside to more normal highs and lows. As fall progresses into early-winter and fronts become more frequent, the tides steadily decline and the lowest of the year occur in late-January and early-February. However, with abundant El Nino rainfall along with a rather late Pacific Hurricane Patricia that dumped even more rain over the middle and lower coast, the tides have remained unseasonably high for weeks.

This abundance of fresh run-off and the flow through Cedar Bayou has literally supercharged our fishery. I have mentioned in previous articles; shrimp and crab populations have exploded. It has been at least twenty years since I've seen blue crabs hanging onto our lures or seen as many in the shallows of Aransas Bay. Menhaden also had a banner year, so food for gamefish is very plentiful. My take on this is that improved circulation through Cedar Bayou and relief from drought has produced bumper crops. Just so you know, my beliefs are based on observation, not science. Fishing is what I know and do, I will leave the science to the biologist.

So with tides high and baitfish scattered, it is time to consider patterns that are not always staples in my neck of the woods. Everyone is aware that I like wind and windward structure, no matter what bay I am fishing. I like them because the fish like them and what they like I like. The majority of our back-lakes are heavily laden with bottom grass this year, (thanks to the rain) and this proliferation of grass has overgrown many of the potholes. Consequently, many anglers are passing on the lakes believing that gamefish have fewer ambush points and will have vacated in search of easier hunting.

I prefer backwater lakes that contain areas of broken bottom; targets for me to cast to and areas for gamefish to setup and ambush bait. When I can find this type of setup along a windward lake shoreline or along the edges of the drains that feed these lakes, my confidence automatically soars. This is a familiar pattern to most anglers as it relates equally to main bay shorelines and also large expanses of shallow coastal flats. It has been shoved down their throats for years, by me mostly.

Right now I am concentrating my efforts on a large number of lakes from northern San Jose Island all the way to South Pass in San Antonio Bay. Since the tides have been exceptionally high for so long, many of the upper slot trout have taken to spending most of the day in these areas, cruising along windward shores eating mostly pinfish, mullet and shrimp. Trout eat crabs as well and love them when they are molting. Who doesn't like soft shell crabs, right?

This pattern has been utilized extensively in northern San Antonio Bay and up into West and East Matagorda Bays because the lakes there are slightly deeper on the average than in my home waters. The lake shorelines here offer shorter ranges for feeding versus the outside shorelines where we typically believe we should be fishing. I think, (again, no science) that the back-lake serves as a somewhat smaller food court for them. They cruise out of traffic in water deeper now due to tide levels above the norm. A higher degree of stealth mode can be deployed and more efficient feeding occurs. Big fish are all about easy, so the older I get the more I like chasing the bigger ones.

I try to position myself and my anglers as far OFF that invisible structure line (where they cruise along the shoreline) as I can, wanting the fish to feel comfortable in our presence. Be aware that the invisible line changes with the contour of the shoreline. One has to be constantly aware of points, pockets and the water depth changing. All of these are barely noticeable to us but not to the fish. For the past several weeks I have found myself spending my entire day in a single lake, fishing the windward shorelines (when the winds allow) and working the drains where they enter the lake. This works more consistently for me than working the drain on the bay side where tidal currents control the bite.

Bait presence decreases with the passage of each cold front, causing gamefish to feed opportunistically whenever food is available. This definitely swings the catching pendulum in the anglers favor. This seasonal phenomenon is likely the reason why so many anglers spend so much time on the water this time of year.

Another observation this year is the length to which the widgeon grass has grown in many places. If you fish carefully you will notice that these tall stands of widgeon grass amid carpets of shorter shoal grass can be fished the same as the potholes that are presently absent. Makes perfect sense to me that the different lengths of grass are creating structural differences along the bottom, and these are the new ambush points. Another thing to remember is that trout and reds alike will seek the cover of the higher grass when water is clear and atmospheric pressure high, very common a day or two after a major cold front.

Finally got the fish up to us with video running and me snapping cell phone photos with my free hand. Those fish twisted and thrashed and ripped the snap ring and front hook completely off the bait. We looked in amazement as she slowly eased off into the clear but dark water. She had won and in my heart I was glad. Great fish do not deserve to be landed that way. I used the photo in this article so you could see her. I think she was 28-plus, so she'll really be special in another year or two.

Knowing where the best fish are holding is no guarantee you'll catch them. With that said, I recommend trying to time your arrival to a prime spot the day before a front and, of course, during solunar feeding periods. One day this week we had a moonrise minor that coincided with the arrival of a fairly strong front that brought high wind and heavy rain. For about 45 minutes the fishing could not have gotten much better. As soon as the front line moved through and the rain stopped, the bite ceased as well. We were at the proper place at the perfect time.

Try making your own luck with good planning and the proper use of all the tools we have available to us. We have all heard the saying, "I'd rather be lucky than good." Not me, luck runs out!