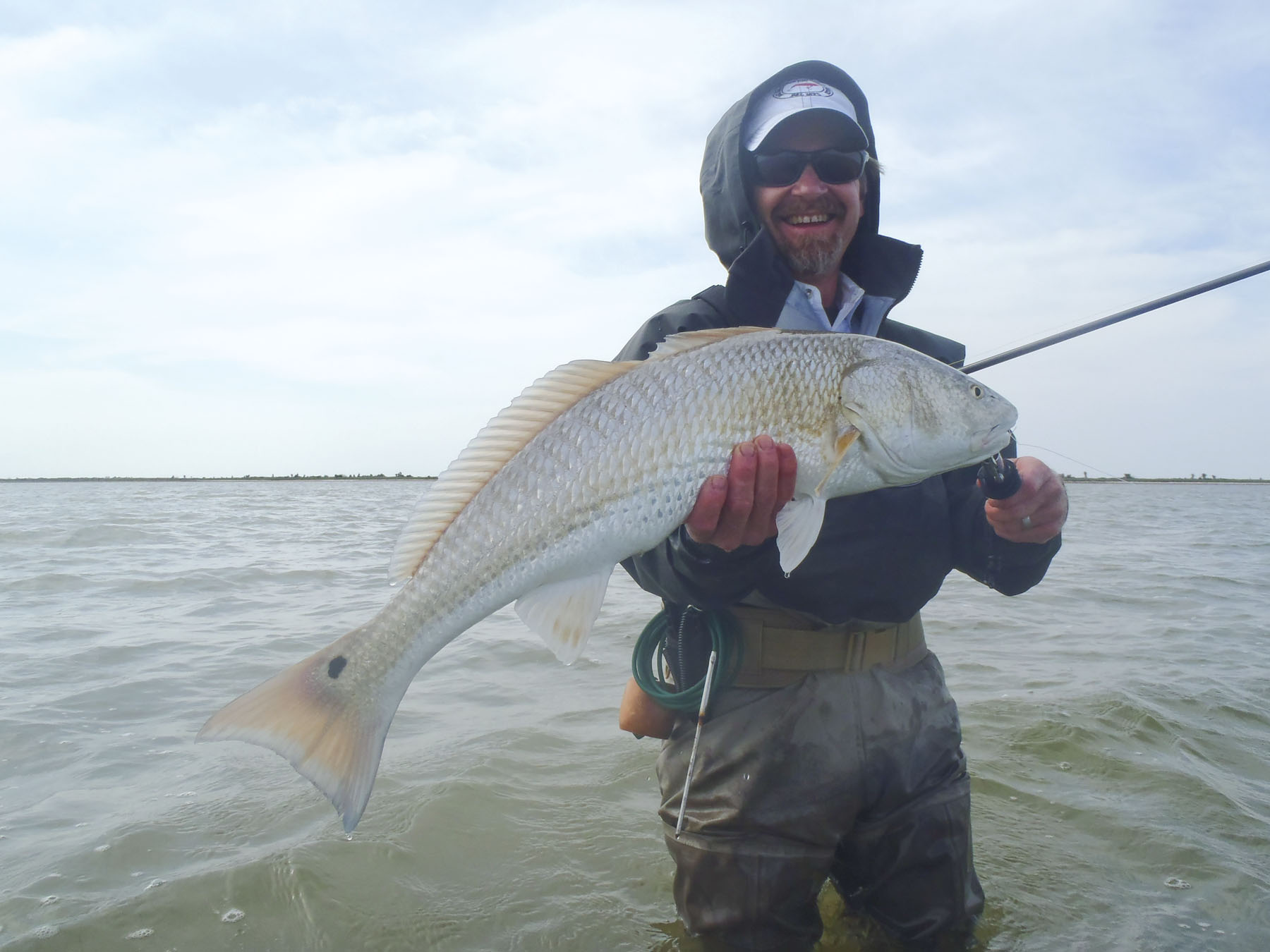 John Massengale with huge red while searching for trout.
I have not always been as big a believer as I am today on the importance of staying put when trout of the size you're looking for have been located.

Over the winter months we have the good fortune many times to find larger than normal concentrations of upper slot fish. Depending on your location along the coast, bottom structures that hold bigger fish change. In the Rockport area we have a variety of structure types and this is good and bad. Good that we have choices and bad that the trout have the same. Upper slot fish are hard enough to pattern when presented with just a couple of bottom structure variations, much less multiple ones. I personally prefer areas of predominate sand or soft mud with scattered grass beds. A few oyster shells scattered in the mix is a bonus for sure but I am good with just grass beds. These types of areas actually concentrate the numbers of trout better than areas covered solid with grass where scattered potholes are the structure. True that the potholes become the primary targets but the grass surrounding the potholes can give your trout a vast hideaway during times of non-feeding activity.

I like warming trends after severe cold. Trout and baitfish alike seek out the fast-warming shallows where this structure is present. Water needs to be deep enough for sunlight to penetrate and promote and sustain growth for grass but deep enough to hold some heat and survive the feeding of our winter resident waterfowl. Hey, a thousand ducks can put a hurt on the grass if it is shallow enough for them to wade around in and pull from the bottom. The grass beds present in areas that trout seek to warm gives them ambush points for stalking as well as it provides for cover for the bait fish they seek. Some telltale signs that fish may be present are from the obvious to maybe the not so obvious. You have heard just about every angler you have ever heard speak on the subject, about the importance of food, mullet primarily. It's true that I have difficulty staying firmly planted on a flat with the perfect structure on the seemingly perfect day if there is no bait present. I don't have to see it jumping or flipping, a push or a surface swirl will suffice. I will however gain staying power when seeing brown pelicans or an osprey continuing to survey the shallows. If only I could have a set of those eyes for a few hours each day. I use these fishfinders no matter where I fish along the Middle to Lower Texas coast. Few times have they not led me in the right direction. I don't always catch the fish that mix in amongst the bait but I know they are present.

Knowing they are present - Now here is where experience, confidence and a trusting inner-self come into play. Fortunate am I to have been raised on a shallow, relatively clear bay system. This has allowed me the luxury of actually laying my eyes on what often lies beneath the bait in the areas I frequently fish. In past years my buddies and I, James Fox and Ronny Barker, would see very large trout during air boat rides to and from the duck blinds we hunted our clients in. Always amazed me how shallow these beasts would be even when air and water temperatures would have suggested a deepwater residence would have been more suitable. It was no surprise when the 1983 freeze killed almost 82% of the trout population along the Middle and Lower Texas Coast. They died where they lived. Truthfully I had caught only a few of them back in those days, even though I knew where they lived.

A serious quest for knowledge to catch more of them has led me to where I am today. Still know where they live but still not knowing very much about the total causes of their comings or goings. We know the moon plays a big role as do water movements and temperatures along with salinity and a consistent food source. Simple truth is they sometimes go off the grid and we can't find or catch them. I positively know that I will never catch another one if I do not continue the educational process. Over several stiff drinks a few weeks back Mike McBride and I shared our thoughts after a very tough run of not catching but seeing. Truth is we just don't know why they do what they do at times. Anyone that says they do, well I'll be nice and just say they're better than me.

What I do understand and what works for me, is knowing when to stay put. One day a few weeks ago a couple of great clients of mine exhibited such skills. Chris Thompson and Brett have fished on and off with me for years. Both are good fishermen and certainly don't need much from me but I think they enjoy the confirmation that what I think they think is true once in a while.

We had an area that held some scattered grass beds over a not too terrible soft bottom but just enough squish to make it right. Winds were dead calm early and slow wading around the edges of the grass beds yielded little action. Large wakes could be seen as we motored out of the area. Plans were made to return when the winds increased and the moon rise minor was happening around 2:00pm. After several nonproductive wades in other area the winds increased, we made the move back to the first area. Idling to a stop at least 100 yards away from the targeted, area mullet could be seen flipping and jumping all around. Big change from earlier where mullet were present but not doing much except trying to get out of our way. Sun was high enough to make out the submerged grass despite some sanding that was occurring due to the wind. Soft bottom muds up quickly.

I immediately stuck a couple of 4 to 5 pound fish on the first small areas of grass I could reach, then it was Brett Nedry with a nice 24 inch trout and all the while Chris was standing in the same place. He nodded that a bite had been detected but missed. Long and short of the story is that even though both Brett and I moved slowly around the outsides of the grass beds and caught numerous trout in the 5 to 6 pound class, Chris caught and released 17 fish off a very small area of two to three grass beds. Not all were trout and not all big fish, but he did have one over 6 pounds and another almost 5 pounds. His knowledge, confidence and patience to hold created a day I think he will long remember. In the hours we spent in the area we released at least 25 trout and probably that many red fish. A few larger trout were lost but that, after all, is the ingredient that keeps us returning to the scene time after time with the hopes of landing that personal best.

So it's OK to admit that we don't know sometimes. It is not acceptable however to quit trying to learn. I hope this spring season brings you some great opportunities to learn.

May your fishing always be catching. -Guide, Jay Watkins