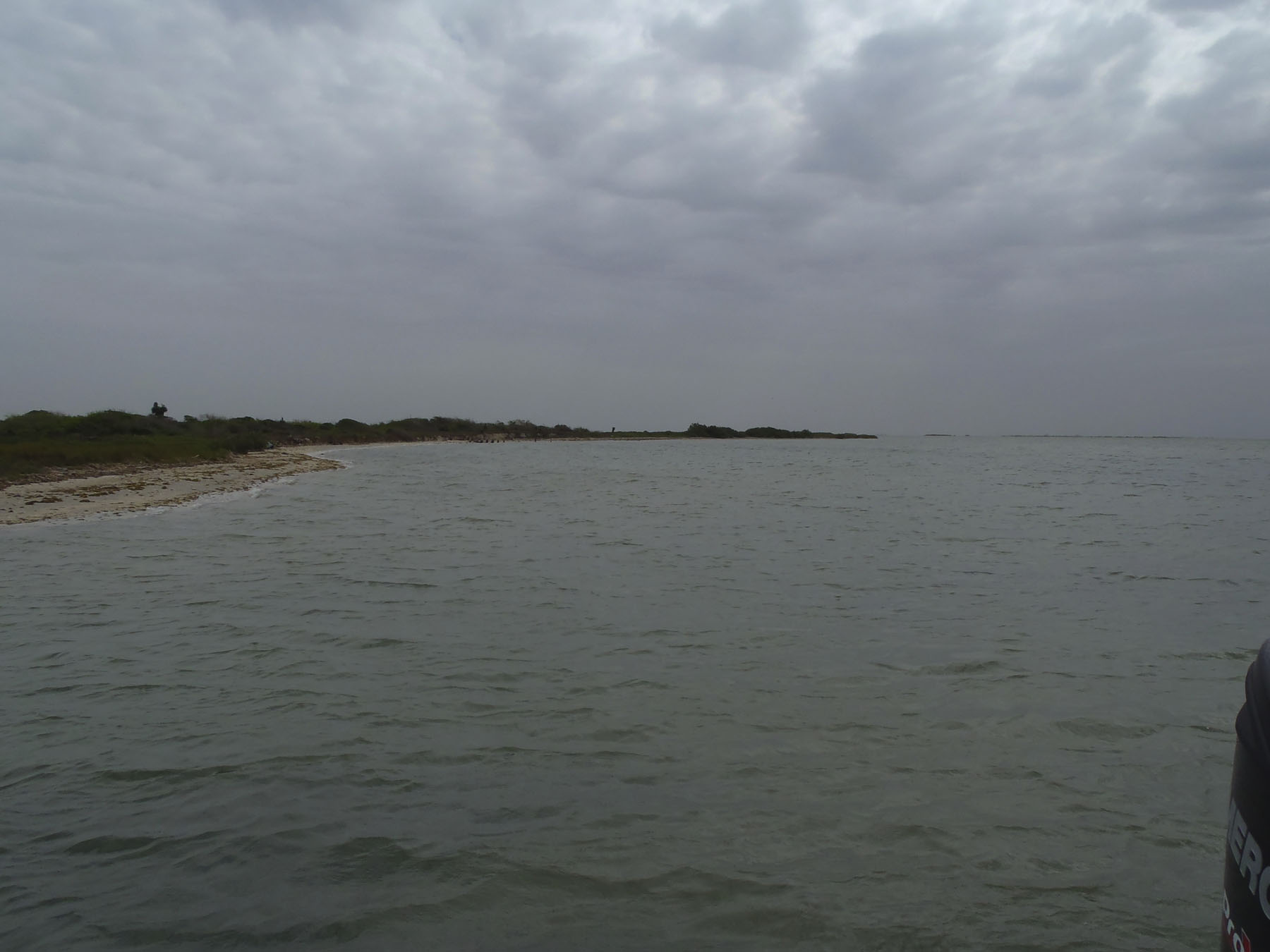 Small points like the one in the foreground should never be overlooked.
It is April 30 and still many areas along barrier island shores in the Aransas/San Antonio bay systems have very limited seagrass growth. It's there, but growing ever-so slowly. This absence of traditional springtime structure has created tougher days due to our trout and redfish constantly moving and searching for cover necessary in the hunting game. This creates patterns I refer to as track meets. Unpredictable spring weather has added to the frustration.

I believe I have received more e-mails and phone calls this year than ever before. I associate this with a more active and knowledge-hungry fishing public. Hey, that is a good thing, I assure you. I have for many years been so blessed to have so many fishermen and women with a desire and need to know. I truly enjoy the teaching aspects of my days spent on the water, which are just about every one lately it seems.

Recently I got to spend two full days fishing with my son Ryan. It's a treat to fish with the boys now days. Life for both of them is busy as it should be, especially for Ryan, now with a new baby girl to go with wife Brook and Brodie. One of the things I get the most enjoyment out of is Ryan and Jay Ray's competitive nature. The boys bring an element of intensity back into the game for me whenever we fish together.

Ryan being the bass fisherman in the family adds to the knowledge department for both me and Jay Ray. He is fish habitat and pattern orientated and able to adjust accordingly from day to day or hour to hour. This is an absolute necessity for any and all fisherman no matter whether one's preference is freshwater or salt. Ryan came down on a Thursday night prior to our first tournament of the season and planned on fishing with me on Friday with my charter to get back in the groove. Honestly, the boy has an A-Game that needs little tweaking but I agree that pre-fishing is always the best thing.

Conditions for my charter prior to our I.F.A. Redfish Series event on Saturday were less than favorable. Winds to 30-plus out of the NE on Friday with the arrival of yet another strong front allowed for few options, but with my experienced group we were able to slow wade along areas of shallow windblown shoreline and catch quite a few fish in spite of the conditions. With very little bottom grass we were keying on the presence of a food source; mullet, shrimp or crabs.

With emerging grassbeds out of the picture Ryan quickly picked up on casting to protruding points, no matter how slight some might have been. It was comical the way we jockeyed for position as each point was approached. Every point held a fish or two so it was not long before we conscientiously had to force a slowdown in our wade between them. For the remainder of the day we concentrated our efforts this way, capitalizing on the information we gained at each. I promise I am going somewhere with this so stick with me.

On our way to Port Aransas for the captain's meeting that afternoon our conversation centered on the weather forecast. The accuracy of weather forecasts on the coast is marginal at best in my opinion so I have learned to just wake up and assess the conditions at hand and fish them to the best of my ability. Conditions control the pattern and position the fish will use when they set up to feednot the forecast!

Ryan and I had two areas holding decent redfish, not necessarily what we would call guaranteed tournament winners but 7- to maybe 7-1/2 pounders. Both of these would require specific conditions to be productive. There are so many things that factor in this; lack of or light wind for bigger water, gusty winds for the shallows, and of course higher or lower tides.

As we climbed in the truck that morning and headed to the tournament I asked, "So what do you think?"
Ryan's reply was, "What would you do today with a charter if the guys wanted to catch upper-slot reds and could not wade?"

I thought for a few miles; out loud, that is how we do it. And then I said I would fish spoil islands in the Estes Flats-Redfish Bay area. Which by the way, this area was not at all in the original game plan nor was it an area that we had scouted recently. The area did possess the right setup for the wind and tidal conditions however, and that was enough for me.

With NE wind at 20- to 25 mph I would be able to drift and Power Pole down along the many points and potholes the area offers. My 23 Haynie Cat drifts quietly with drift chutes deployed from the stern and, with me being right-handed and Ryan a lefty up on the bow, a plan was quickly and confidently set.

Ryan was in from the get-go, explaining that he felt the fish would stack up in areas where potholes formed off spoil island points. The points create a windward setup and predators are all about facing into the wind-driven current.

First short drift down to an area where we wanted to drop the spike, Ryan sighted a fish he said we needed. He proceeded to catch it and it pushed the 8-pound mark on our Boga. Our confidence running high now, we immediately went into stealth mode, moving with our trolling motor from pothole to pothole and point to point. Bites came frequently from both trout and reds but the reds were only 4- to 5 pounders. Excellent fishingjust not the size we needed.

As the wind continued, overcast skies led to periods of light mist as well as a few short periods of just plain old rain. "Big fat stinging rain," as Forest Gump would have said. We laughed at how terrible out-of-state tournament directors must think the weather is along the middle Texas coast most of the time.

Around 10:00 Ryan stuck another fish that pushed the Boga to 7-plus so at that point we felt pretty good, only needing that one special fish to get atop the leader board. I am a firm believer in creating a positive mental environment and allowing it to carry you to a good place. Honestly, I believe we have this. I don't say it in a bragging way but in a way meant to allow you to understand the extent to which the mind game can influence the outcome when you're out there.

The day ended without that last big bite but our 16.49 was good enough for third. The scales were a bit generous, but not just for us. We were not disappointed as we know from years of competition that it usually takes 17-plus to win. Maybe June will be kinder, weather-wise and weight-wise.

So what did all that have to do with the tough fishing days we are experiencing right now?

It's about knowing what to do when things aren't what you need them to be. It's about acquiring the knowledge to succeed when others struggle. Mainly it's about elevating your game to a level where you have confidence to change game plans on a moment's notice with confidence that you've made the right decision.

Out there right now, it's all about the lack of seagrass and my stubbornness in believing I can make it happen anywayall the while overlooking the permanent structures (points and potholes) that provide suitable ambush points when others are absent. Knowing where to find fixed structures for all weather and tide conditions helps tremendously, and this knowledge is only gained through time on the water. Seminars, DVDs, reading this magazine and watching TV are excellent tools but, time spent actually seeing and doing is priceless.

I am now keying on scattered shell and points, both off the land or underwater, that can create some type of bottom structure until some other areas along our shorelines produce enough grass, and don't forget to factor in the Major and Minor feeding periods.

"I am not a smart man but I do know what the fish do!" Watkins this time, not Gump.

In closing I want to give a shout out to my very best friend and fellow Rockport guide, Tim Redden, who is fighting cancer. "It's game time; time to FIGHT!" You got that?