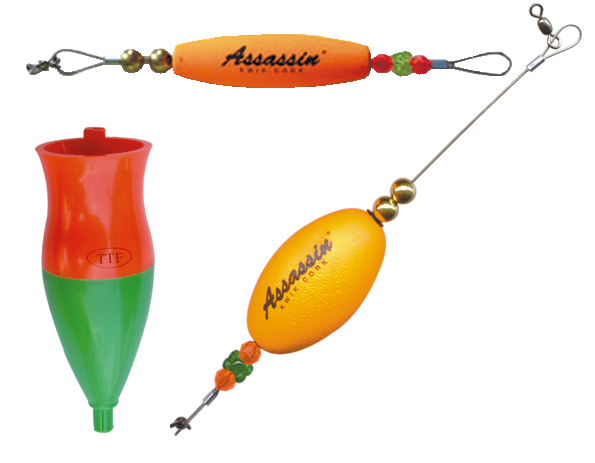 Dangling a soft plastic under a cork can be just the ticket for fish that will blow up on a topwater but won’t take it. Like a surface plug, the cork makes the noise and surface commotion to attract them. The soft plastic hanging in their face is often more than they can resist.

Why are there so many different noise-making devices placed in the lures we purchase today? Someone asks this question almost everyday; and it has become so common that I sometimes pose the question to my fishing clients before they even get the chance to ask it. The reason is simple; rattles work and we need higher or lower volumes of rattle for different weather and water conditions.

I along with many other well-known guides have been very fortunate to work with the L&S Bait Company over the years helping them develop their line of saltwater lures. L&S is better known to fishermen as the manufacturer of the famed Mirrrolure line. This company has deep roots in the saltwater lure business. I still have some of the original 51 MR series that we tested and all of my original Top Dogs.

The original Top Dog has spawned the Top Dog Jr., Top Pup, She Dog, Poppa Dog, He Dog and She Pup. There are also the suspending series; Catch 2000, Catch 2000 Jr. and the Catch 5 lures. The newest of the suspending twitch baits from L&S Mirrolure are the 19MR and the 17MR series. All of these lures contain noisemakers.

John Nemire of Nemire Lures is making one of the best rattling spoons on the market today. I have used these spoons in just about every fishery along the entire Gulf coast and found their noise-making ability to be very attractive to fish. The spoon can be fluttered along the bottom, creating sound and vibration, as well as that tell-tale "dust puff" whenever it touches a soft bottom that makes the bait look so realistic.

What all of these lures have in common are rattle chambers which create varying levels of noise. There are so many companies now making such a wide variety of noise-making lures that choosing one can be hard. My recommendation is to choose a lot of them.

Any serious saltwater angler should always have at his or her disposal a wide and varied arsenal of baits that make some type of noise. Every manufacturer has his own proprietary system which creates a little higher or lower pitched rattle. "Clack" is a better word when describing the noise some of these lures make. Whatever your choice, there is a time and place for each and every one.
Some of the noisemakers we use to catch fish are actually separate components of a system we put together ourselves. The rattling cork is a good example and has been a mainstay for bait anglers and lure enthusiasts alike for many years. Today we can find them in just about every size, shape and color that one could imagine. Rattling type corks are employed to add surface activity as well as noise. The combination of these two factors draws fish to the area where we have our bait.

The Mauler type cork has been a popular float rig for both bait and lures anglers along the middle and lower Texas coast for years. Sid Walsh gave me my first Mauler rig almost 20 years ago. The mauler had real glass beads and a heavy stainless steel wire to create a terrific sound, and through the quality of these components was a very durable product. Today Bass Assassin makes a fine cork of the Mauler style called a Kwik Cork. This product has a nickel titanium wire with beads that allows the angler to replace the cork if it should become damaged by feeding fish that are not on the line. Many are the times when one fish is hooked and the dragging cork is completely inhaled by yet another feeding fish in the school.

I prefer the cigar-shaped corks because they cast better with my lighter tackle. For years I used the Mauler rigs with great success but have gotten away from them for a while. We should never forget those tactics that once worked so well. There are so many lures we use to throw that caught fish, yet somehow we have managed to forget about them as others became available. So many lures, so little time.

On any given day, reaching back into time for the lures and rigs of yesterday may well make the difference between success and defeat. I saw friend and fellow fishing guide Cliff Webb catch a great fish on a mauler rig for us on a tough day a few years back in water that looked like a chocolate milkshake. It was his knowledge that put him in the area where the fish were, but it was the noise of the cork that brought the fish to the bait.

Again, many companies make rattling corks and Mauler-styled float rigs so you have lots of choices.

Likewise we should also remember that we can add noisemakers to our soft plastic lures as well. Rattle implants (worm rattles) are available in most all tackle stores and they can be found in a range of tones and volumes of noise they create. Some are made of glass, some are made of plastic, and some are made of aluminum. It is more work and cost for the angler, but that noise, no matter how slight, can be the difference between getting strike and not.

You notice that I have stated that noise CAN be the difference between strikes and no strikes. Noise at times, can also spook fish so the ability to observe and interpret the situation of the day is of extreme importance.

Now that we have mentioned some of the noisemakers available to us, let us talk a little about where and when one should use noise-making tactics. Right off the bat I think of off-colored water conditions. These conditions are typically accompanied by high winds; both high wind and dirty water would give us good reason to use a lure that makes some noise.

I like the 94-series Top Dog lures in the off-colored stuff and the chop if I am throwing top waters. Most of you know that topwater baits are not typically my go to bait on a year 'round basis but I do throw them during the cooler months of the year. The 94 series has a deeper clack and for me it works well under the above conditions. If it is downright dirty, almost chalky, I will choose the 83-series She Dog. Mirrolure calls these the High Pitch series. This bait is loud and offensive, but it works in the nasty stuff for me. For day in day out usage, the 84-series Top Dog Jr is hard to beat. It has a more subtle clack that seems work best for me most of the time. When I get real skinny and the water is clear and calm, the 74-series Top Pup is the better choice if we need to stay on top. The clack is a sharper yet lighter noise, which appears to spook less under these conditions.

When chunking suspending type plugs, I like the 22-series Catch 2000 Jr and the 5M-series Catch 5. We also do well with the Tsunami Big Boy and Corky rattling series baits. I employ these lures when fishing scattered mud/shell/grass, whenever there is a presence of LOTS of baitfish. I like to get the baits under the rafts of actual bait and the noise created by the lure draws the fish to it. When there are hundreds of choices we need not necessarily what imitates the baitfish the closest, but put something out there that is different and draw them to that. It could be that the difference is what the predator singles out.

For shallow, calm, clear stuff with little structure, I believe we have to go small and away from clacks and over to clicks. The smaller 19-series Mirrominnow and 17-series Mirrodine can achieve this desired noise along with a smaller meal offering. NEVER think that big trout and big reds only eat big bait. I believe the current State Record spotted sea trout and a documented 15-pound class fish were both caught on baits 4 inches or less in length!
When fishing shallow, off-colored water, I like to throw Bass Assassins, 5-inch or 7-inch, rigged on a Mustad Tru-Turn hook with a rattle inserted into the plastic. This is a great setup for stalking big trout. I have seen many times when the lure with the rattle totally outperforms those without. Jigheads with rattles such as the Rockport Rattler have also proven to be effective under these types of conditions.

Let me try to clear this up for you a little. You are wading a shoreline throwing your favorite topwater. The water is clean and you have a considerable amount of bait activity over your chosen structure. Pushes, pops and even massive blow-ups are being encountered but hook-ups are almost non-existent. To me this is the ideal time to rig up a Mauler rig and duplicate the noise and surface commotion of a topwater that draws the fish within striking range, but now that fish has a soft plastic bait sitting right in front of him.

It is also worth mentioning that one might want to select a rod with a little more backbone when throwing any of the rattling cork rigs. The weight and, more importantly, the water resistance created by the cork, are going to require a heavier stick. You'll find the heavier stick helps deliver solid hooksets when the need arises to overcome that weight and resistance. The new Waterloo MAG 3 is a highly sensitive 6'6" stick that delivers a punch when the money is on the line. The Waterloo HP Slam and HP Slam Mag in 6'6" will also perform beautifully with these rigs.

The cork thing works, harder on our arms and back, but it works. I know of a good many FLW Redfish teams and Redfish Cup teams that put this strategy to winning use in last year's events when the conditions warranted this technique. Noise is not everything all the time, but it has been a proven fish attractant. The next time you find yourself on the bay and the fish seem to be in a major funk, MAKE SOME NOISE and see what happens.