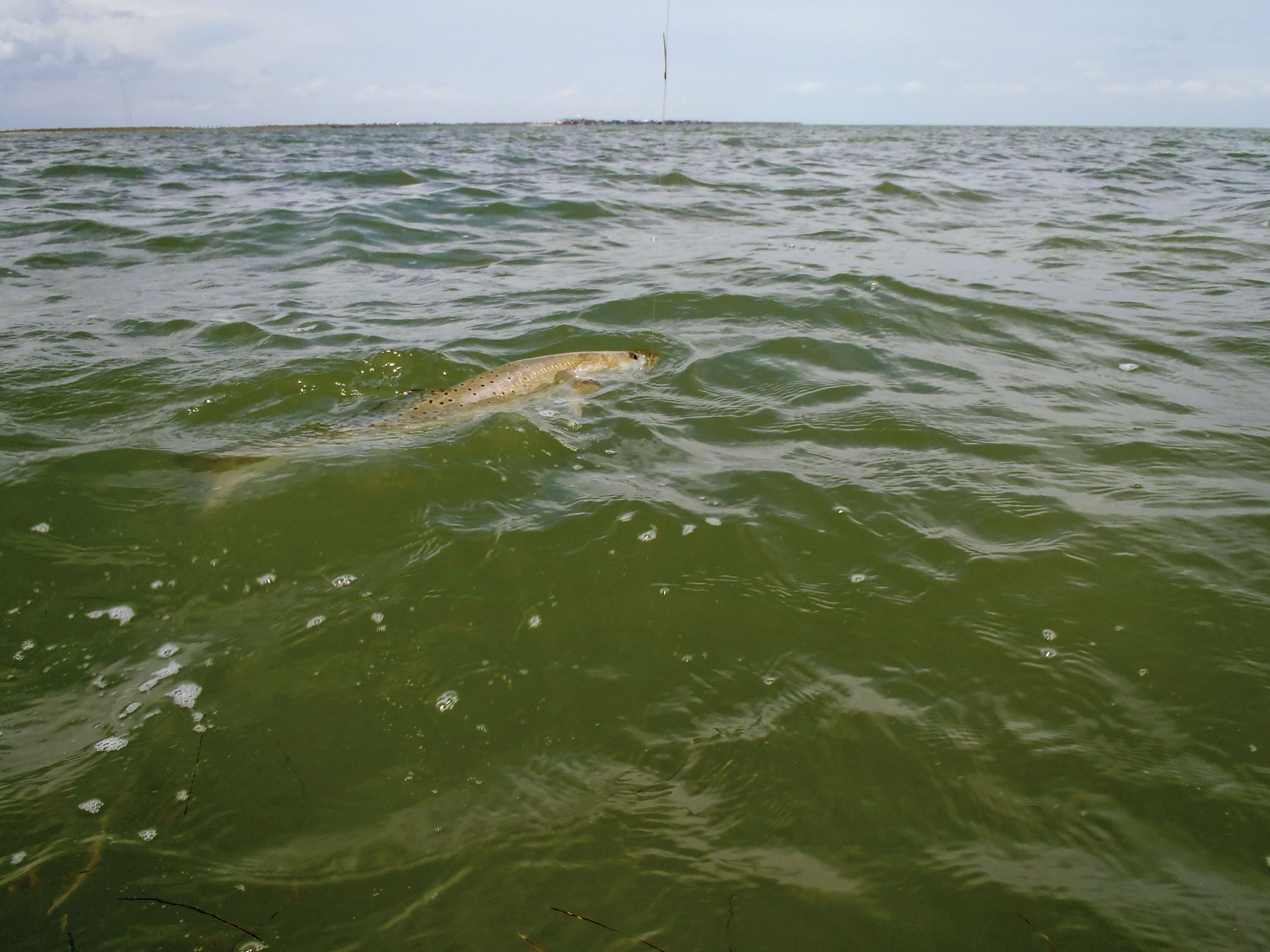 Beautiful 27-inch trout being played down in trout green water.
This month I want to tell you a fish story. The story is true and involves my sons, Jay Ray and Ryan, and of course me. You will see why fishing has been at the very heart of everything I have hoped to teach my sons about life. I believe I was a good dad most of the time. Divorced a bunch and seldom a good husband but with this I am still a work in progress. I was raised in a middle class Christian home. My mom worked at the school and my dad was a teacher and coach. I am certain they could not afford all that they provided for me and I have certainly done the same with my boys. The story will give you an insider's look at the "real" Watkins fishing team. It is meant to make you aware of the possibilities available to your children by using fishing as the tool to open and broaden their lives.

The boys learned to fish at a very young age. I have photos of them fishing; actually wading, when they were five years old. We did not get to cherry pick our days. They went when I was off and I was usually off when weather cancelled clients. Both loved to fish from the start and were always eager to go with me. I have to believe that the passion I had somehow genetically passed itself along. As the boys grew into teenagers, fishing continued to consume them. For sure, worse choices of activities could have been chosen.

If they were not wading the shorelines of San Jose with dad, they were knee deep in the lake behind the house. No one, and I mean no one, ever beat Ryan on the lake - no matter what Jay Ray might remember. He just took to the bass fishing and fished nonstop, learning where literally every fish in the lake preferred to live and honing to near perfection methods needed to trick them into eating.

Jay Ray was a deck hand for Brad Smyth and Brad taught him plenty about all the work that comes before and after the fishing. Later on Jay Ray worked with me as did Ryan, helping me clean fish and fetching the boat after a long wade downwind. No remote Power Pole setup in those days. The time spent together created a bond, a bond that would sustain us through many difficult times.

Once out of high-school Jay Ray was dead set on becoming a guide and spending his life as I did. The week prior to his graduation we fished the Rockport Trout-Master tournament and won the event. Jay Ray won the largest trout for day one. We took home almost $16,500. The stage was set for us as a team. It was hard seeing Ryan not getting to fish with us due to still being in high-school. He was our best fan and pre-fished with us as well as saw us off at every event. To look back at him sitting on the dock pumping his fist for us as we pulled away still brings a lump in my throat. Little did Jay Ray and I realize that his tournament career and accomplishments would far surpass ours.

Jay Ray and I continued fishing all the trout tournaments as well as the three new redfish tournament circuits, the I.F.A, FLW and Texas Redfish Series. We struggled in the FLW events, never winning one but leading several times and making the top five several times. For some reason the fish and the man upstairs were not ready to grant us a win. We would lead an event, sometimes for two days, but end up zeroing on the final day. I have always saved my worst performances for the biggest stage.

To watch Jay Ray suffer through the disappointment of losing was devastating for me. With every defeat, his heart broke a little more, mine too. I was letting him down it seemed but in my heart I knew it was not about me. Luckily for Jay Ray, there was little quit in my upbringing. When knocked down we got up and vowed to do better the next time out.

I think back often on all the days when, as a trout fisherman, I referred to redfish as bottom grubbing, mud sucking, blank, blank carp. Guess they were having a really good time with my defeats. So the relationship repair started. I stopped dogging them and finally a year later they decided it was time to play with us again. Three major wins in one season and four top-five finishes would set Jay Ray on his way up, and me on my way out. Never had a partner that I had more confidence in once the fish was on the line. The boy can get it done when put on winning fish.

Meanwhile, Ryan was graduating from high-school and headed to Stephen F. Austin to attend college and try out for their collegiate Bass Team. SFA at that time had just won the College National Championship. Ryan wanted SFA to win another one before he graduated; he told me the day he left for college. Ryan would not have gone to college had it not been for his love of fishing!

Ryan made the team and soon won his first team event. We got him a bass boat his sophomore year and this really got him into serious bass fishing mode. Ryan worked every year he was in college to help with expenses and still managed to pass his courses. It's a "no pass-no play" in college bass fishing, just like other sports. Ryan had highs and lows, winning an FLW qualifier for the National Collegiate Bass Championship as a junior. Competition proved tough and he fell short in his first national title quest. His senior year, he and teammate Andrew Upshaw, put on a seminar in qualifying for the national championship and then pulled off a come-from-behind win to clinch their first and the school's second B.A.S.S. College National Title. His voice broke over the phone as he tried to get out the words, "I did it dad; I just won the National title."

There was a calming silence; words would have cheapened the moment. Words could never describe the complete joy I felt for him and Andrew in that moment. He had a dream, he saw that dream to completion, and that takes a ton of dedication and faith. He'll do that now with his wife Brooke and Brodie.

When as parents we are privileged to be a part of our children's dreams it is special, these moments will be etched in our memory banks and hopefully our children's as well. Ryan and Andrew finished the season with a record setting FLW Regional win on Lake Somerville to qualify for the FLW National title that same season.

So, fishing has been our life and will continue to be until my final breathe, I think. Our fish have allowed me and the boys to enjoy the wonders of the chase. In the beginning it was all about pursuing and conquering them. Now our relation with the fish is based on a true respect, it's a love-hate relationship of a sort. I love them when they allow me to enjoy catching them and hate not understanding why I can't totally figure them out. I have come to the fork in the road where I ask myself, "What is it that I will leave?" Enjoy your time with your kids while fishing, for it's not really all about fishing. Make memories whenever you can, for in the end that's all that will be left.

I know you're wondering where the fishing report is. Honestly, the past week or so the fish have been giving me the finger, so I had little to write about.