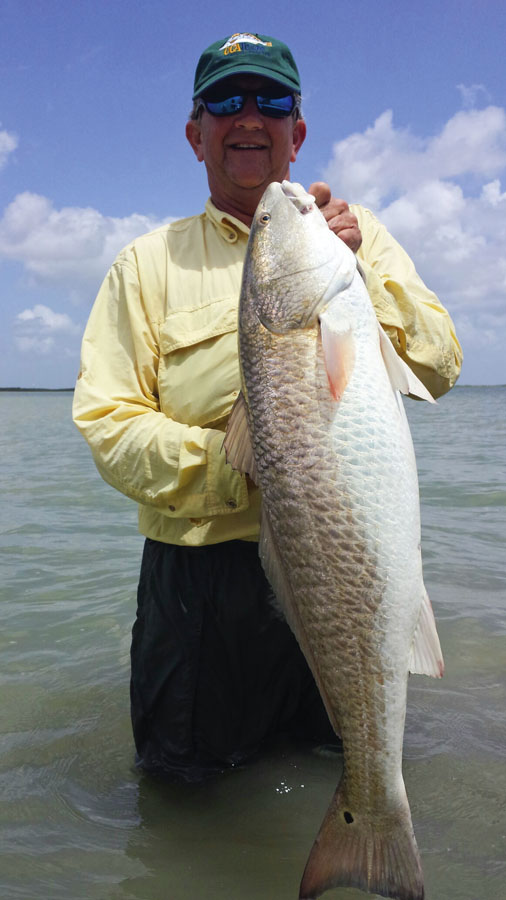 One of many oversize reds off small scattered shell area with moving water.
Hot would be the best one word description of fishing along the middle Texas coast in August. Ohmake that hot and calm if you need two words from me.

In my daily attempts at fishing, it is all about working smaller more defined areas of structures that provide food-moving water-and quick deep water access. I know I probably sound like a broken record but I don't think you can repeat statements that contain vital information too many times. So with this said, let's talk about catching them in one of the toughest months of all for lure enthusiasts.

Early is the key to finding your bait and finding your fish. Many are the days that I find my bait early on a small section of scattered shell or the remote end of a sandbar with a few grass beds but am unable to catch the fish I believe to be residing there. Paying close attention to the Solunar tables can aid us in being in the RIGHT PLACE at the RIGHT TIME.

August is the month I grind the most. Simple reason is that I know we need to work each potentially productive area completely before moving on. Couple this with the fact that feed periods can be short this time of year so you cannot waste time making long runs to areas that you think might be holding good fish so in essence you're fighting a double whammy this month. If and when you discover areas where fish are actually living, catching them is just a matter of being there when they decide to feed.

It is important to never BURN your area. What I mean is that we need to fish around the EDGES of the area we believe the fish to be. By not penetrating the safe zone the fish remain undisturbed, which allows us to come back if we have become bored and left the area to look at some other spots. I often leave areas only to return later in the day when conditions have become more favorable.

We did just that today as a matter of fact, and with great success. Waded an area along a small shoreline sandbar with scattered grassbeds. Bait was thick but water clear. With falling tide, and even with higher water temperature, I knew that a color change later in the day would cause the fish to pull up out of deeper water to feed in the off-colored stuff. Still amazes me how many supposedly good anglers run past dirty water covering the proper structure to fish similarly good structure with air-clear water. It seldom works as well as the dirty stuff.

Anyway, we got back to the area and found the water color change and bait were right where we needed them to be. An hour wade produced a dozen reds to 34-plus and several trout to five pounds. So what that told me wasin the morning we were in the right place, but not at the right time.

Moving water to me is a must if I am going to set up camp and make an honest try. I need to feel like the water is bringing me new targets on every cast. Predatory fish absolutely use the moving water to bring food to them versus them having to burn critically needed energy to chase it down. The extreme heat causes fish to have to use up a lot of energy just retrieving oxygen out of the hot water. This can stress fish on days when winds do not provide surface movement which is Mother Nature's aeration system. The next time you're on the water in dead calm conditions, take mental notes as to how active or not-so-active the fish are. I'll bet there's more times when it's not-so-active versus the other.

Speaking of predators, I love observing all of them. I have several very large Texas spiny lizards that live in my yard and, talk about predators. I noticed not long ago that as I mowed they would come down out of the trees and run alongside the mower. It seemed obvious to me that insects disturbed by the mower instantly become visible. It took me a few trips around the two acres to figure this out.

So - do you think fish might react to us in the same manner. How many times have you stopped the boat and within the distance of a few yards wading you catch a fish, and then the rest of the wade you catch nothing? Maybe, just maybe, when the boat moved the bait it triggered a predator reaction and, as Emeril would say"Bam!" Who knows whether this is the case but I like to think it's possible. I certainly have come up with plans in the past that involve other fishermen driving fish to me and that for sure works, and it works a lot!

I prefer small scattered shell reefs where prevailing winds constantly provide water movement. Don't care what the water looks like as long as it is moving and there is a food source available. In my area many of our reefs contain scattered shell that actually has grass attached to it. To me, this is the ultimate in shell structure. It's good in all seasons due to the combination of shell and grass all in the same package. This past month I have had most all of my better days on this type of structure. And - when wind has been light and the water fairly clear it's been much tougher.

Expect tough fishing the rest of summer due to the continued drought and extremely high water temperatures. Today I marked 89 water temperature at 3: 00 p.m. in Mesquite Bay. We started the day at 84 so we gained 5 over about a six hour period. I monitor my water temperatures closely during the day. A swing of a few degrees along any shoreline can send the fish deeper compared to other sections where for whatever reason it remains slightly cooler wind direction and amount of surface chop can be one.

If you don't have a surface water temperature gauge on your boat you won't be able to connect with this change, resulting in not knowing the reasons for the fish being where you're catching them, or maybe not. You gotta know that the real reason, some are better at this than others, some catch more because of what they know and observe. Monitor your water temps at each stop and you'll become a better angler.

So I am about to get a bite to eat, rehydrate, and get to bed early again tonight. The heat is harder on me each year but I have a hard time admitting it to myself. Renee reminds me and keeps me straight. I know this month's article was more of a fishing report and some old-school knowledge from an old dog with a few new tricks. So if you find yourself struggling in the August heat, try some of the tactics I talked about here today, it can't hurt.