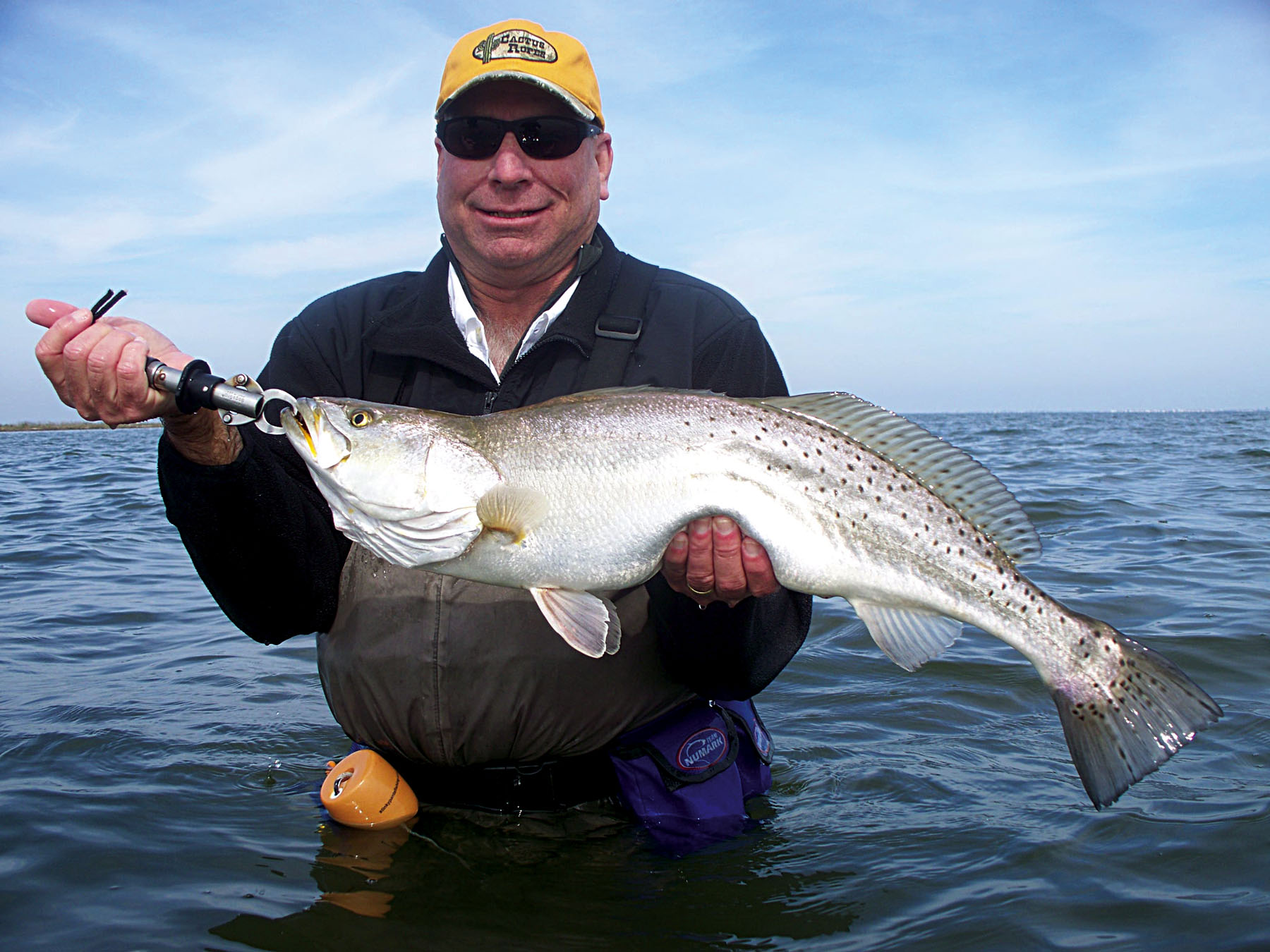 Gorgeous 8-1/2 C&R by Steve Henrickson; could not have happened to a more deserving angler.
After a solid week of trophy trout fishing that produced three fish over eight pounds and one that nudged the nine pound mark, along with numerous fives to sevens, I decided to dedicate this months issue to a discussion of our future as Texas anglers.

I am not a biologist or scientist, just a guy that has spent his life chasing fish. It has been my trademark to write and talk about the where, when, why, and how of fishing but this month I want to take you on a ride through thirty-plus years of my guiding career. What led me to this was a question from a gentleman wanting to know what changes I have observed and what, if anything, had remained the same. This question came as he excitedly released his lifetime trout so another angler might also thrill in catching her. Given space limitations, I will present a condensed version.

Obviously, equipment has changed tremendously. Boats are faster, more comfortable, run shallower, handle big water better, and have greater range. These alone have significantly increased the efficiency of fishing. Years ago, many of the areas we fish today were simply too far or too shallow. Nowadays they are but a throttle punch away.

On the subject of boats, what might seem good for us is not necessarily good for the habitat or the fishery. I'll go on record and state that I am guilty of leaving my share of prop scars during my tenure as a guide. There are pros and cons as to what could or should be done to better protect habitat and fisheries, and controversy sometimes arises through personal agendas on both sides. Now before you get all festered up keep reading. I think you'll enjoy the ending.

Tackle design and quality have come forward in quantum leaps. The rods we use today are like nothing we had thirty years ago. We have actions for every fishing situation and they are sensitive beyond belief. I jokingly tell clients, "I can feel the fish studying the bait." Line, both mono and braid, is stronger and smaller in diameter than ever, allowing longer casts with better feel. Reels cast farther, crank smoother and faster, and the drags run out like silk. The combined rod and reel weight is now measured in ounces allowing anglers to fish all day without fatigue.

Sharper and stronger hooks provide more hookups. And, we have Simms for goodness sake. This brand of wading gear and undergarments provide comfort in the nastiest conditions. GPS systems and sonar units allow us to return to the scene of the action.

So you see a lot has changed, and with it came increased interest. The crowds came and all who profited reveled in being part of it. We had saved the fishery from ruin in the 70s with the elimination of netting. I sometimes wonder whether the trout might prefer the nets back and the hooks gone.

For years I have broken my arm patting myself and my cohorts on the back for our good deeds. I fell in love with the dollars and more than that the notoriety that came to many of us in the early years. I called myself a sportsman and thought because I belonged to a proactive conservation association we were doing our part. What a hypocrite I was, protected by a logo on a hat that said I support conservation so its OK to always take as many as Parks and Wildlife regs allowed and I passed that mentality to thousands of fishermen. What a selfish, ego-driven bastard I had become, in love with myself and my knowledge of fishing, but never once considering the fish.

I've always loved catching big trout and reds but until a few years ago I did not love or respect the fish. I loved conquering them.

I awoke one morning a few years back and realized that my life is nearly three-quarters lived. Add up the physical abuse of guiding and all the UV my body has absorbed and I might be dead already and just not know it. I thought aloud, "I'll die on a long wade back to the boat some day and I'll be remembered as the guide that left nothing."

Don't think for a minute that I don't care what people think of me and that my past actions don't haunt me. What needs to change is our definition of a successful day on the water. It is not whether we get a limit. We would be wise to look at the world of bass fishing. I have and I'm going to change.

I'll keep fish if I need one or two and release the rest. I'll fish because I love the challenge. If it continues to provide a nice living for me and my family I will consider myself blessed. For the first time in my life, the fish matter. I'll teach everybody everything I know, so long as they are passionate about the fishery and passionate about learning. I'm going to be releasing most of mine, and your share too, until you decide that joining me is the right thing for you.

Oh and by the way, I have a new 24' Haynie High Output being rigged by Chris's Marine in Aransas Pass so I won't have to run our shorelines when it is rough anymore to save this old back of mine. I'm going back to dancing with the one that brung me! Thanks for listening.

May your fishing always be catching Jay Watkins