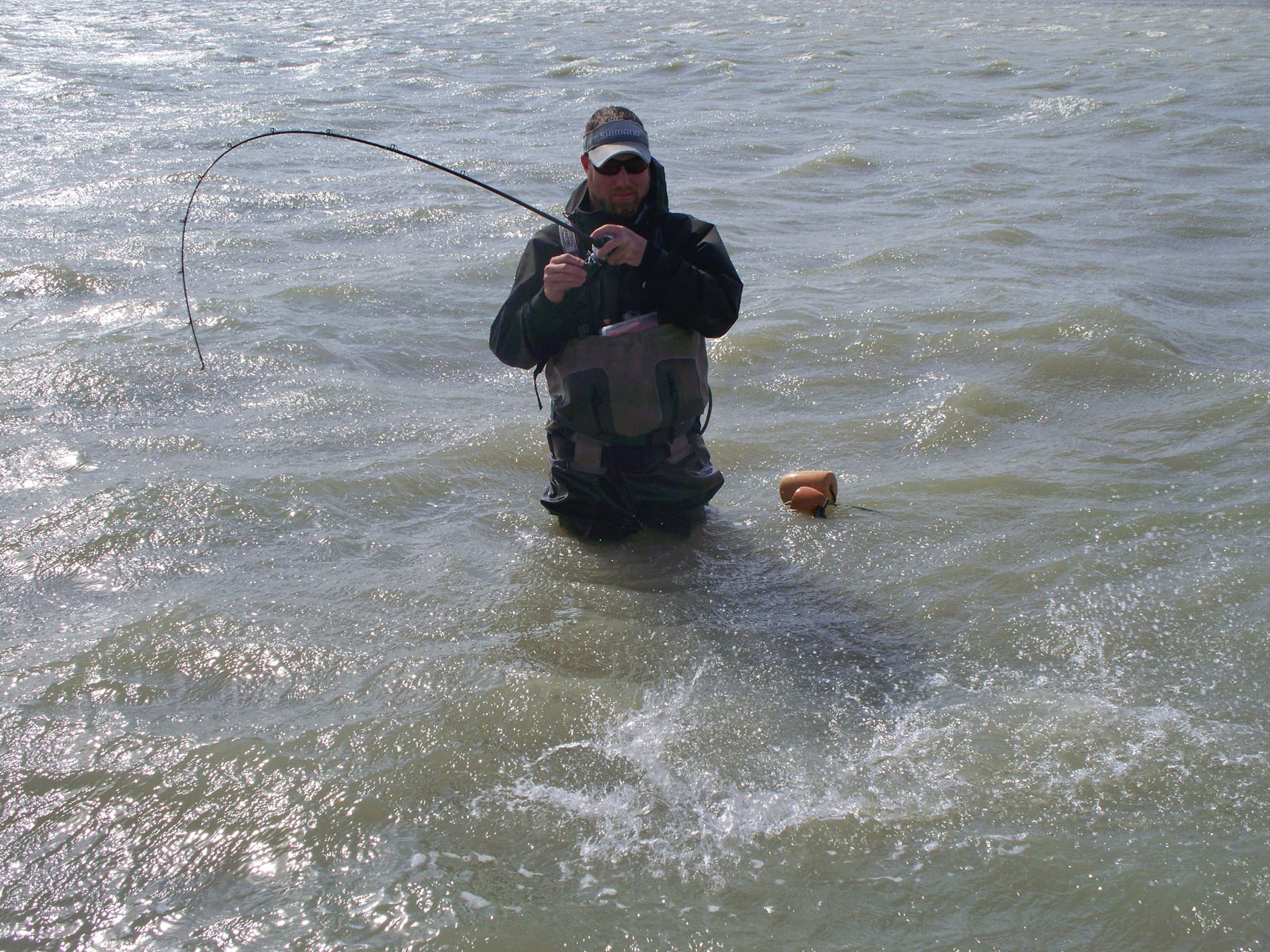 John Havens in not afraid to fish dirty water.

It seems the majority of the Texas coast came through the harsh freezing temperatures during the first days of February in pretty decent shape. There were some fish killed in East Matagorda and the southern reaches of West Matagorda but overall it looks as if we might have dodged a really big bullet. Rockport and further south seemed to have had very few trout killed. I have personally seen only a few trout and no reds at all during my days on the water from San Antonio Bay all the way to West Bay at Port Mansfield. I am maintaining a positive outlook for the middle coast. If we get rainfall amounts anywhere near what we received in 2010 I think we'll be OK.

I truly appreciate the emails and comments I get from many of you about my articles. This magazine has tremendous writers and then it has reporters such as me. I try to translate to you what I think I have learned over the past thirty-two years. If you want more story time out of me, book a trip, I have tons of stories and some are even true! With that said, let's get your April game plan together.

With the windiest season of the year upon us it is time to start thinking about fishing windward shorelines where waters quiet often become less than desirable to our eyes. I am a firm believer that you can catch more and bigger fish in murky, wind-stirred water. Over the years I have continually found that fishing water with limited clarity and a good surface chop pays big dividends. Big fish, especially, thrive in such conditions. Yesterday I had client catch a six and a half pound trout in waist deep water the color of drilling mud with waves slapping the middle of our backs.

Sustained winds near 20-mph will greet you most mornings for the next several months so get mentally prepared for it. You do not have to have clear water to catch fish on artificial lures. You will need to adjust your arsenal to include lures that are visible in darker water and make noise. Scented baits are also very effective here. I like to use B.A.N.G. spray-on scent by Bass Assassin on baits that are not factory-scented. Topwaters such as the MirrOlure She Dog and She Pup will get my skinny water work as will Super Spooks in all sizes.

Colors will be pretty simple; bone, black, chartreuse, and hot pink. Any combination of these colors will work . On the plastic scene I will be throwing five inch baits, some of the rattail design and some paddletails. Use 1/16 ounce jigs for shallower applications and then 1/8 to 1/4 for deeper water. The heavier head will create more action with your swimming type baits. The vibration created by the swimming action in dirty water is one of the keys to success. The new Die Dapper lures from Bass Assassins have big-time tail action and a slower sink rate due to body size and salt impregnation in some of the baits. Freshwater anglers are big on salt and I am quickly becoming more of a fan of the additive myself. Salt gives the bait more buoyancy, thus a slower sink rate. Slower falls between twitches has always seemed to produce bigger fish for me. Old standbys are sure to produce but I have found a place in my tackle selection for some of the new stuff too. Change is a good thing I think. Who knows, fish might grow accustomed to the same old look and be turned on by something totally different. Ryan says bass react that way so I wonder if redfish and trout might react likewise?

Over the past several months our water has been clear for the most part and tides low. Hopefully many of you have been taking mental notes as well as marking areas with suitable bottom structure on your GPS. Winter is the absolute best time to locate prime fish-holding structure. Humps of harder sand on a flat with softer potholes nearby and also shoreline guts where springtime grass will soon appear are sure to be prime producers. I am seeing some grass growth already along the shorelines as well as the flats. Small guts that cut up into and along shorelines can be easily seen during the lower tides. These systems of guts and bars, (can't have one with out the other), will be used heavily as springtime tides rise and wind stacks water along windward shores. Guts, however slight, can hold large predators, so serious attention should be given to these areas. Consider how fish patrol the edges of a gut. With this in mind continue casting and easing along a line parallel to the gut. This, and patience, will afford the best opportunity for success. Shoreline guts are fish highways; keeping the bait in the road will eventually result in a head-on collision with success!

Last but not least, be careful on windy days. Big bay water can get mighty rough and carelessness on your part can lead to tragedy in the blink of an eye. Don't become another sad story we tell around the marina in the mornings.