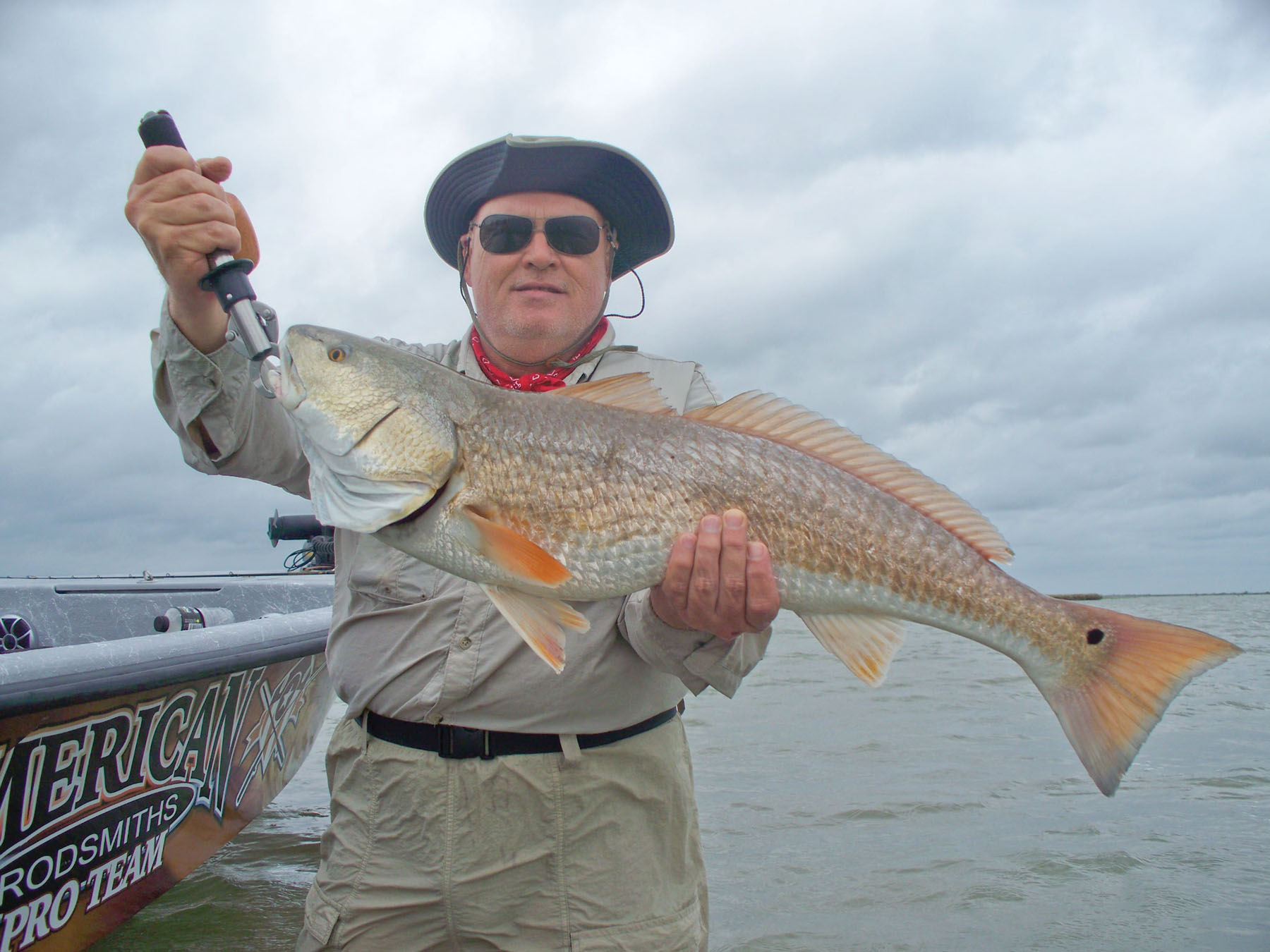 Redfish such as this 12-pound brute will become common in July.

It seems to me that over the past seven or so years the - I want it and I want it now! - attitude has made its way deeper into our fishing world and I personally despise this mindset of entitlement. Just because you have the best gear and maybe even hired the best guide, catching will never come with a guarantee. Even though I spent over three hundred days a year on the water in the beginning of my career, my boys still had to learn how to FISH before CATCHING became part of their day.

Fishermen need to concentrate on learning how to fish rather than expecting to be able to fish when little to no practice time is given to the sport. Yes, fishing is a sport, it takes some athletic skill to be able to cast while being pounded by waves and good eye-hand coordination is a plus when trying to cast accurately to visible fish or structure. Quick reactions and a fine sense of feel are required during the presentation. Stamina is necessary to be able to perform when battered by sun, wind and wave for eight hours or more. Throw is some long wades over not-so-good bottom and you had better be in shape.

The way I see it; fishing is a privilege and it disturbs me seeing so many taking it so lightly. You owe it to yourself to at least try to be the best you possibly can. I promise you this, those that love it most are typically some of the best at it. Good work ethic can carry you a long way during a day of fishing and certainly a long way in life.

The reason for my opening paragraphs is the challenges we will face in July. Hot, humid and calm will be the forecast most days and with it comes tough fishing conditions. This will be especially true if the current drought conditions continue. Hot, shallow, and clear water can be the toughest to consistently catch fish in, especially speckled trout. You say you catch tons of small trout this time of year. Well, good as that action can be, small is seldom what I am looking for. Luckily, as the result of thirty years of conservative regulation, redfish provide Texas anglers with an abundance of hard-fighting shallow-dwelling fish. They too at times can become finicky in the calm, air-clear waters of July but, more often than not, if we find them we can catch them.

First, let's talk about what we need to do to find quality trout in July. Pre-dawn runs across the bay come to mind here. An early start is usually the beginning of a good game plan as water temperatures cool slightly overnight in the shallows. You should target areas along shorelines and flats where deep water lies close at hand. Overnight cooling of shallow water triggers feeding and I personally believe nighttime feeding is the predominant pattern this time of year. I also believe the biggest of the bigs feed almost exclusively under the cover of darkness much of the time.

I am a total believer in locating lanes the fish use when exiting nighttime feeding areas. By positioning along the deep water line, you can intercept these bigger fish as they slowly make their way back to cooler depths where they hold the rest of the day. I like to think that even the keenest predator is vulnerable to taking one last bite. I know that trout, especially upper-class fish, are suckers for small offerings presented along the edge of the off-ramp. I've seen it too many times and know I'll see it some more. The last part of your game plan should include areas where you have strong early morning water movement. Wind-driven is less likely in July but can happen. You'll need to pay very close attention to your local tide and solunar tables.

Redfish, on the other hand, seem to enjoy wallowing in the hot, shallow stuff and some of the year's best sight-fishing opportunity occurs in the hottest months. Tides are typically lower and, with light wind, tailing and waking reds will be easy to spot in July. Redfish too feed at night but they stay on the flat much longer. It is usually midday or early afternoon before they retreat to deeper water. In backwater areas redfish may live weeks in a foot or less and they do just fine. I am always amazed at how shallow a big red can get and still leave only the smallest of wakes while meandering the flats.

Redfish are notoriously noisy feeders and there's never been anything remotely subtle in the way they knock a school of mud minnows against a clay bank in the early morning light. Anglers should learn to use their ears as much as their eyes. That distinctive slurp leaves no question where your next cast should land. I will go on record saying I find more redfish along shorelines and rip-rap by hearing more than actually seeing.

July will also see our reds starting to school. I believe this is due mainly to water clarity. It is much harder for one or two fish to herd and attack bait in clear water. But, find a big school pushing across a flat and you have a virtual redfish shrimp net with a live tickler chain. If you're familiar with how a shrimp net works you understand what I am talking about if not I'll explain. A shrimp trawl is wide at the mouth with planing boards or "doors" as they are called at the outside corners. As the boat pulls the net, the doors move outward, opening the net to its maximum width. The upper edge of the net has floats to keep it high in the water and lead weights to sink the lower edge. A length of heavy chain is also connected to the lower edge to "tickle" the bottom ahead of the net and jump the shrimp out of the mud and grass where the net can catch them.

Schooling reds do exactly the same thing, swimming in tight formation jumping baitfish, shrimp and crabs from their hiding places right into the waiting mouths of one another. We actually look for the telltale signs of bait jumping followed by the belly flash of reds eating within the school. On deeper flats the reds do not always wake the surface. I have seen schools as large as 500 fish making no more than occasional, slight ripples. It is one of the most awesome sights any avid redfish angler can be privileged to witness. It will happen in July and it will happen often.

So there you have it, my opinions on why you should strive to be the best angler you can be, and my game plan for what looks to be a hot and dry July.

May your fishing always be catching! Guide Jay Watkins