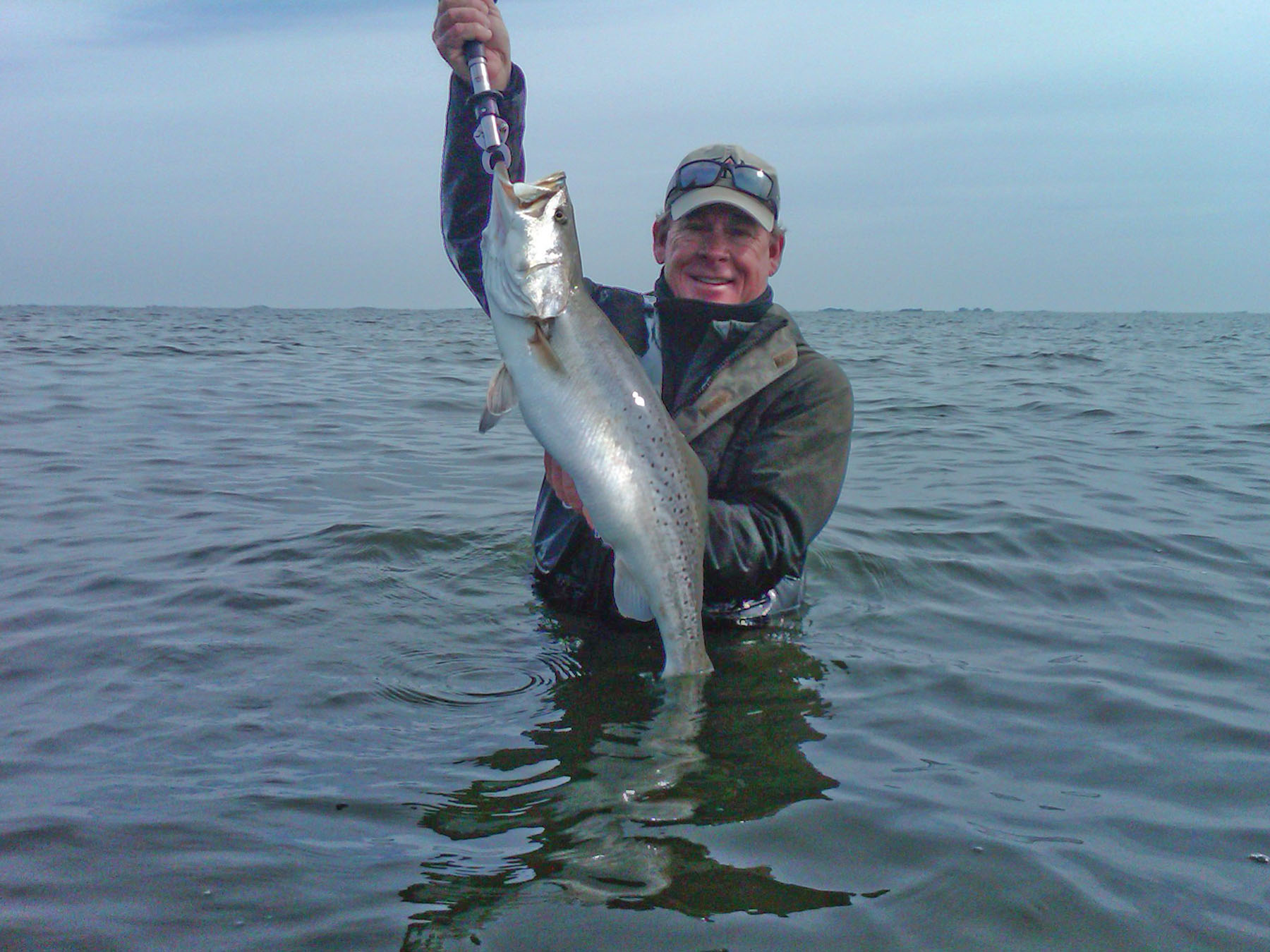 Solid cold-water trout caught over grassbeds.
I have been asked countless times why I prefer wade fishing versus drifting and fishing on the trolling motor. My answer has always been the same I believe wading gives the angler a distinct advantage in finding and staying with fish for longer periods as well as greater freedom in casting. As a guide, I believe wading provides the best opportunity for clients to learn technique as well as catch fish.

Expectations rise among diehard trophy trout anglers with the passage of each northerly front. Given the ample rainfall received in 2010 I expect 2011 should be better than average for fish pushing the eight pound mark along the Middle and Lower Texas coast. There is some concern over the fish-kill that occurred in Baffin in early September but bad as some of the photos looked my sources assure me that it was localized and did not affect the entire bay system or other areas surrounding Baffin. I saw very few dead gamefish from the Kennedy Causeway through the Land Cut. Alazan, Laguna Salada and Cayo Del Grullo were hardest hit as far as trout and reds go but even here I am told the kills were highly localized. Corpus Christi and Aransas Bays were unaffected. I am an optimist looking on the bright side; I think we are in for a good winter and early-spring trophy season.

A few issues back I walked you through a morning of summer trophy trout hunting and received more e-mails about that article than ever before. So in this issue I'll take you on a winter trophy run. I hope you enjoy the trip.

It's 5:00am. The temperature is a damp 50F as I stow my Simms wading bag in my already warming truck. What I carry in the bag are some of the most important items for the day. Simms G-4 waders, Simms Freestone wading jacket and my very comfortable Simms Flats Sneakers are all that separate me from the harsh conditions of winter fishing. I am already wearing my Simms WaderWick undergarments, wading socks and Simms Guide Top. I have the boat hooked up and my rods are in the seat next to me. It is Thursday, so I listen to Mickey Eastman on 610 Sports Radio. Maybe I'll call in and talk as I drive the forty-plus miles to Bluff's Landing. I get the boat in the water and grab a quick cup of hot coffee from the marina. My guys are getting into waders on the tailgate of their truck. We are all anxious to get on the water knowing that nighttime lows near 50 along with daytime warming could produce a very special day. After small talk and a few lies about trips past we get serious and settle in for a chilly run to the fishing grounds.

NE wind at 15mph and water temperatures in the low-50s send me past the shoreline potholes of the King Ranch. I'd prefer to sink a little with each step this morning with water temperatures just above the 50 mark. Forty-five minutes later I am standing in mud to my calf. Ten pounds of Thanksgiving and Christmas feasting bog my wade somewhat today. Not to worry, a week of this and the extra weight will be gone. I have my guys fifteen to twenty yards either side and have instructed them to move slow and cast to any and every mullet we might see.

Bait is slow to wake but in the distance I see an area where a few mullet are flipping nervously. Over the years I've learned that flips are better than jumps. As the sun rises higher we begin to see darker patches in the water; these are grassbeds, our structure for the day. My tackle selection is pared to bare essentials (several MirrOlure/Paul Brown Corkys, 5" Bass Assassins and a few 1/16 ounce jigs) and fits in a small box wedged between my wading belt and lower back. In the soft stuff you need to be able to move quietly so less is better. No net or stringer trailing behind, only my Boga attached to the clip on my belt. My camera is in my jacket pocket along with lip balm and lens cleaner.

The water is stained but clear enough to make out the dark grassbeds. A mullet rolls over the top of a grassbed just within my casting range. A cast to the area is met on the initial fall with a solid Ka-Thump! Quick reel down, then set, and we're on! Good fish. A frantic surface act and then she runs right at me before looping back out and loading the rod and pulling a little drag. If it takes drag on my reel, she is a five pound class fish. Say what you want about a tight drag but my history reflects that a stiff drag, small hook, and a rod with some backbone works. This fish is a trophy in waiting; five pounds on the Boga but barely twenty-four inches so the potential for this fish is tremendous. Good genetics and age often result in the production of a true trophy fish.

As the day warms the bait becomes more active and bites more frequent but most are not the fish we are searching for. A few nice fish escape our hooksets and one lost at hand looked to be a seven. With the amount of bait and the bottom structure in the area I ease back and move the boat down about a quarter of a mile while my guys continue fishing. A little more bait along the outside of the flat begins to appear. A drink of water and a Power Bar and I am back in the water heading towards the bait and my guys. BAIT IS EVERYTHING IN WINTER TROUT FISHING so when you find good bottom structure and a food source STAY PUT!

Outside the bait line we start picking up solid trout to near five pounds. Not the fish we are looking for but it is likely that a big fish could be mixed in with this age class. The action is not fast but it is steady and each hookset brings anticipation. As we approach the end of the major (feeding period) our flat slowly goes dead as if on cue. An hour and a half of chunking without out a bite sends us back to the boat. By now our legs are tired of trudging through the mud and the photos on the camera will show a pretty darn good day of trout fishing.

No we did not get that trout of a lifetime but we did enjoy catching some better-than-average fish. When targeting a select class of fish we often encounter fish much better than the average but it is still no guarantee that a real trophy will be caught. It is days like we just had that make that one day so very special. I bet you thought the story would end with someone catching a ten pounder. It certainly would have made a great ending but in all honesty those endings are rare and rarity you see is what makes the quest so exciting. Wade slow, see everything around you and dream in double digits.