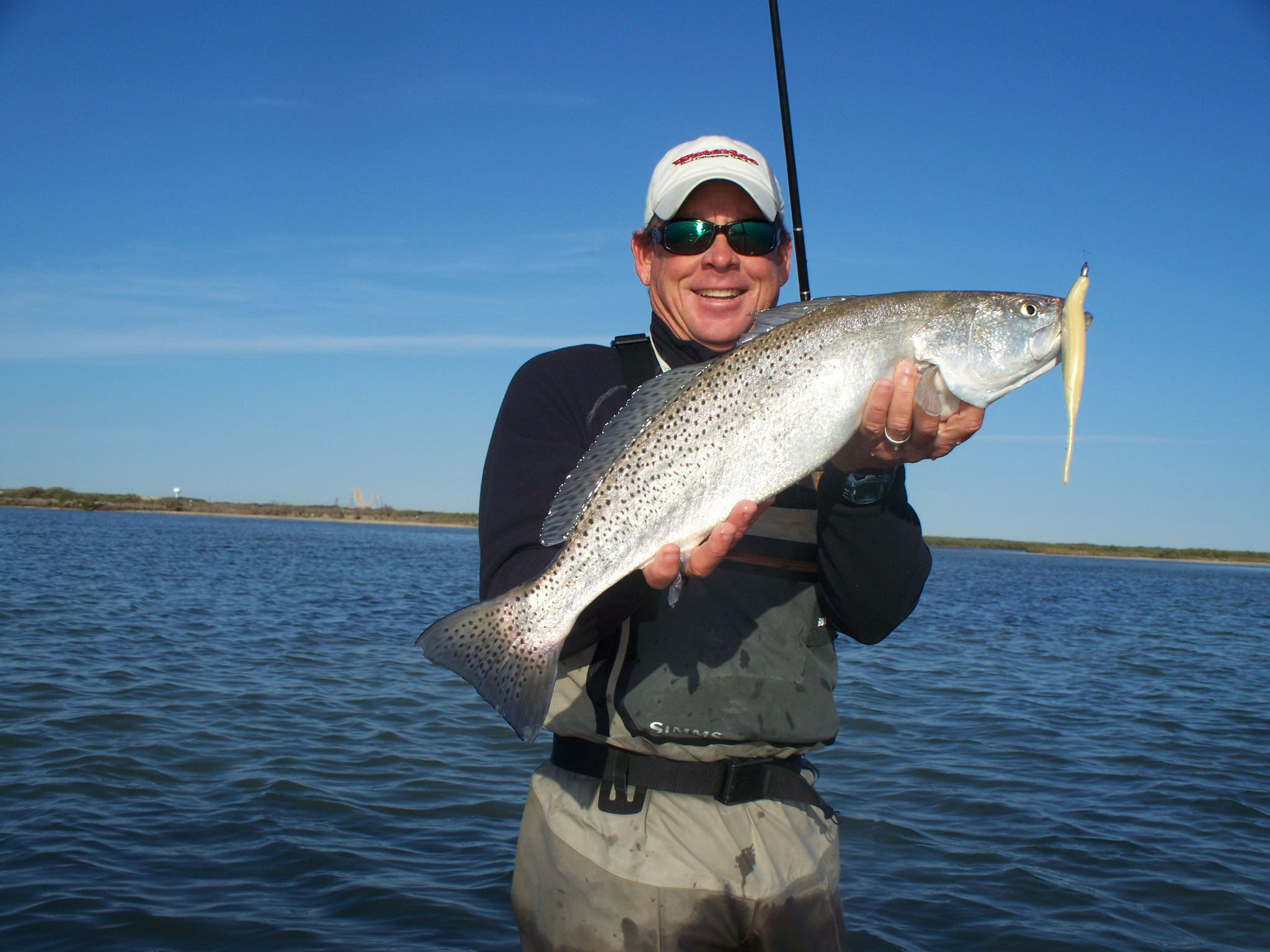 Bait activity was the key to getting a shot at this wintertime trophy.
I hope that all have survived the holiday season and received many blessing from being with friends and family. I enjoyed having Ryan and Jay Ray together on the boat with me for a couple days of duck hunt and fishing in early January while they were off. I have to tell you that 2008 was a blur for me. I honestly think it is true that the years go by faster as we age. I notice that I have lost a step when it comes to the long wades back to the boat in the soft winter mud. Not to worry though; I'm hitting the track and getting that step back before the tournament season starts.

Winter is a time when locating bait is probably the most important aspect of your day. I would venture that I have been asked at least two thousand times"What is the single most important element in locating trophy winter trout?" The opening sentence to this paragraph is the key in my opinion, it's all about staying with the food sources.

The bottom structure on most of the well-known big trout haunts does not change very much from season to season. Weather patterns change and the bait moves, these two factors will most often control your day. It is not necessary to locate large schools of bait. It is a blessing when we do but, I have found that the scattered occasional mullet flipping along an edge of my chosen structure for that day is often the ticket.

In the last issue of this magazine, Mike McBride mentioned that he prefers scattered mullet or the outsides of the larger pods of the bait he locates. Listen to the man, he is dead on. In my home waters a mullet flipping here and there over scattered mud, shell and grass is as close to a guarantee as one can get. The trout featured in my article this month was caught due to watching a single mullet flipping along an edge of soft bottom with a clump of shell and grass scattered here and there.

Trout of this size eat big mullet this time of year. The reason is fairly simple; there are not many baitfish of any other sizes available to them. I am not going to get into the big bait/big fish theory because I am not a total believer in that line of thought. I am however a total believer in the fact that our trophy-sized trout stay with the bait during the coldest of conditions. Oh, and for the record, a 5-inch shad Bass Assassin twitched under big pods of bait can be deadly this time of year. A 5-inch Assassin is no Big Mac or Quarter Pounder, it may qualify as a McNugget though, and that's as far as I'm going into the bait size argument.

Something I see happen time and time again is the impatient pressuring of an area. For me it is easy to go to an area and camp for the morning or the entire day when I am looking for one big bite. I get to go just about everyday this time of year; for those with less opportunity I can see where they might tend to believe in the "cover more water - catch more fish" logic. Wrong guys, especially when you're in the right area.

The apex trout in any given area move and feed in stealth mode, and by definition that should suggest a very slow go at it. On the day I caught the trout in the accompanying photo, my group, me included, had pushed offshore just a little too far. The bait flipping on a line behind me and just a little to my right got my attention and pulled us back to where we should have remained and aided in getting a shot at the big fish.

Be prepared to work an area thoroughly. Cast to every piece of bottom structure you can see and vary your angles. I am a huge believer in presenting from every possible angle you can create. Remember, fish prefer to feed into the current. Many times this will require anglers to cast into the wind. The easier downwind presentation often means the bait will be coming up from behind the fish which is not natural within the realm of predatory feeding. Predators position themselves in a fashion that allows the prey to come to them. This is why fishing at angles is so much more effective.

By angling your casts across the structure, your bait swims in front of more fish, right where they expect it to be. By casting into the wind on days with little to no tide current our baits are once again being presented out in front of the feeding fish because wind moves water too. The Mirrolure Catch 5 and Paul Brown's Corky Fat Boy are terrific baits for accomplishing long casts into stiff wind. Keep your casts low. The lower the bait flies into the wind the farther it will carry. If you haven't tried the Daiwa Sol you need too. This reel casts great into the wind, plus it is very light and easy to cast all day.

It's all about staying power this time of year. I guarantee, those with the willpower to choose an area and then fish through the Major and Minor feeding periods, including lulls in-between, will find themselves with the greatest rewards at the end of the day.

May Your Fishing Always Be Catching. -Guide Jay Watkins