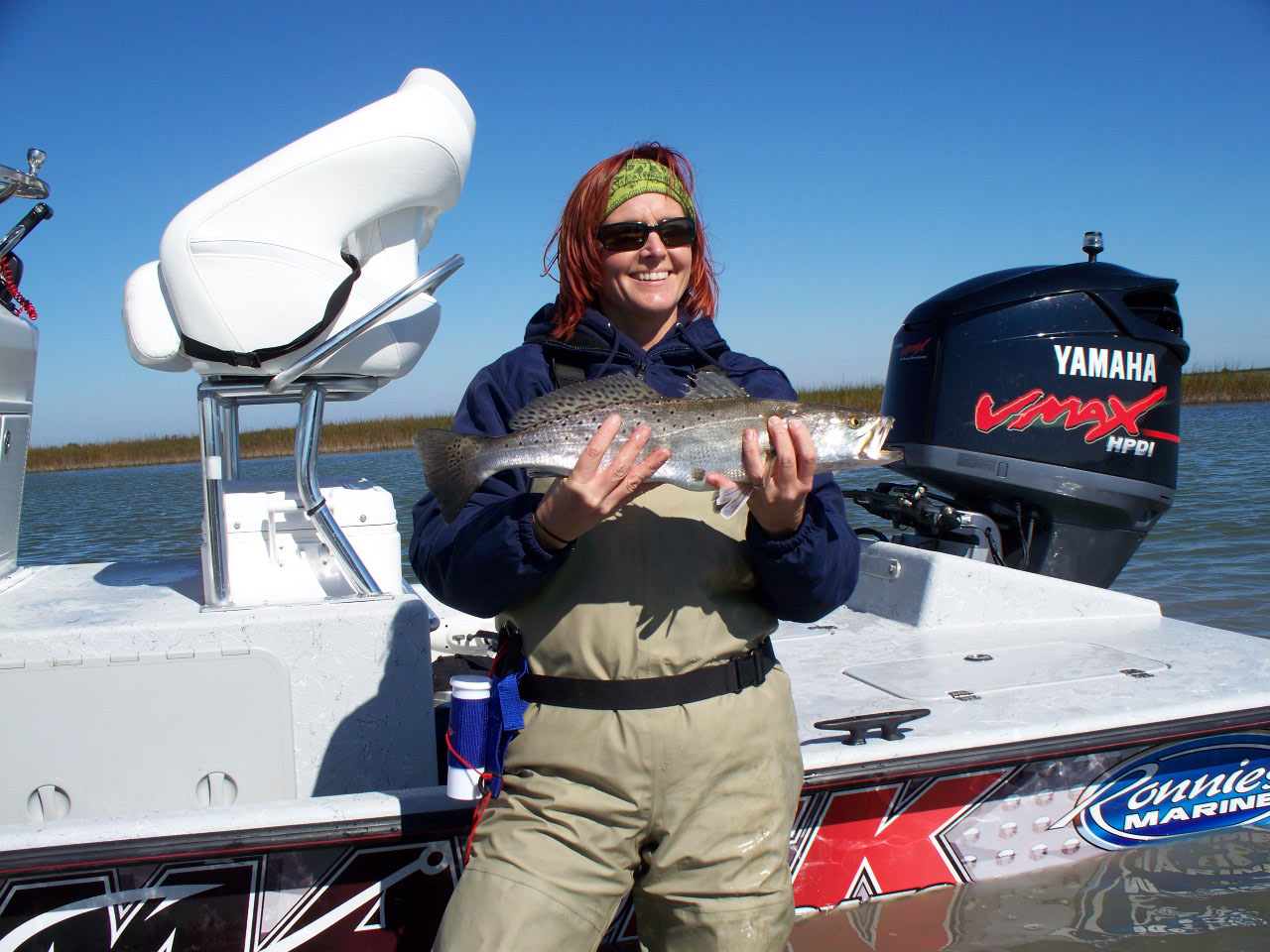 Here’s Red with a beautiful trout caught while watching an osprey working bait in a shallow lake off San Antonio Bay a few weeks ago.
I loved the lion in the Wizard of Oz and while working on this article I was reminded of him. At the beginning of the movie he was not what he appeared to be, kind of like the wintertime pattern I'm going to present here.

My goal here each month is discuss topics that are new and different. I get tired of hearing those same old worn out lines that have been used over and over and I don't want anybody feeling that way about mine. So with this in mind, let me begin by saying that the stuff I've got for you this month is not widely understood and you're not likely to read it anywhere else. Before we get to it, though, we'll need some background. Where I'm taking you is beyond the obvious, it might be a little boring at first but please bear with me.

Most of you have heard more times than you care to remember how important it is to find soft, dark, muddy bottom to find winter fish. Well - in case you haven't noticed - all soft mud is dark. I have never seen soft white mud unless it was in a Halliburton mud tank many years ago.

You probably have also been told many times that a single mullet flipping in the appropriate area is as good a sign as you will need for that day. While this may be true, let's face it; when you can see the bait you don't need me to tell you where to fish.

You have heard me speak many times about sight-casting; sometimes to fish, sometimes to bait, sometimes to structure. The key to sight-casting is our ability to actually see things. I love it when I get to fish with someone like Cliff Webb. He punches his lure toward every mullet and every rock, pothole, or grassbed that is visible. Like I said, when the signs are obvious confidence typically runs high. However it's the day when NOTHING can be seen that drives many to throw their hands in disgust.

So let's head into the real world - during the winter months we often encounter heavy cloud cover and visibility is often limited. Fog and periods of slick-calm can be just as common as days with 30-plus mph winds. Poor water clarity is another problem. Under any of these conditions we can find it difficult to locate that precise spot we need to be casting to.

I am of the belief that once water temperatures drop into the upper-50s trout will stage in areas that are consistently warmer and these areas have common denominators. All have soft dark bottoms. Most are situated in coves or pockets along shorelines in back bays and lakes. All have bottom structure that affords gamefish some type of ambush point. All have some type of deeper gut that allows for coming and going without notice. And most definitely, all of these spots consistently harbor large numbers of baitfish.

During warming trends our fish may move to the shallowest areas in the general region and during the coldest of times they will drop to the deeper quadrants of that same area. Winter run fish do not feed all day long. In fact, it has been observed that winter fish may feed only once every two or three days; but when they do it is an all-out gorge, eating enough to sustain them for days at a time.

With staging areas and feeding patterns covered, it is time to consider signs to look for when the WELL-KNOWN signs are absent. Enter grebes, ospreys and loons. Notice I have left out the pelicans; those guys are obvious.

The grebes, loons and ospreys go largely unnoticed by many fishermen. Heck, some people don't even know what a grebe is. By the way, I love birds and notice all of them - majestic whooping cranes, great blue herons, rails, gallinules, oyster catchers even the funky little grebes. Have you ever seen a grebe fly? It's hard for me to figure how they ever get down here with that spit and sputter flying technique.

The cry of a winter loon on a foggy morning will surely make you think of Henry Fonda and Audrey Hepburn in the classic film, On Golden Pond; but their call can also be one of the clues we need to find fish. The majestic osprey with it's shrill cry and graceful swoop to catch a fish is awesome to watch, it can also tell us where we need to be. These are smart birds, great predators all, and very helpful to those of us who take notice.

I think of the grebe and the loon as gardeners as they love to work the grass. They can lead us to grassbeds and other useful structure. These birds are fish eaters. So not only do they provide information about structure we cannot see, they also tell of the presence of baitfish we cannot see. You have to watch the loons, though. They are aggressive and have been known to take a soft plastic or a Corky. I've not had one take a topwater, yet. Many years ago down in Estes Flats I made notice that when I found grebes or loons diving and working we would usually find trout and redfish.

My first osprey experience was in the East Flats so many years ago that I have trouble accepting that I have grown this old. That bird called and circled repeatedly over a school of redfish; no doubt knowing they were too big, but hoping, I guess, for something smaller to show itself as the school worked the edges of the flat. Gary Clouse, my friend and excellent guide, had his eye on her the entire day as well.

On two occasions recently the weather and water conditions made it hard to locate where the fish were holding. Both times grebes and loons showed us the whereabouts of our quarry. In the 2007 Texas Trout Series tournament that Lowell Odom and I took second in, (who says nobody remembers who came in second), as we eased into our area an osprey hovered above the gut that I was looking to fish. On my first cast a 5-pound trout fell to a slow sinking Corky. Throughout the morning the osprey showed us bait we could not see. Time after time, 7M MirrOlures and Corky's produced solid trout to 6 pounds. So you see, we do not actually have to be able to see bait or bottom structure if we implement signals from our feathered friends.

I have honestly used and trusted this winter pattern all up and down the Texas Coast. Osprey in the Upper Laguna and Baffin are terrific indicators of baitfish and a diving loon or small group of grebes working the swag offshore of your wade should never be overlooked. I think when we are able to take a pattern that works for us on our home waters and use it elsewhere it starts to qualify as a predictable seasonal pattern, one we should become very familiar with and use whenever we can.

In closing I want to thank everyone that has e-mailed about my articles here in Texas Saltwater Fishing, even the few who did not understand or get the points I've tried to make. It has been a fun year for me even though fishing was not nearly as good as it can be in my area. Things are looking much better now and soon the floods of 2007 will be only a memory. Hopefully through the articles I've written you have learned how to better cope with such conditions and next time around you'll have a better game plan.