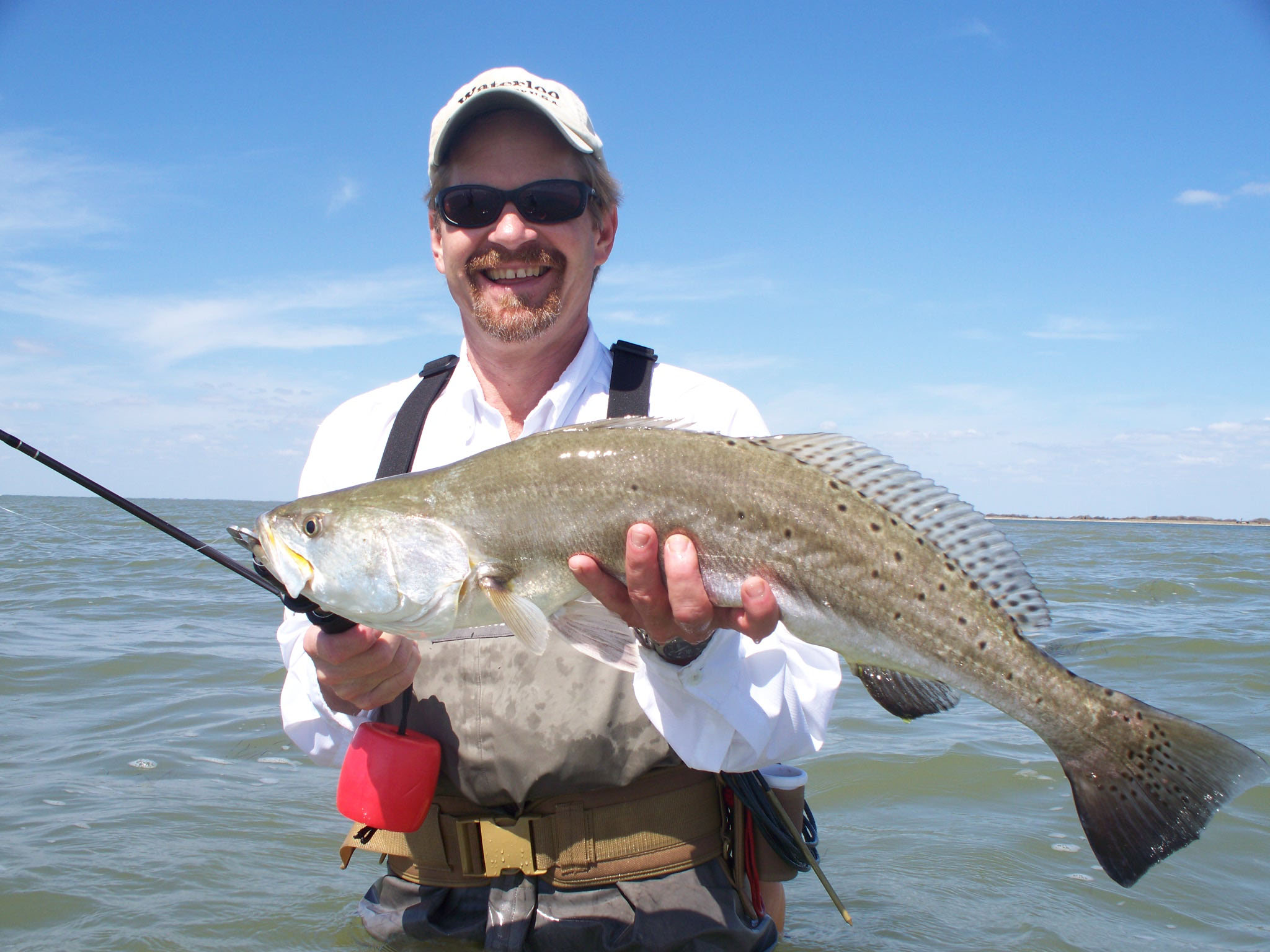 Beautiful catch and release trout by John Massengale out of large pods of mullet strung out along windward shorelines.
Amazing things can happen in a month's time. In fact, amazing things can happen almost overnight. Since about January the trout bite in Rockport has been more down than up, almost depressing at times for an old trout guide. There were small windows in the past months that gave me a shot in the arm concerning the next day's prospects. More often than not the pattern would not hold and the following days would be spent grinding, searching and coming up with excuses as to why we were not catching them.

The truth is probably simpler than many of us would like to think. See, we have become a society of fishermen that believe we can MAKE things happen. How many times have you heard a coach tell his team to go make it happen? There are many things in life that we can make happen but pushing a pattern or seasonal migration forward to fulfill our wants on a specific day is certainly not one of them. Every year I get worse at trying to push things forward. I remember something my dad said to me a few days before his passing. It's been more than 22 years and it still rings in my ears.

"You're going to have one major problem in the fishing business that I can see," he said. "I brought you up to go out and make it happen. You think you're good enough to make them bite everyday. Fish don't feed everyday and there are stretches when they might not feed for days. Weather patterns will have a major influence on the day's prospects as well. When you come to accept this and concentrate on controlling ONLY what you can control you'll enjoy your job more and be a better guide."

Well Dad, after twenty-two years, I can say you were right. I'm not that good and they don't eat everyday. Sometimes you just can't make it happen; you simply have to let it happen. Thanks for some great advice at a time when life was being drained from you. Love is strong medicine.

Patterns are seasonal but the seasons are subject to conditions that are constantly changing so they are undergoing change as well. If you listen to old slats many of them talk of how the seasons have changed over their lifetime of angling. I have noticed many changes in my almost thirty years of guiding. Through all of this the fish are having to adjust while still having to carry on the processes of maintaining their populations. A tougher job than we might think.

A week ago our trout fishing could not have been tougher. Then as if by Divine intervention the trout suddenly appeared. In last month's issue of Texas Saltwater Fishing I wrote about specific patterns that were productive at that time. By the way, thanks for the many e-mails and calls about the article, I am glad the suggestions worked for some of you.

Here in June and continuing into July, our winds begin to let up at night, allowing for early morning wades along windward shorelines where tides and months of strong SE winds have bait stacked along shorelines. As winds lessen the bait strings up and eases offshore. As if by some act of magic, trout of substantial size show up along the edges and beneath the large schools of mullet. Most of the mullet are large and tightly schooled. This creates a scenario that I personally love. When the bait is shallow, say two feet or less, your dealing with calm and clear water most of the time. Break out a Bone Diamond, Opening Night, Cajun Croaker or Croaker Shad 5-inch or 4-inch Bass Assassin and cast along the edges as well as directly under the baitfish. I go with a 1/16-oz lead head on a 1/0 or 2/0 short shank Mustad hook. Light and short on the jig head seem to be a deadly combo in my waters.

The sudden explosion of bait in the general vicinity of your lure will be followed by a distinct thump. If the fish runs straight at you leaving your line slack, you most likely have a sizable trout coming to see you. It has taken years of missing good fish to acquire the patience to simply point the rod towards the fish and crank until the rod begins to load.

With the loaded rod now in a lower position you will have a larger hook setting range. I like to roll my rod to my right, almost flat to the water when I strike a big trout that has blown in close to me. I'll let her swim past me as I crank if I feel she is looking straight at me. I like the fish to be on a slight angle before I take to hitting her. That first strike needs to be the one that buries the hook. If she comes to the top, get your rod tip down so you can keep her head down. Shaking and jumping is beautiful but not something we want them to be able to do. That is when bad things happen to us and when the stories of the one that got away get to flowing.

David Rowsey saw me miss a terrific fish this winter in his home waters. I simply never got caught up and she got up top and spit the bait. Lost the fish and a little religion that windy morning way down south.

As I write this article the above pattern is red hot in Rockport. Any shoreline, especially windward shorelines, where you can locate large pods of mullet strung out along the shoreline will have some 6-plus pound trout swimming near them. Trout of 18 to 20-plus inches have been very common for us the past few days. Reefs in the mid-bay areas that contain large concentrations of mullet stacked up right on top of the shallow crown will also be super productive. This pattern should hold for the next month or moon phase allowing you to catch and hopefully release a trout of a lifetime.

We can't MAKE IT HAPPEN but we can be prepared when it STARTS TO HAPPEN.

May your fishing always be catching.