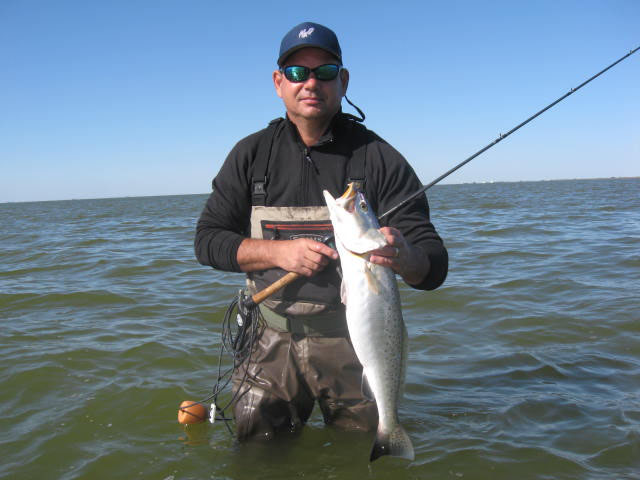 John Esley with a solid trout (CPR) caught in front of depression in sandbar last week.
If you have been fishing very much this year along the middle coast you already know that there are two areas that have been very good when it comes to catching speckled trout. Unfortunately, the Rockport area has not been one of them. Thanks to Mr. Red Fish we are keeping our heads above water but it has been tough. For my entire thirty-one years in the business, my clients are and have been trout fishermen. I have felt obligated to be perfectly honest with them about the state of the trout fishery, and this has cost me some days. Most still come as they are fishermen and enjoy the chase. To these folks I am continually grateful for the support.

The cause of our catching decline is not necessarily all man-made. Severe drought, lack of a major storm, closure of gulf-to-bay passes and fishing pressure have all contributed. We have had some bright spots but over-all it has been tough. Through all this I remain optimistic; it will get better and I will discover new methods of finding and catching them. They run; I chase. Sometimes they win; sometimes I do. They continue to be worthy adversaries.

TPWD data from 1977-2003 describes springtime salinity in the Aransas Bay complex to be 17.7 parts per thousand. At present, salinity is nearing 35ppt. Bay salinity is greatly dependent upon rainfall and the Coastal Bend has seen little of late. Thus far in 2009 the Rockport area is running about 13-inches below normal.

Danny Adams, my boys' grandfather, used to run a fish house on Fulton beach. Years ago when I was getting started in business, he told me that wet years yielded twice as many trout as dry years and I never forgot it. He backed his statement with purchase tickets of fish he bought and sold. My fishing logs reflect the same trends.

So what do we do when we are faced with truly tough conditions that challenge us mentally as well as physically?

First, I look for areas off the beaten path. I believe higher than normal salinity puts a lot stress on the trout. Life is just not as good and normal patterns are abandoned. Ease and comfort become paramount. I look for areas of cooler water and moving water. Cooler and moving equate to higher levels of oxygen throughout the water column. Therefore, I believe the stress of adaptation is reduced. Less stress leads to more energy and stability in feeding patterns, especially during prime feeding periods. You will need to be attentive to the major and minor periods and plan your day accordingly.

Remember, an area with no fish prior to a major feed period does not magically grow fish. We still need to be where the fish are in order to experience the true effects of the major or minor feeding period.

I like small cuts through reefs and sandbars during times like these. Bait holding over shallow shell and sand edges gets swept along as current pushes through the cut and the mouths of these cuts are often staging area for predators waiting for a meal to be pushed their way. Recently, the mouths of cuts and drains have been my go to areas.

On a recent trip to Baffin I fished the popular Tide Gauge Bar and had a great day on fish over 25 inches. The key, which I discovered on my long wade back to the boat, was the cuts through the bar. Each low spot that allowed flow gave us a couple of solid 5-pounders. As I crossed the second low spot I muttered to myself in my best Forest Gump, "I may not be smart but I know what a pass is."

Reaching the boat I had already thought of several areas along the south shoreline that might provide the same setup. My pattern had been set and I was totally comfortable sticking with it for the rest of the day. By the way, it did not payoff too well that afternoon but it did prove to be a moneymaker later in the week.

I also like reefs that have large areas of broken bottom within the confines of the reef itself. You might call it a structure within a structure. These types of structure are common to the Rockport/Port O'Connor bays. You'll have the tightly packed shell, but somewhere on the inside there are areas of broken bottom, a mixture of scattered shell, sand, and grass. In my home waters, St. Charles and Copano seem to have an abundance of this type of reef structure. More times than not the trout are concentrated in the scattered shell, sand and grass habitat versus the packed shell areas.

My lure selection is slanted heavily toward the clear side. I like soft and hard baits with lighter body color and lots of sparkle. I believe trout react instinctively to the glint of the lure. In my mind sparkle and flash are realistic features of live baitfish and help sell the presentation, especially when dealing with stressed fish. Boil it down to two words; realism sells. I want instinct to take over at crunch time. She sees the glint of the lure and instinctively identifies it as a target. The reaction can be immediate, quite often the strike comes as the bait hits the water. Bass Assassins in Bone Diamond, Opening Night, Cajun Croaker and Croaker Shad in both 5" Shad and 4" Sea Shad are absolute musts for your box. The MirrOdine by MirrOlure in clear/silver is also a favorite of mine.

By targeting smaller, more defined areas (cuts and drains) you place yourself where numbers of fish can be concentrated. When fish are concentrated, competition often creates a feed that might not normally exist during stressful conditions.

At press time we still do not have normal conditions. Still no significant rainfall and hot, dry wind continues to gust to over 30mph on a daily basis. Salinity levels continue to rise all the while. Tough trout times, no doubt, but by narrowing the playing field you might find yourself in one of the best trout bites you've had in a long time. My dad always told me that the cream rises to the top. Fish smart, it's time to start climbing.